• 2:00 – The Hold Steady – We made it in with enough time to catch the end of the Hold Steady. I’d seen them last year at Intonation and I never really got the fuss. It’s starting to sink in now, so I think I’m going to have to give their record a listen. In this age of MP3s, sometimes it’s hard to take the time to sit down and really listen to an album. But I think they’ve won me over. MP3: Your Little Hoodrat Friend (from Separation Sunday). 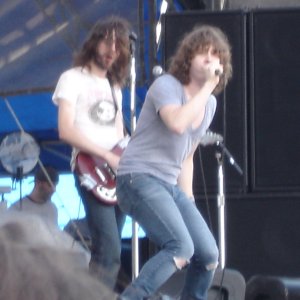 • 2:30 – Ben Kweller – I’m a big fan of Ben Kweller and I still listen to Sha Sha once a month. His follow-up wasn’t great, but I’m still looking forward to his next album. He played several new songs at this show and they sounded good. “I’m still not done with my childhood,” went the chorus of one, and it’s clear just by looking at the kid that this is the truth. I’m still excited to see where he ends up. I’m hoping the new album sees a return to the harmonies and layering that made Sha Sha such a pleasure. Don’t fear the pretty, Ben! MP3: Penny On The Train Track (from the new album).

• 3:30 – Andrew Bird – He’s an expert whistler. There’s no denying that fact. It’s pretty amazing. And his whole live layered loop thing is pretty cool. At least once. But once you’ve seen it, you kind of wish he’d do something different. The album is good, but it’s a bit of a snoozer. A real live band might have raised the energy level a little. MP3: A Nervous Tic Motion Of The Head To The Left (from The Mysterious Production of Eggs).

• 4:30 – The Shins – Dang, that Garden State is a popular movie! It would’ve been nice be able to get even sort of close to the stage, but it wasn’t meant to be. That’s a bit of a cop-out. I was lazy and didn’t really feel like navigating the crowd. My blanket and my Cheez-its were treating me too nice to just up and ditch them. Sorry, Shins, I’ll catch you next time. In a dinner club, preferably. Do they even have dinner clubs anymore? I bet the Shins would be perfect dinner club music. MP3: Kissing The Lipless (from Chutes Too Narrow). 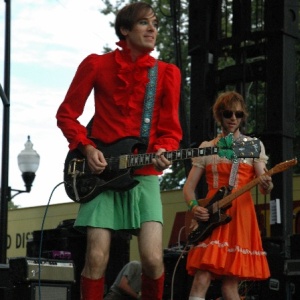 • 5:00 – Of Montreal – Quirky, dancey, indie pop. Great hooks, solid songs. The thing I hadn’t expected was the costumes. Fantastic. They somehow got a bunch of sweaty, jaded festival attendees to shake some ass. Well done! MP3: Disconnect the Dots (from Satanic Panic in the Attic)

Fetal reaction: Five kicks that seemed a little gay, but were definitely happy. 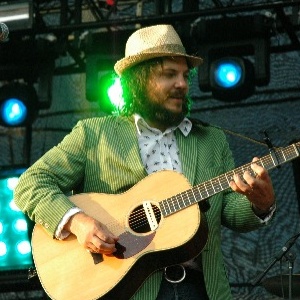 • 6:30 – Wilco – I’ve got to admit that I hadn’t been caring for Wilco lately. I figured it was just a normal trough in my cycle of obsession. I’d been a bit of a fanatic, really. But ever since A Ghost is Bored I’ve had a hard time giving a shit. I mean, really. How many shows can I be expected to go see in support of an album I didn’t even really like. That’s a bit harsh. There are songs I liked on it. But jeez, guys, release another record already, so I can figure out if I still like you or not. Because when you play a show as great as you did at Lollapalooza, I get all confused. I thought you had become all grumpy and arty and serious and annoying, and then you come out in a straw hat like an American tourist, and smile and joke throughout your whole set, all humble and gracious! What am I supposed to do with that? How can I feel betrayed by you when you say things like, “I haven’t had zits since my early 30s”? So I guess I like Wilco again. But just so I don’t sound like a raving fanboy, I would like to point out that one of the new songs (“What Light”) sounded like a Dead song; at least Nels Cline’s guitar part sounded exactly like a Jerry solo. MP3: Handshake Drugs (from the More Like the Moon EP).

So yeah, overall Lollapalooza was a good time. It’s a blast to be able to catch that many bands in such a short amount of time. Not sure if I’m going to be able to make it next year (with a new baby and all), but hopefully they’ll finally figure out the fucking sound bleeding by then. And maybe concentrate all the good bands onto either the north or the south side of the park. Perry, if you need any help separating the wheat from the chaff, let me know; I’d be happy to help.