Mary Weiss, lead singer of the Shangri-Las, has signed to Norton Records. This spring in New York, she’ll begin recording her first new material since 1965, backed up by Memphis punks the Reigning Sound with Billy Miller and Greg Cartwright producing.

Mary is selecting from a batch of great new comps from today’s most talked-about songwriters including Greg Cartwright, John Felice, Andy Shernoff, Jackie DeShannon and others TBA. Mary’s first album of new material since 1965. Mary is geared up for her return to the studio and stage, and so are we! Mary was fifteen years old when she and her sister Elizabeth (Betty) began singing with identical twins Margie and Mary Ann Ganser in their Cambria Heights neighborhood of Queens, New York, as students at Andrew Jackson High School. They soon came to the attention of George “Shadow” Morton and shot into the charts with massive hits on the Redbird label including “Remember (Walking In The Sand),” “Leader Of The Pack,” “Give Him A Great Big Kiss,” “I Can Never Go Home Anymore,” “Give Us Your Blessings” and “Out In The Streets.” The Shangri-Las gave a voice to real teenagers, with Mary’s explosive lead vocals delivering emotion packed melodramas that made them one of the most consistently exciting groups of the day. Look for our interview with Mary on the Norton website in April, when you will learn where she’s been and where she’s going, setting the record straight about her days as a teenage rock and roll star. Says Mary: “I’m excited by the opportunity to work with Billy, Miriam, some great writers and a kick ass rock and roll band!” Hail, Mary Weiss, ultimate cultural icon! 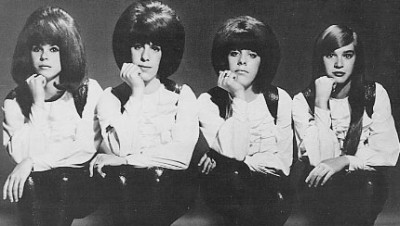 (Mary Weiss is the cute blonde on the right.)

Watch video of the Shangri-Las performing “Give Him A Great Big Kiss”, “Right Now and Not Later”, and “Twist and Shout” (with Dobie Gray) on Shindig via the always great Bedazzled.

Check out the Shangri-Las’ Myrmidons of Melodrama for 33 tracks of teen-queen bliss.

8 thoughts on “The Shangri-Las’ Mary Weiss Signs to Norton”