Before we get to the interview, though, let’s take a look at the makeup of this new collection. There are 24 songs spanning two discs. 12 on each, just like Elliott Smith and Either/Or. Coincidence? No way. Every effort has gone into putting this out in a way that would be consistent with Elliott Smith’s vision.

Three have been officially released before on compilations: “See You Later,” “Angel in the Snow,” and “Big Decision.” And studio versions of both “See You Later” and “Half Right” appear on Heatmiser’s Mic City Sons.

GLONO: There are 24 songs on New Moon. How many additional unreleased masters are left in the vault?

LC: There’s no way to really answer that question. Some unreleased masters are different takes of released songs, therefore not necessarily “new” songs. Some are “rough” sounding, so releasing them is a hard choice.

GLONO: Is this “it” as far as the new, not rough sounding material from this period? Or were there any songs that were left out for other reasons?

LC: There is other music. In some cases the tracks not used seemed too different to fit in, and in one case we didn’t even know from where, when or who was on a track (that we discovered right near the end of mixing) so it was left off. There is the possibility that unused tracks of decent quality could be used as compilation tracks, or such, in the future.

LC: Ha ha. Not yet. We’ll be backing up all the recordings we have in storage soon, and then I have to catalog all the songs and individual tracks. It will take a long time…

GLONO: Are there live recordings in the archive?

LC: There are. Work on cataloging the live recordings could happen after the studio work is done. When that will be, I don’t know. I have a lot of work ahead of me right now!

GLONO: In your review of the Beatles’ Love in Tape Op you mention some studio trickery (combining takes, time compression, etc.) involved on one song on New Moon that had a flawed guitar track. Which song was it?

GLONO: Were there other times you wanted to do things like this but resisted?

LC: There were very tiny edits made to fix things, mostly really to clean up extraneous noise, like tape deck punch ins!

GLONO: How “finished” do you think the songs on New Moon were?

LC: Most of the ones that were tracked on the 8-track 1/2″ machine were pretty well done, the same as tracks from Elliott Smith or Either/Or. I was really just balancing the mix and adding very simple, light EQ or compression to some tracks. Nothing fancy or over-the-top.

GLONO: Can you describe your process of mixing? I know mixing can mean a lot of different things to different people. You transferred tracks into Pro Tools, and then what?

LC: Put the individual tracks up on a console, like you would with tape. Then just balance out levels so it makes sense. I would reference “leaked” MP3 versions for mix ideas, and reference Elliott Smith or Either/Or as they are from the same time period and Elliott was involved in the mixing. I tried to use similar panning and level choices as what he had done in the past. The songs were mixed out of the board (Allen & Heath Saber) back into Pro Tools (at 96 kHz/24 bit) through Apogee Rosetta 800 converters both directions. The tape deck for playback of the original tapes was a Tascam 48, loaned to us by Chris Walla of Death Cab For Cutie.

GLONO: Was it pretty much adjusting levels, or were you more “active” (adding effects, etc.)?

LC: Some effects, not much on voice (maybe a little echo a few times). I just really tried to mix in the same ways that he had done before – make the new CD fit in with Elliott Smith or Either/Or. Even mastering involved trying to match those CDs.

LC: Whatever. All that matters is that the music connects to people in the end.

GLONO: But he was pretty comfortable in the studio, wasn’t he?

LC: Very comfortable and knowledgeable in the studio.

GLONO: Do you know what kind of gear the stuff on New Moon was recorded on?

GLONO: Were there technical challenges in turning these recordings into releasable quality?

LC: Some tapes had gone “sticky” and had to be baked [explanation of tape baking via Larry’s pal Eddie]. We hired Mr. Toad’s in San Francisco to do that work and they would bake the tape and then transfer to digital files. In a case like that you might only get one chance to recover the music off the tape, so the question of not using Pro Tools (or possibly another deck) is kinda moot. They also transferred 16-track 2″ tapes that I didn’t have a headstack for at the time (I do now).

The 1/2″ 8 track 15 ips format is fairly crummy as far as the “good” things that analog can offer. Transferring each song individually before mixing allowed me to get the best levels off tape and maximize the quality of each song. But it was a pain!

GLONO: Many of these songs have been passed around by fans as mp3s of varying quality over the years. For people who have heard those mp3s, how much of a surprise will there be in hearing New Moon?

LC: I think many of those MP3s are from cassettes copied off Elliott’s rough (or possibly semi-finished) mixes. I think the sound is certainly better on New Moon, and there are songs that I have never seen leaked before.

GLONO: People think of Smith as a gloomy guy, but I’ve read that he was actually playful and fun to be around. Got any stories that might reveal this “other” side of him?

LC: He was certainly not a one-dimensional person! One of my favorite memories is seeing him sitting on a couch with my stepdaughter on her birthday. She was a teen and a big fan of his music and it was so nice of him (at Joanna Bolme’s prompting) to come over that day and talk with her.

He could be very funny as well, moonwalking, musical jokes and silly shit. We had a good time building Jackpot! Recording Studio and working on sessions. I miss him still.

New Moon will be released May 8 on Kill Rock Stars. Buy it. 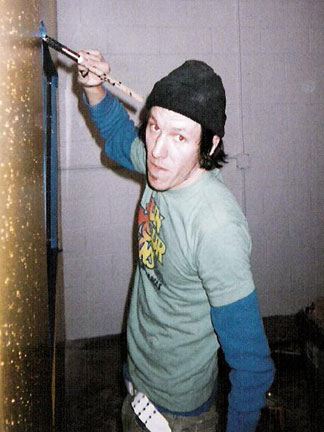 Lucky Three, a film by Jem Cohen with music by Elliott Smith