Now settled, the band begins to ease into a discussion focused on the creative brainchild which has fused a musical brotherhood while molding a sonic texture of urban blues, soul and melodic expressiveness.

“We feel we can write songs that are still unique while borrowing from a lot of different things,” says a soft spoken and aesthetically rough around the edges Matt Maust. “I think as a band we have something meaningful to say.”

“Since the start of this band we have not looked so much at the big picture but rather focused on writing songs, recording them, and touring,” adds Jonnie Russell. “The organic approach has always worked well for us.”

With his band mates now engaged Nathan Willet rests his cup of coffee upon the table and weighs in on the project, “the songs musically and lyrically tell stories. They are stories about people with some of the characters being fictional and some are built from people we know.”

“They are stories about experiences and trials. Sometimes the message is straight forward, such as, ‘don’t envy people who have more money than you and be happy with what you got,'” explains Willet.

Recording the LP in Los Angeles, the band’s sessions were completed quickly and mixed by veteran rock producer David Sardy.

“Those sessions were marked by dim lighting and live music,” says Russell as a plate of flattened bread and assorted vegetables is placed before him with a curry based spread to bring the dish together.

“Sardy would pound out a mix and come to hang out for a couple hours. He is filled with all of these cool stories from hanging out with everybody you can think of. He has sort of a Rick Rubin story to him where he came from doing the music he loves. He is true to himself and I saw that on the first day,” explains Russell as he maneuvers a section of blonde hair away from his face.

By this time a small dinner crowd occupies the restaurant as Eastern grooves are echoing over the dialogue.

Willet continues as he sizes up his own dinner portion, “So after the sessions in California we wanted to name the record something appropriate for the characters in the songs and we decided on Robbers & Cowards.”

“The words have many different meanings,” adds Maust from the opposite end of the table. “I mean, fifty years ago if you called a man a coward he would probably punch you but now it is more of a funny word. Robbers could be cowards, depending on how or what time of the day you steal.”

“That was well put. I like that,” says Russell as he playfully heckles from across the dinner slab.

“Because robbing the blind, that is pretty cowardly,” replies Maust as laughter ensues.

Musically mature, their bloodline of influential artists divulges deep into the core of American recordings.

“I was influenced heavily by the work of the Velvet Underground, Art Blakey, and Thelonious Monk,” explains drummer Matt Averio. “I have a recording from 1965 in San Francisco and to hear Thelonious play piano is a really beautiful thing.”

“For me, personally: Bob Dylan, Neko Case, Tom Waits, and especially an album by Nick Cave, From Her to Eternity,” adds Maust.

With dinner completed, Willet proceeds to lean back against his seat, giving a healthy stretch revealing a tattoo of a blackened brass trumpet on his inner right forearm. He respectfully signals the waitress for another cup of coffee as the conversation is directed to the evolving aspects of the music industry.

“The way modern media works is a great thing for us as artists. People can have instant access to you, find out about your band, and listen to your songs so easily. You don’t have to have a record in a store anymore or a distribution deal,” explain Russell. 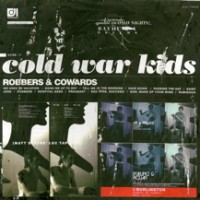 “Don’t get me wrong,” he continues, “from hearing a record that none of your other friends know about, to actually walking into a store and buying it is an experience that is irreplaceable. That sort of magic came from people having bought records in the past and their loyalty to the music. It was so much different than it is now. It is hard to feel the same way about the band that you love in the flurry that is media now. There is just less mystery involved. Traditionally all you had was the record. So you would wait in anticipation for your favorite artist’s next record to come out or maybe they would come and play your town.”

Night has now completely engulfed Manhattan as sports scores can be seen rushing by the window from atop a legion of taxi cabs as the fold heads back out under the stars. After a couple blocks of shared passage the Cold War Kids vanish as quickly as they appeared into a sea of pedestrians down 8th Avenue.

With their record in circulation and the buzz growing, the band is set to leave their internet base and coastal circle by coming to your town with a nationwide tour booked for the Spring of ’07.

Full disclosure: The label rep picked up the dinner tab.

The Cold War Kids offer lots of MP3s for you to download:

• The Soloist in the Living Room

From Up In Rags:

From With Our Wallets Full:

• Tell Me in the Morning

• Fast As You Can (Fiona Apple)

• Tonite, You Belong To Me (Lawrence Welk)

• The Littlest Birds (Be Good Tanyas)

“Hang Me Up To Dry” on Letterman