I showed up early to see the Fratellis. I really like their album, Costello Music, and they played pretty much the whole thing. That’s the great thing about seeing a band that only has one album: they play all your favorite songs. A three-piece from Scotland, they might be riding the coattails of the Arctic Monkeys and the Libertines, but they do it well, and they kicked it live. Loud, too. But between songs, you could hear the side stage behind them; it actually came through the Fratelli’s microphones, which was only funny because you could no longer hear it once they started playing.

Next for me was Son Volt. I saw this band ten years ago in Ann Arbor and the crowd sat down through their entire set. I never picked up any of the recent Son of Son Volt albums, but I listened to The Search a few times and it’s good. But I didn’t expect to be blown away by their live show. Even though they didn’t play anything familiar from their original incarnation (until the final song: “Drown”), the songs were powerful rock and roll, and Jay Farrar’s voice is as amazing as ever. I wish he’d play some lead guitar though, but I guess Izzy/Keith did a fine job. 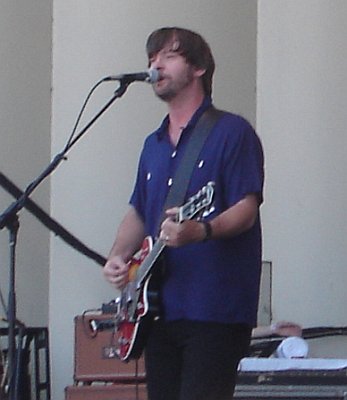 All the cool people were over on the other side of the park seeing Ted Leo (who played Pitchfork last year), so it was just me and a bunch of shirtless dudes and old men watching Son Volt. I guess some snarky little bastards would call it “dad rock,” but you know what? Me and all the guys I was listening to Son Volt with ten years ago, we all have kids now. So embrace it! I’m a dad and I like dad rock. Get off my lawn.

From inside the portapotty, the Polyphonic Spree‘s first song sounded exactly like Arcade Fire.

Sparklehorse was the entire reason I got out of bed Friday morning. Good Morning Spider is one of my all-time favorite albums, and I had never seen them live. So I was excited. And they didn’t disappoint me. They realized pretty quickly that a daytime slot at an outdoor festival was not the place to play slow, quiet songs, so they played a lot of the louder, fast stuff from their first two albums. Which was great. 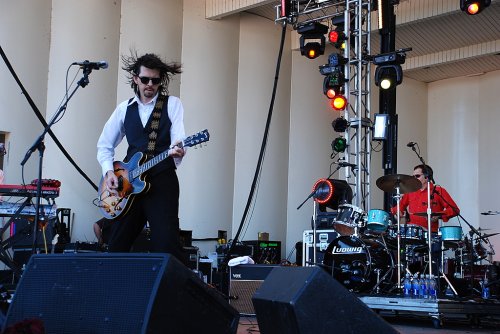 Finally, nearing the end of their set, with Electric Six clearly audible from the side stage, Mark Linkous said, “Fuck it. We’re gonna do a quiet one.” Later, they played “Homecoming Queen” (“another quiet one”), but closed their set with the rocker, “Someday I Will Treat You Good.”

Then I went home. My man A.M.P. stuck around for M.I.A., G. Love, Satellite Party, LCD Soundsystem, and Daft Punk though. So we’ve got you covered. In photos, anyway. 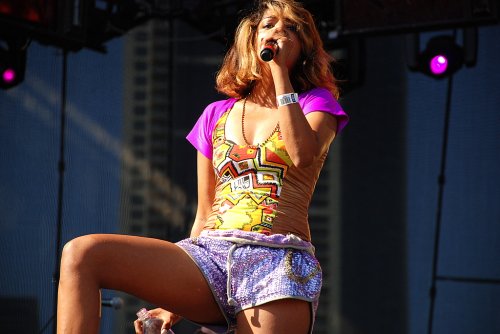 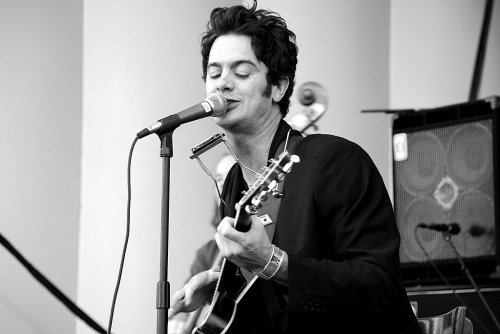 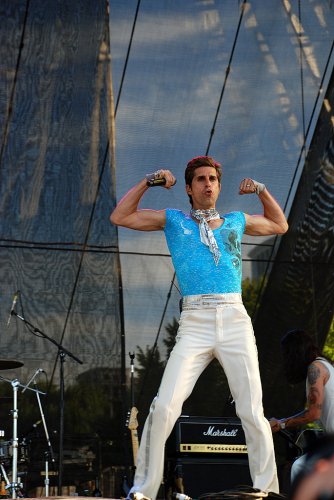 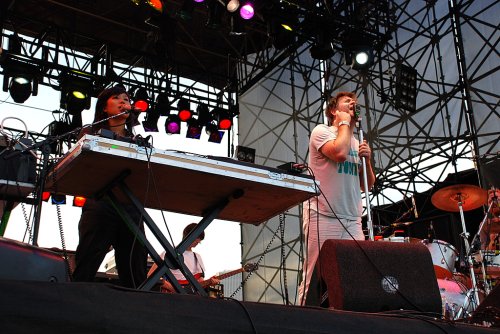 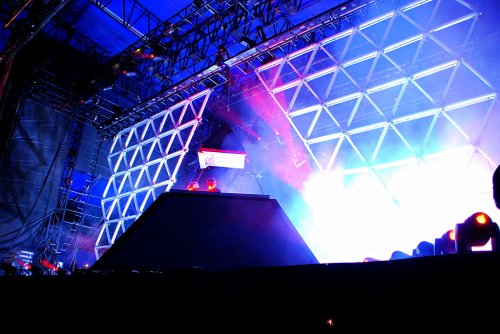 Looking at the schedule, I would’ve been happy to skip this day altogether. There was nothing I felt I had to see. Every band I recognized was either someone I’d seen before (Spoon, Hold Steady, Interpol, etc.) or someone who bugged me (Cold War Kids, Clap Your Hands, Interpol, etc., etc., etc.).

But man, I’m glad I showed up because — totally by accident — I had a great surprise.

The plan was that halfway through the Roots (who, by the way, were pretty great) to start walking south to eventually end up twelve miles away at the Hold Steady stage, stopping by Roky Erickson along the way. I love American psychedelic music as much as anybody, but I felt that I’d seen enough of the former 13th Floor Elevator after one song, so I kept walking. 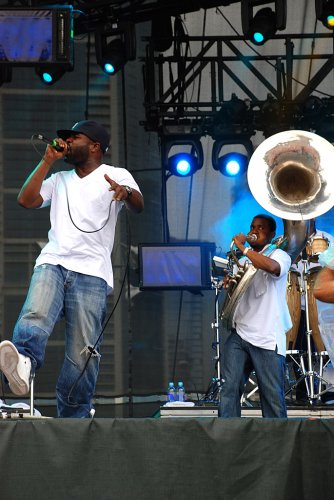 I’d heard that CSS (who played Pitchfork last year) had canceled for whatever reason, but I didn’t know what they were going to do with that stage. Turns out they asked Matt and Kim, who had already played the 11:45am slot, to do another set. Boy, for once in my life I’m glad that American customs agents are fascists, because if CSS had made it into the country, I never would’ve known how great Matt and Kim are. Matt sings and plays keys, Kim drums, and they play great songs. That’s all I know about them. They were the highlight of the day for me, and I was not expecting that at all. 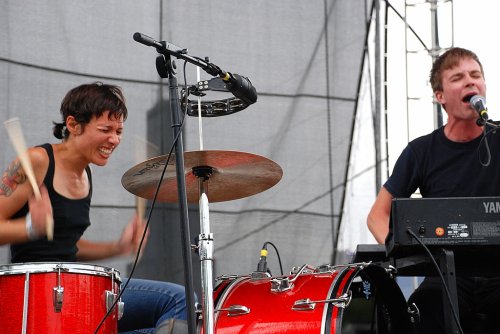 That’s one good thing about having 50 million stages: you have to walk by about 12 of them to get to the band you think you want to see. And once a year, if you’re lucky, you’ll accidentally stumble across something great.

The Hold Steady is a solid rock and roll band, and perfect for the outdoor festival circuit. Which is good since they just played Lollapalooza last year and Intonation the year before. But they’re great, and I appreciate their recordings more every time I see them live. It really is the perfect soundtrack to that feeling you have after spending all day in the sun, drinking beer, getting loaded, and bumping into strangers.

Then I went home. A.M.P. stuck around for Yeah Yeah Yeahs, Spoon, and Muse. So we’ve got you covered. 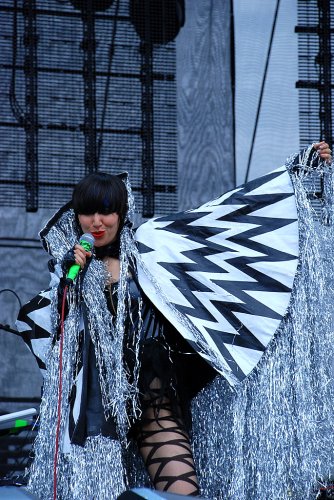 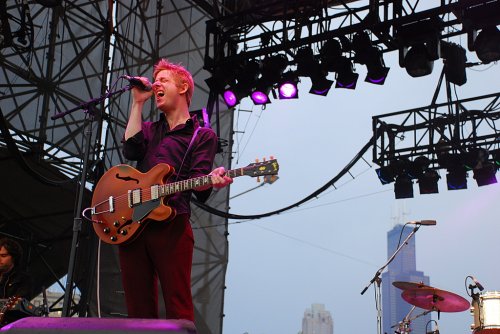 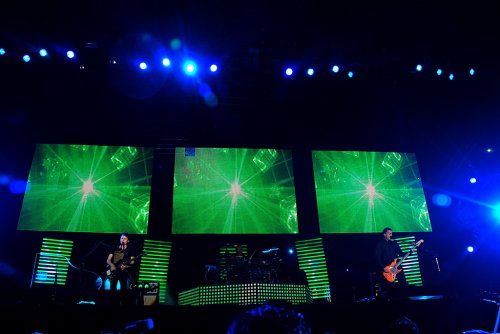 In addition to Sparklehorse, the Stooges were the other band this year I was really anticipating. And they did not disappoint me. Iggy’s still as cool as ever. Everybody’s ripping off Iggy’s moves and most of them don’t even realize they’re doing it. The Stooges (with the MC5) invented punk rock and prove once and for all that punk would have been equally important and influential had it never crossed the Atlantic Ocean. The Brits turned it into a cartoon caricature, a fashion statement, and a particular sound. In America, punk was an attitude and the music was diverse and weird and individual. 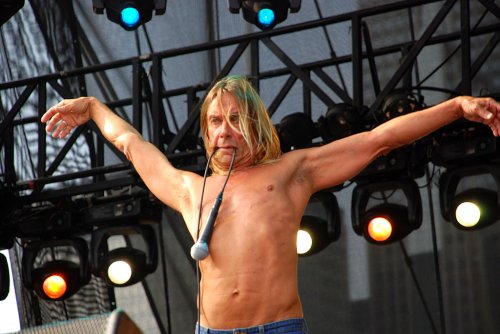 But whatever. It’s 40 years later and Iggy and the Asheton brothers are reunited and that’s good enough for me. The best part was when hundreds of kids rushed the stage. Iggy egged them on by going immediately into “No Fun.” I still have no idea how they eventually got them off the stage, but you know very well that lives were changed for those kids. That was a moment. And even if the dudes in the band could be their (great?) grandpas, there’s no questioning that the music appeals to the dopey teenager in all of us, across generations, over the ages.

Speaking of American punk rock, Yo La Tengo doesn’t give a fuck what you want to hear them play or what you think is appropriate for an outdoor music festival. I hadn’t planned on sticking around for them. The original plan was to cut out halfway through the Stooges and walk over to catch Peter Bjorn and John, who everybody tells me are not just a one-hit wonder. But I couldn’t leave the Stooges. What was I thinking?

So, by the time the Stooges finished, PBJ had already started and I knew that every cool kid in the park was going to be crammed into the side stage area to see them. And since at that point there was no chance in hell that I was even going to be able to get even sort of close enough to enjoy it, I decided to follow the philosophy I picked up many, many years ago in an enhanced state of mind: Why move? You’d be surprised how often this mantra comes in handy.

Anyway, I think it’s badass that Yo La Tengo played not one but two 10-plus minute long songs in their set. 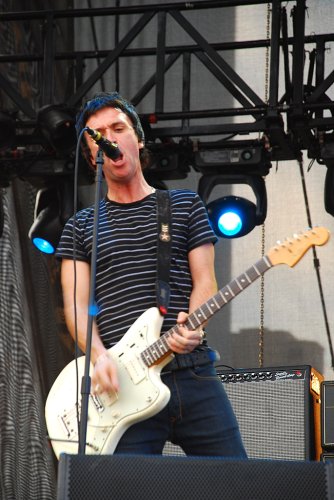 And then there was Modest Mouse. It’s been a while since I’ve seen my man Johnny Marr. I first saw him with the The in Detroit, then a few years later with Electronic in Glasgow, and most recently with the Healers here in Chicago. He’s still cool. And Modest Mouse is good too. 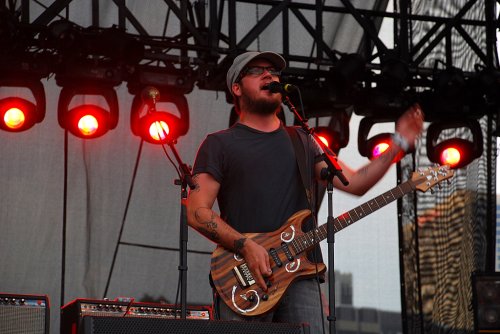 I’ve come to appreciate Isaac Brock’s vocals after I stopped hearing David Byrne and started hearing more of a Black Francis thing. Which, obviously, is way better. At the end of their set, they played “Float On,” and thousands of people of all points along the hipster continuum shook their sweaty asses. Together in indie rock.

And then I went home. I saw Pearl Jam at the second Lollapalooza back in 1992, and I never liked them anyway. I respect Eddie Vedder and he seems like a really good guy, but I don’t like his band.

So that was my Lollapalooza this year. We’ll have lots more photos ready later. Stay tuned.

All photos by Alan M. Paterson except for the crappy, blurry one of Jay Farrar.

• The Stooges – streams at myspace.

One thought on “Lollapalooza 2007: Hit it and quit it”