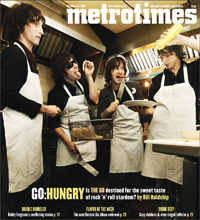 Detroit Metro Times has a cover story about the Go:

“The Go are completely overlooked, get little respect, and it makes me nuts,” says Ivan Suvanjieff (aka Mark Norton), the former Detroit rock scenester, Ramrods leader and CREEM editor, who’s become something of a “spiritual adviser” to the band. “I really feel that people have been force-fed so much crap now for decades that they are most likely to miss what’s truly worth the trouble, truly worth the money.”

A familiar story, for sure, but still. Why are so many undeniably great rock and roll bands getting ignored not only by the mainstream (which isn’t much of a surprise) but also by the goddamned hipsters who oughta know better?

MP3: The Go – “Invisible Friends” from Howl on the Haunted Beat You Ride, out now on Cass Records.

One thought on “Metro Times on The Go”