Aw shit. Looks like Morrissey and the NME are at it again. Haven’t read the NME article yet (we’ll be sure to post the link as soon as it’s available), but it sounds like the same old story. I.e., “a man in his 50s looking back nostalgically on the England of his youth” interpreted, once again, as racism. 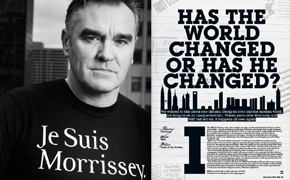 Mega-manager Merck Mercuriadis is on the case, kicking ass and taking names, as well as announcing that “Morrissey signed his new record deal with Polydor / Decca.”

Update: BBC has the offending quote (after the jump)…

“Although I don’t have anything against people from other countries, the higher the influx into England the more the British identity disappears. So the price is enormous.

“But travel to England and you have no idea where you are,” the singer is reported to have said.

The 48-year-old, who has spent the last decade in Rome and Los Angeles, was apparently responding to a question about whether he would return to live in the UK.

In a follow-up interview concerning his comments, the NME reported that Morrissey had said: “It could be construed that the reason I wouldn’t wish to live in England is the immigration explosion. And that’s not true at all.”

“There are other reasons why I would find England very difficult, such as the expense and the pressure,” he said.

He is alleged to have added that he did not think his comments were inflammatory, but were “a statement of fact”.

Never one to shy away from publicity, is he?