Everybody who’s within driving distance from Kalamazoo, Michigan, should head out to Kraftbrau Brewery on Saturday night for a fantastic fundraising event for Detroit 60s punk, Question Mark, who lost his home, his dogs, and all of his possessions in a terrible fire in January.

Not feeling particularly charitable? No problem: you are guaranteed to get your money’s worth out of this show. ? & the Mysterians still put on a hell of a show. Doubt it? Come out and see for yourself that there’s more to this band than their classic stomper, “96 Tears.” Seriously, if you’re not impressed, find me and I’ll personally refund your ten bucks.

And as if seeing a legendary garage band (with all the original members!) isn’t enough, GLONO faves the Sinatras are opening up. These guys rarely play out these days, so seize this opportunity!

Details and more info after the jump, or here… 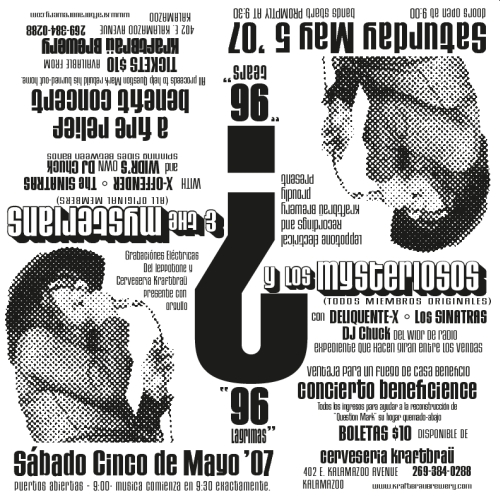 The original Question Mark AND THE MYSTERIANS

With special guests X-Offender and The Sinatras (DJ Chuck, host of WIDR FM’s “Down In Flames” will spin sides between bands.)

In 1966, five Mexican-American teenagers from Michigan became the first Latino rock group to score #1 on the Billboard Hot 100 charts with their song “96 Tears.” You know the song even if you think you don’t. The rollicking hit, fueled by an unforgettable organ riff, was an instant classic that remains a radio favorite to this day. That group was ? and The Mysterians, fronted by a high-energy sprite of a kid who legally changed his name to “?” (“Q” to his friends) and was never seen without his mysterious wrap-around shades. Their “96 Tears” album, and the1967 follow-up “ACTION!” were rife with should-have-been-hits that are now recognized as classics of the garage rock genre, with sound and attitude that paved the way for later punk and new wave bands. However, at the time that “Action” was released, the days of teen rock bands topping the charts were beginning to wane in the face of “heavier” AOR sounds, and the band faded away. With the encouragement of a new generation of fans, however, the original ? and the Mysterians began playing garage rock festivals in the 90’s and quickly became audience favorites for their unspoiled, dance-happy, classic mid-60’s sound and the unstoppable performance style of the eccentric and ever-charismatic Q.

NOW Q NEEDS YOUR HELP!!! In January of this year, Question Mark’s Clio area home, which he shares with longtime manager Luverne Thompson and his wife Joy, burned to the ground. All of their belongings, along with 40 years of music memorabilia were lost. Q says, however, that the hardest blow for him was losing four of his beloved dogs and a pet cockatiel. Q has no insurance, which makes the loss incredibly difficult to overcome, but he is still unstoppable when he gets on stage. See for yourself on May 5! All profits from the evening will be placed in Q’s relief fund.

Cost: $10. All profits go to the Question Mark Relief Fund

Question Mark And The Mysterians
Info/contact (and sites to visit if you want to help but can’t make it to the show):