It was forty years ago today that The Beatles released Sgt. Pepper’s Lonely Hearts Club Band and changed the face of popular music. In the time since then, the album has faced a tremendous amount of examination and its place in history has come under increased scrutiny and debate.

There are a growing number of music fans and critics that challenge Sgt. Pepper’s rank as not only the definitive statement of the Beatles, but the notion that the album is ground zero for conceptual pop/rock music; the building block of anything that strives to be more important than perhaps the original intent of the genre allowed it to be.

I wholeheartedly agree that there are indeed better albums to be found among The Beatles’ catalog, but I am not ready to distance myself from the fact that Sgt. Pepper’s Lonely Hearts Club Band remains not only as the first album new fab four converts should acquire after discovering them, but it’s also…and still…the greatest rock and roll album of all time.

And that smug little part of your brain that made you want to automatically argue with me is, in fact, the direct result of Sgt. Pepper itself.

There is some truth that the album doesn’t contain some of the band’s best individual contributions. Sgt. Pepper is obviously Paul’s baby: out of the twelve tracks, over half are McCartney’s and it’s been well documented that he’s responsible for the overall “concept” of Sgt. Pepper. It is, admittedly, a very loose concept that doesn’t go much beyond the title track, the bookending reprise, and the alter ego cover art depictions. Don’t go trying to find additional threads to tie things together; consider what happened to Robert Stigwood when he tried to make a screenplay out the Sgt. Pepper theme in 1978.

It’s also true that some of the material from Sgt. Pepper isn’t on par with the band’s more acknowledged classics. I mean, “When I’m Sixty Four” ain’t no “Hey Jude.” (Hell, Paul wrote the thing when he was fucking sixteen!) Lennon’s “Good Morning, Good Morning” isn’t on par with “Tomorrow Never Knows,” and even “Being For The Benefit Of Mr. Kite” was completely ripped from a turn of the century circus poster.

At the same time, “A Day In The Life,” “Lucy In The Sky With Diamonds,” and “Within Without You” are perhaps three of the greatest Beatle songs ever, with the lyrics effortlessly matching the wide-eyed production strategies.

But then again, Sgt. Pepper isn’t about the lyrics, is it? It’s about how the trainwreck-on-paper of sequencing “When I’m Sixty Four” after “Within Without You” somehow works, how the strings of “She’s Leaving Home” manage to turn a sappy tale of a teenage runaway into high drama, and how 24 measures of orchestral crescendo ended up becoming the greatest album closer ever.

The attention is in details like this, and it’s obvious that the band spent a lot of time with George Martin working on those details between December 6, 1966 and April 1, 1967. With the Beach Boys’ Pet Sounds clearly used as a reference point and Pink Floyd’s The Piper At The Gates Of Dawn its schizophrenic doppelganger (that was, literally, down the halls from them while they were recording), Sgt. Pepper surpasses both in terms of scope, passion and relevance.

It’s not my place to debate what I feel is the best Beatles album (if you want to, I’m choosing Rubber Soul), but I do feel the need to support the album that is, like it or not, the clear pinnacle of the band’s achievement. Meet The Beatles (or With The Beatles for you picky Anglophiles) may have matched Sgt. Pepper in terms of popularity and influence, but it didn’t change the perception that (for better or worse) rock music was actually a legitimate form of art. Until that point, there was always a certain amount of pomposity towards rock and roll. Sgt. Pepper touched on so many different genres, and did so quite effortlessly, that it forced the arrogant to reconsider rock’s place and consider it as more than just fodder for uncultured teenagers.

All of this, it seems, has been thrown out fairly recently, in favor of some tired 13th generation “kill your idols” bullshit that seems to attribute Sgt Pepper’s continued praise with some Baby Boomer conspiracy theory.

One of the leading proponents of this movement is Jim DeRogatis, who compiled a book a few years ago that attempted to “reconsider the classics.” The book lobbied a long deserved rebuttal against the tired old rock critics that continually cite the same old classic albums that seemed to appear every time an obligatory list of the greatest records of all time was created.

DeRogatis contributed to the festivities by focusing his ire on Sgt. Pepper’s Lonely Hearts Club Band.

Jim, who’s three years older than me, uses Boomer nostalgia as a main focal point of his argument. I could give two shits about how Boomers perceive themselves, their generation, and the albums that they communally namecheck. Whatever they want to deem as their generational soundtrack is up to them. All I know is that on June 1, 1967, the greatest rock and roll band in history released the greatest album ever recorded.

DeRogatis goes on to take a couple of shots at the lyrics (a deficiency that I’ve mentioned), but then goes a step further by suggesting that the underlying theme of Sgt Pepper, essentially, is to “embrace the past” and to “celebrate the values of your parents.” Never mind the fact that most people start to do this even without the help of The Beatles, the key that Jim misses is that the theme is four young men acknowledging the myriad of influences they encountered growing up. The impressive thing is how they attempted to reproduce these references as honestly as they could within the confines of a forty minute long player. 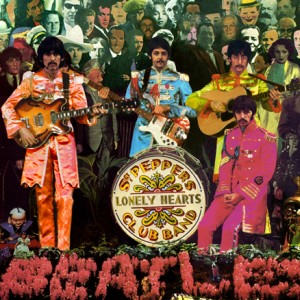 Whether it’s Indian music, whimsical psychedelia, classical music, theatrical pieces, whatever; The Beatles seemed content with coming up with a final product that’s both commercial, challenging, and stunningly original.

The nostalgia argument is even funnier coming from DeRogatis, an admitted Wilco and Flaming Lips fans, two bands that are completely devoted to nostalgia. Seriously: Wayne Coyne owes his entire career to the record collection of his older brother and I’m willing to bet DeRogatis gets a boner for the majority of the titles that the “cutting edge” writers in Kill Your Idols attempt to deflate.

Like I said before, it was Sgt. Pepper that actually provided people with the idea that there was a market for rock and roll criticism to begin with. Looking for a publication solely devoted to rock music before Pepper? Good luck; they didn’t exist. [Crawdaddy! actually debuted in February 1966, but it was pretty obscure… – ed.] But look at the periodical landscape after Sgt. Pepper and you’ll notice a hell of a lot of magazines devoted to the coverage and criticism of rock music. It appears that a lot of people enjoyed talking about how awesome Sgt. Pepper was and decided to continue to do it with other albums and artists.

So how ironic is it that the very format spawned by the Beatles’ eighth album later turned to hungrily cannibalize it. And for what? Essentially because a few record geeks, cooler than you and I, collectively displayed their bitterness that Sgt. Pepper again ranked higher than their beloved Odessey And Oracle?

Because it fucking rules.

It’s easy to forget this, and with each passing year the argument to keep the album in high regard gets even more difficult. We’re seeing new generations without any idea who The Beatles were, let alone their contributions. Yet we continue to hear their influence every time some unsigned band takes advantage of ProTools’ unlimited recording tracks or whenever a band considers a string quartet for their own magnum opus.

There will always be a little piece of that Lonely Hearts Club band, but time, technology and cynicism are doing their part at trying to dismantle the album’s relevance.

But listen to it again, closely, within context, and you’ll hear it’s true: Sgt. Pepper not only taught the band to play, he taught them to consider music beyond their own abilities. And he taught us to listen.

It Was Twenty Years Ago Today (1987 documentary)

Playlist: It Was Twenty Years Ago Today (1987 Documentary)

The Making of Sgt. Pepper (1992 documentary)