Peter Gallagher reprises his role as Sandy Cohen, World’s Best TV Dad, in this heartwarming spinoff from “The OC.” Sandy, Kirsten, and their new daughter are happy as clams in Berkeley, California, where they resettled in their old home after the demise of the Cohen home in Newport. While Sandy is busy as a law professor at the university, he can’t quite keep his nose (or eyebrows) out of other people’s problems, and they don’t want him to. This soulful show with just a schmear of comedy is about one man with the ability to get anyone to do what they probably should’ve always been doing anyway. It’s “Stingray” and “Booker” without horrifying leather jackets, and Road House without the roundhouse kicks. Pain don’t hurt, unless it’s the good kind. Recurring special guest: Mr. Smith, the wise, chatty orangutan from the 1983 series of the same name. 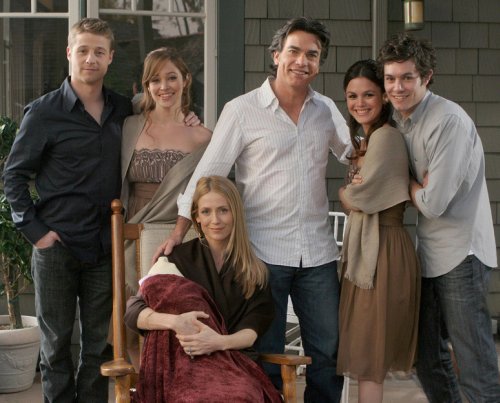 Songs in this episode:

• Clinic – “The New Seeker” from Visitations

Images courtesy of TheOCshow.com. Be sure to look back upon all the great OC coverage over the years. Ah, those were the days, my friend.

6 thoughts on “The Final OC Finale (for real this time)”