So I saw the ad a couple of times last night as I watched the death throes of my beloved Pistons. I thought it was just another clever car commercial that used an outtake from a new album, but apparently it’s much more: VW and Wilco create music and advertising first:

In a new form of music/promotion/communications, the band Wilco’s recently released album Sky Blue Sky is the soundtrack to Volkswagen’s latest TV campaign. This new form of marketing collaboration has the creative forces of Wilco and VW combining to launch both an album and a VW campaign in the same week. The partnership spans multiple commercials and multiple songs, with the first song being “The Thanks I Get.” […] It’s also the first-ever licensing deal for Wilco.

Inevitably, the fans lose their minds arguing about whether or not this constitutes a sellout.

And Tweedy’s own brother-in-law uncovers the real scoop:

“Jeff Tweedy IS a Nazi!! […] I bet marrying my Jewish sister was just a ruse to further his white supremacist agenda. All that liberal twaddle he spouts at his concerts is just a front to hide his nefarious activities and his devotion to Satanic causes.”

Check out the controversial “new promotional photo” Jeff Tweedy “had taken following the debut of the Volkswagen campaign.” 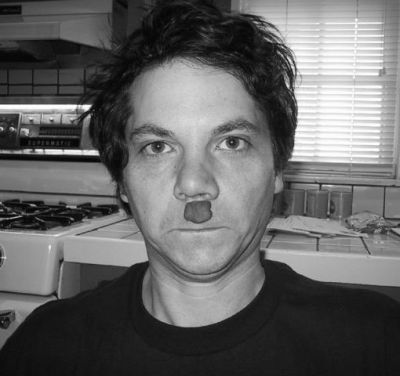 Good to see he’s keeping a sense of humor about this.

You’re supposed to be able to download an mp3 of “The Thanks I Get” from Wilco’s site if you insert your Sky Blue SkyCD. But I couldn’t get it to work. When are those dudes going to realize that Quicktime is a media player, not an application development environment?