Don’t let a passing listen fool you into skipping what is a slight return to the elements that made Wilco great. Sky Blue Sky is a sleeper album; the kind that is fast disappearing in this hyper-saturated digital world.

Contrary to what major labels might tell you, the real danger in unfettered peer-to-peer file sharing is not that it might spell the end of the record industry as we know it, but that with so much music at our finger tips we might not take the time to stop and listen. There may not be any sleeper hits anymore, and that would be a shame.

I’ve been an ardent Wilco fan since I first heard “Passenger Side” on a mixtape in the back of a Winnebago going to see Crosby, Stills and Nash in the mid-90s. I’ve seen Jeff Tweedy solo and with the various incarnations of the band seriously countless times in venues ranging from the piss-drunk intimacy of Lounge Ax to the venerable opulence of the Auditorium Theater. My fandom reached the mega-geek stratosphere when my own band opened for Jeff Tweedy at a sold out Vic Theater performance a couple years ago. It’s with that history that I find myself ashamed that I nearly dismissed Sky Blue Sky when it didn’t grab me on first listen. I am here to atone for my sins.

Jeff Tweedy has a special talent; an uncanny ability to trim off portions of an audience that has followed his work for years while nurturing and growing his overall fan base. Pruning and tending all the way, Tweedy has become the Family Gardner as he claimed on the Minus Five song of the same name. Each successive Wilco album since AM seems to be an attempt to confound the perceptions established by the previous, while almost impossibly supporting the musical landscape it forged. Being There undid the continuation of country-fried goodness that AM brought over from Uncle Tupelo while maintaining the folksy foundation. Summerteeth blew up the Spector-inspired production and sublime lyrical experimentation of Being There. Yankee Hotel Foxtrot expanded the bombastic production and droning feedback of Being There. Then A Ghost is Born assaulted the listener with a 7 and half minute sonic migraine. It was all coming to a head and the next logical conclusion was 45 minutes of unlistenable madness and lyrical gibberish backed by “tasteful drumming” and “contemplative bass lines.”

But then Jeff Tweedy got right.

Recent interviews have Tweedy explaining his distaste of the “tortured artist” cliché and how his sometimes violent wordsmithing led to amateur psychoanalysis from critics and fans alike. It can’t be easy being married to the man who wrote “I dreamed about killing you again last night and it felt alright to me.” Nor can it be easy to actually live out that cliché.

It was with that in mind that Tweedy, fresh from a rehab stint to kick prescription drugs, started to see the sun shining. Sky Blue Sky is a celebration of light. Lilting melodies and airy production bring a freshness to the album that hasn’t been felt in Wilco World for years. From interviews and a quick reading of the lyrics that make up Wilco’s eighth studio record we get the impression of a family emerging from a successful session of group therapy. The greatest danger I see for the future is a leaning too far into 70s puss-rock softness or a total regression into nursery rhymes. Neither of which are found on Sky Blue Sky but the inklings are there.

And to think I almost missed it. The reason why is plain: I am not a fan of Nels Cline’s guitar playing. There’s no denying his talent, but I subscribe to the Johnny Marr school of guitar soloing, believing that the reason some musicians play so many notes is because they can’t find the right ones. Cline’s jazzy runs and blistering twists detract from what is essentially a simple album. Additionally, my interest in jazz-influenced rock and roll ends with The Zombies.

But dismissing this album because I don’t like SOME of the solos is like abandoning a friend because I don’t like his new girlfriend—an offense I’ve also recently committed. Given time, I can now see that all the elements I’ve always loved about this band are still there and still glorious in their execution. I’m glad I took the time to hear them.

Wilco – “Shake It Off” Trailer 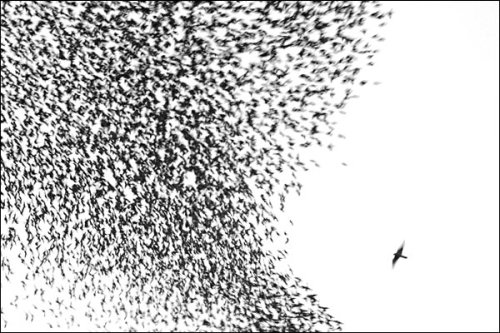 Curious about the cover image? It’s from “Sky Chase,” a photo of a peregrine falcon sweeping into a flock of starlings that won Manuel Presti 2005’s Wildlife Photographer of the Year award.

Previously: Wilco: A Dream Can Mean Anything; Interview with Greg Kot: Learning How to Die; Wilco: Far, Far Away; Just a Fan: the Give and Take of Downloading; Trying: The Wilco Movie. Yeah, we’ve spent a lot of time writing about Wilco over the years. [And those fuckers won’t even send us a promo! – ed.] Check out this early message board conversation about YHF.