Almost twelve years ago, some friends and I were having an e-mail discussion about Neil Young when one of our other friends made some ridiculous comment about how we shouldn’t waste his time on such an awful singer and terrible songwriter like Neil. I spazzed, of course, but my man George’s response was genius. Check it out after the jump…

To: Multiple recipients of (blue-cheese-lounge) 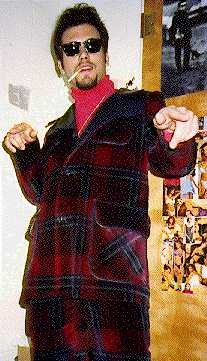 I urge you to take care in what you say concerning The Neil. I mean, what, should everybody sing like Linda Ronstadt, perfect tone, balanced, white-turkey normal and boring as hell? No. I don’t think there is such a thing as a good voice or not. To me what’s important is that Neil has got duende. That’s a flamenco term. Duende in Spanish means dwarf; for the gypsies when you’re talking about a singer, and you say he has duende, that means he’s gone over the edge somehow, that his little demon (or angel) has taken him on a trip, like the ancient mariner. The twisted echo of his voice helps us know something that exists outside the normal universe. This all might sound cheezy. All I know is, I played tons of American music one night in a little village in Andalusia hanging out with a bunch of pig farmers, getting wasted. They wanted to hear some American tunes, good ones, not pop shit. They never had and they were playing flamenco to me and Flynn and wanted to hear what we thought was good music. We played some stuff and nothing went over well until I slipped Tonight’s the Night in. This guy, they said, has duende. And we jammed to it all night.

I think good voice/bad voice is a red herring. Ain’t no such thing. And there’s a hell of a lot more going on in a song than singing. But to each his own. I’ve had plenty of encounters with people who don’t like his singing. That’s fine, no skin off my back. But I do urge you all to be careful in what you say. Some of us worship Neil. We have guns. We have big cars and lots of free time. You’ll never spot us until we pull a powderfinger on your ass.

The Ancient is dying
and the New is yet to be born.
In this interlude, monsters are bred.
—Antonio Gramsci

Muchas gracias to the Internet Archive’s Wayback Machine for keeping a copy of this for all these years!