I arrive to a little punk thug thunder as Jay Reatard (mp3) bashes away while it rains on and off. Caribou (mp3) is up next. In a typical club setting, Daniel Snait‘s Canadian psych-rock explorers pulse with an ethereal precision that doesn’t really work in a festival setting. I’m pleasantly surprised when they shift to a more forceful roar to reach the crowd in this less controlled environment.

It poured early Saturday morning and rain keeps coming down here and there all afternoon. Union Park devolves all weekend long into an increasingly muggy mess, but nobody seems that put off. Some brave kids start indulging in their own Glastonbury mud monster fantasies. Most of us just get sticky and tired, losing the will to run from stage to stage and catch every single act.

And that’s kinda the cool lie of the Pitchfork mentality: the idea that you can be everywhere at once and pay absolute attention to all of indie culture’s smallest corners. Me, I grab a beer and hide out under the trees with the other uncool people to watch the bearded men of Fleet Foxes (mp3) from afar. Their 70s folk harmonies are pretty in an understated, kinda boring way. 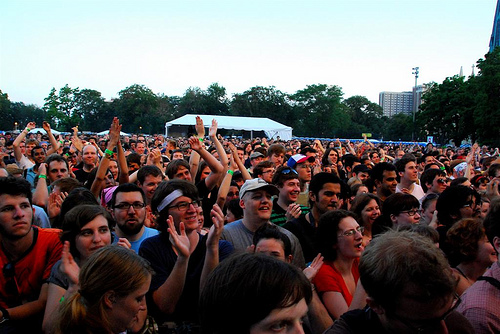 Dizzee Rascal (mp3) isn’t having any of it. His soundcheck on the opposite stage ruins the Foxes down-home, backwoods vibe (a moment repeated throughout the weekend, to the fans’ increasing frustration). When London’s grime ambassador takes the stage to the sound of PE sirens, the first thing he says is, “I saw you listening to that fuckin’ shit. Fuck that shit.” And then he gets into a fight over his monitors before finally delivering a blistering set full of shirtless fury. My ex-hardcore fiend buddy thinks it’s hysterical to see a black British rapper leading white indie kids in an “Oi” chant, but nobody else seems to get the joke.

Vampire Weekend (mp3) takes the stage and immediately I smell clove cigarettes. Their studied and polite collegiate pop is pleasant enough, even when the entire crowd realizes at exactly at the same time we’ve never made it to the end of their record. The drummer is clearly wearing a Phish shirt, either the weekend’s biggest fashion faux pas or the most meta “eff you” to blogger backlash.

Side note: Hippies and hipsters seem to be getting awful friendly. More on this menace later…

Tim from Les Savy Fav (mp3) is handing out haircuts for $2 for the pitchfork.tv cameras. People seem satisfied. 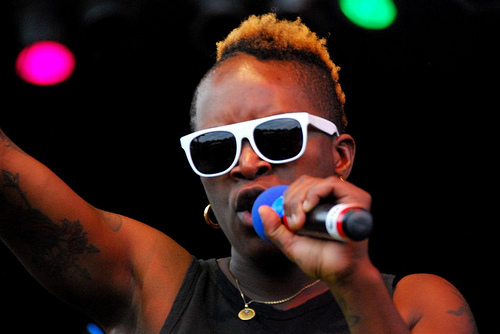 From here our outdoor mixtape seems to suffer from sequencing problems. !!! (mp3) is a big exciting band, but everyone I talk to feels like we’ve seen them play three or four times and it’s like looking through photos from somebody else’s blowout: kinda cool at first, then there’s this slightly grating sameness. I park myself in front of the other stage and wait for my personal party to start. 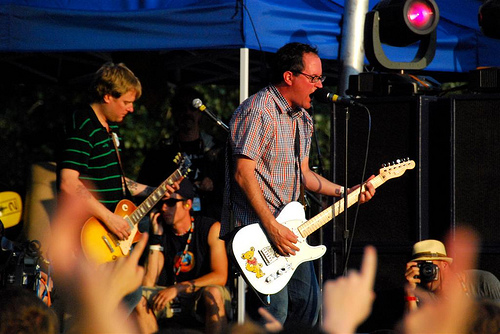 The sun comes out during the Hold Steady‘s (mp3) second song, but I am so happy, I hardily notice. I have no clever notes from this part of the day (My wife told me to man up and double fist beer for their set). I know I was talking to a couple from Cleveland who didn’t know what they were in for before the set. I know my swollen ankle stopped hurting and I didn’t feel sweaty or filthy anymore. There was a lot of the new record, Stay Positive, and of the last one, too much maybe. Still, fists were pumped. Hands were clapped. Summer bliss. They should have closed the night, though I’m the only one who thought so)

I cannot say much about Jarvis Cocker (mp3), except his accent is very hard to understand from inside a port-a-potty. I enjoyed his last solo record, and the songs I knew sounded great. I have no doubt his gleeful anglophile fans lap up the whole thing, but I think the organizers misstepped by sandwiching him between the Hold Steady and Animal Collective (mp3) (No Age was also on at the same time on the small stage). No Pulp songs. Seems cruel. 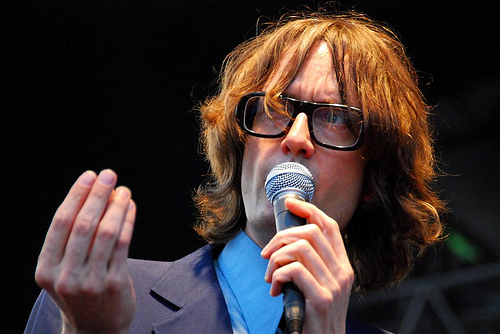 So when you’re a dork and wear your credentials all weekend, people start coming up to you to give their opinions, asked for or not. A tall, skinny kid in the beer line with long blond hair and a 4 year-old’s neon sunglasses confided in me, “No Age is great, but it’s all about Animal C., bro.”

Was it? I like their records, the organic looping weirdness and the yelping glee of a late stage Brian Wilson pushing himself deeper and further. 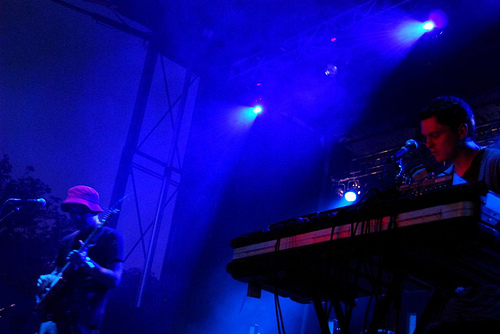 Live, I hear beeping beats, I see pulsing lights and druggy dancing—um ,this is called e-lec-fucking-tronica I am at a goddamn rave and all around me wild longhaired weirdos in facepaint get freaky with each other in the mud.

I go home and shower till morning.

On the muggiest day of the year, smoke machines are just redundant. Painfully so, if fact, for those of us pressed together in the worsening BO funk of the crowd watching Boris (mp3) play on the final day of the P-fork Music Festival.

While they’re surely not the first Japanese avant-metal band to be confused over such matters, Boris seems particularly out of sync with festival protocol. There is a weird lost-in-translation energy from the drummer, who plays in ill-advised white vinyl gloves. There are instrument and amp problems, which cause supposedly one of the loudest bands on the planet to play at normal, palatable levels. They seem deflated, like their poofy metal locks in the humidity.

Boris call it quits early, claiming there isn’t enough power for their gear (Dinosaur Jr.‘s massive Marshall stacks have no problems later in the same spot).

The Apples in Stereo (mp3) are next, but I only stay for three songs. There are three Elephant 6-related acts at the festival and I have skip them all, which I feel horrible about, but the temptations of discovering something more exciting make me move on.

And what I get is HEALTH (mp3), messy and amateurish punks from LA on the small third stage. Their smashed art noise doesn’t irk me as much as the idea that we had to import them in from the coast. To think of all the enthusiastic and untalented dorks we have right here on the West Side of Chicago, starving for an opportunity just like this.

The schedule on this stage is out of whack because of cancellations and delayed flights so I have to wait for King Khan (mp3) to come on. While his band scrambles to set up, the world’s foremost South-Asian-garage-crooner-from-Montréal-but-currently-living-Germany throws an entire case of water into the crowd as appeasement.

Khan played the late night, exclusive after-party Saturday and this afternoon he is a little hoarse, but too crazy to let it slow him down. Wearing only underwear, a cape, a gold beaded wig and sometimes a plastic centurion helmet, he is an unbelievable showman. His seven-man band is augmented by go-go dancer cheerleader and Khan does all of the following during his show:

• Claims the Shrines are “bringing fingerbanging back in 2008”

• Urges us to “Play with your balls, Chicago”

When I was following the Detroit scene, at a certain point, playing garage rock was being treated like a book report. What is really exceptional about Khan is he really doesn’t give a fuck. No pose, like HEALTH trying really hard not to try. King Khan is effortlessly soulful and he was one of my favorite acts of the weekend.

In one of the cruelest scheduling conflicts, Les Savy Fav is playing at the same time on the other side of the park. When I get over there, Tim Harrington is also mostly naked and being passed around in a trash can during “We’ll Make a Lover of You.” This fat, shirtless party animal showdown would have made for quite the backyard-wrestling match. I can’t do this set the justice those who were up close could; there is lots of rock, lots of mud smearing and talk of Indian burial grounds below the softball diamonds. Tim is later spotted selling the individual items in his VIP bag for a $1 each.

I re-hydrate and go shopping at the Flatstock poster fair. May I give a shootout to a couple of favorites who let me browse longer then they needed to? Check out Chicago’s own the Bird Machine and Crosshair Design, as well as NC’s Plastic Flame. 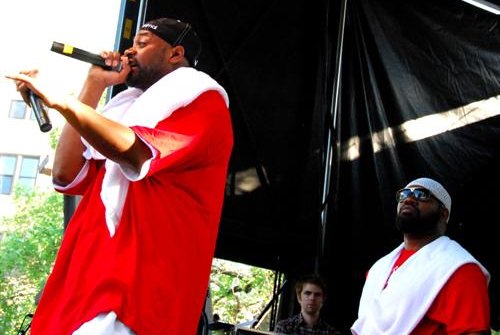 I’m peering from behind a tree for Ghostface Killah‘s set, which seems prudent. A feral-eyed hippie in warrior paint asks, “Did you see Occidental Brothers, man? Occidental Brothers are fucking incredible.” I lie and agree about liking Afro-pop, fearing for my life.

Ghostface and Raekwon have a huge audience waiting at the third stage, but waste no time explaining they just got off a nine-hour flight from Europe. It’s a letdown. They do a set of iTunes samples and the mighty Wu-Tang‘s Ghost can’t give his all. He asks the crowd to sing by ourselves on “Shimmy Shimmy Ya” in tribute to ODB, so Ghost too can rest in peace. I am literally smoked out of my spot halfway through and retire to the main lawn.

I have nothing to say about M. Ward (mp3) except he seems like the whitest thing ever after Ghostface (who wouldn’t?) and he closes with a Daniel Johnson cover. 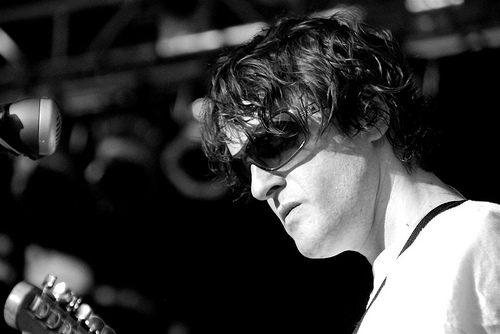 I’ve heard they’ve been completely hit or miss the last few years, but Spiritualized comes on at exactly the perfect time. Beautiful, catching your breath music. Graceful and moving in a breezy way, awesome for a festival winding down.

I notice Lou Barlow watching from the other stage and maybe he takes it to heart. Three or four years after getting back together, Dinosaur Jr. (mp3) feel they have nothing left to prove. There is a strange calmness pulsing through the once famously divided band. Nobody minds the new stuff a bit. They play post-Lou material like “The Wagon” without batting an eye. They aren’t as savagely loud as back in the day or even two years ago, but “Freak Scene,” obliviously appropriate, is killer. I’m so tired, I have to keep reminding myself one of my favorite bands of all time is playing one of my favorite songs.

J. Mascis and I have a little disagreement over the encore choice: He asks what we want to hear. I scream for “Just Like Heaven.” He obviously he hears me and mumbles back something about that not being their song.

Speaking of my favorite bands of all time, Spoon (mp3) is closing up. They are incredible as always, but did I mention I’m tired? And grouchy? Like piss-off-your-wife-for-three-days-for-being-a-jerk-when-she-says-we-should-leave-early tired and grouchy? Sorry, Bets.

I know all the songs anyways, but the lights, the noise, the summer air. For all my bitching, I don’t want to wait another year.

2 thoughts on “Notes from the Pitchfork Music Festival”