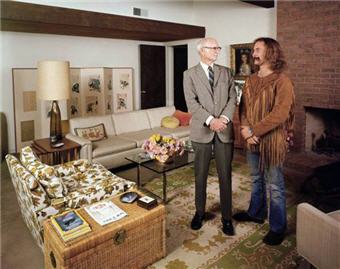 It’s hard to imagine that the douchebags in BrokeNCYDE even have parents, nevermind what those parents’ houses look like. But I imagine the same could have been said about The Byrds‘ former member and CSNYmega-hippy David Crosby (pictured with his father, Floyd) or Frank Zappa. That’s what makes this little gem on Apartment Therapy so cool. It’s a series of photos featuring rock stars from the 70s in their parents’ or grandparents’ homes. What an interesting, intriguing concept.