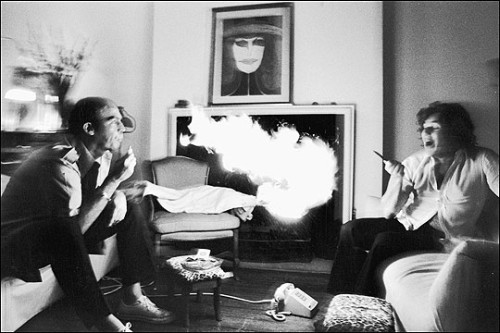 Rolling Stone magazine is switching to a smaller, rack-friendly size. This is certainly not the first time the Stone has changed its format. It started out with a double-folded newspaper style similar many current local alt-weeklies (which is pretty much what it was). So whatever.

Details after the jump…

Here’s what you need to know:

• It “will switch to heavier, glossy paper and sleeker page designs, and it will be glued rather than stapled — “perfect bound” instead of “saddle stitched,” in magazine lingo — giving it a flat spine rather than a tapered edge.”

• It “will spend more and print more, not less: in addition to using more expensive paper and binding, it plans to add 16 to 20 pages per issue.” Woo hoo!

• The standard size will help in “selling insert ads, like those with scent strips or tear-out postcards.” Boo!

• “The magazine had 486 ad pages in the first half of 2008, according to the Publishers Information Bureau, down 33 percent from the same period in 2005.”

The Stone gets a lot of shit for putting dopey pop stars and TV celebs on its covers, but it’s actually run a lot of solid features over the past several years. And Matt Taibbi‘s political coverage is worth the $12 subscription price on its own.