The nearly sold-out crowd ran the gamut of generations, all of which seemed like they’d be cuddling up with a highlighted copy of Infinite Jest if one of their own wasn’t in town that evening.

I’d heard little about Silver Jews live performances…hell, there’s really not that many performances to read about…and the few accounts I’d come across pointed to an idiosyncratic leader who keeps the lyrics on a music stand and gives little in terms of showmanship. He is, if I were to believe the stories, the anti-thesis of a frontman, someone who is in the unfortunate position of having to brave the spotlight because he is in the unfortunate position of being in a rock band.

He’s keeping a running tally of his performances…Iowa City was number 99…and he’s getting better at them if you’re familiar with those aforementioned accounts. No, there are no choreographed moves, crowd interaction or excitement. But there is no music stand anymore, no hint of stage fright and, perhaps most importantly, no evidence of trepidation at having to climb on to a stage to make his talents known.

Part of the reason must be that his better half, Cassie Berman, is right next to him on stage. As both The Joos bassist and vocalist, Cassie provides her husband with a visual to focus on, particularly during the line in “Tennessee” where he goes “You’re the only ten I see.” Beyond these moments of sweetness, he watched her with love and admiration frequently during the set, particularly when she handles lead. It’s obvious that her presence gives Dave the strength to tackle this relatively new arena: a live setting.

The other benefit that Berman gets is from his backing band, a tightly wound unit of enviable proportions. Too bad nobody seems to notice that, while Dave’s holding everyone’s attention with his words, these guys (and lady) are delivering some awesome alt-country arrangements.

The set was plagued with far-too-long moments of monitor feedback and other technical gremlins. Berman finally addressed the issue in between songs by taking his microphone and interviewing band members about what they thought about the monitor mix. After some polite dismissal of its quality, the troubles suddenly disappear (could this have been Dave’s passive-aggressive way of lecturing to the sound-woman to get her shit together?) and the rest of the night went off without a hitch. 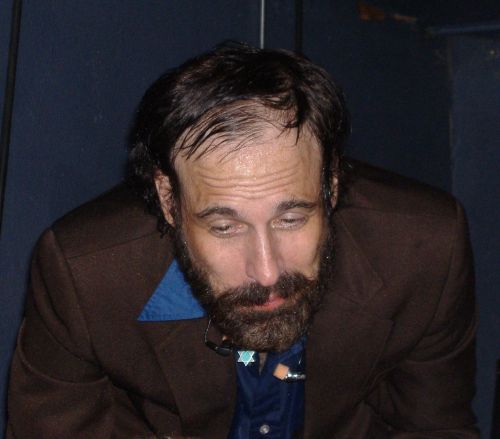 I haven’t been very thrilled with the last two Silver Jews albums, but the live arrangements absolutely stand above the studio versions. The instruments featured a lot more bite and Berman’s monotonous delivery gave everything some additional depth. The resonance to his voice was front and center throughout the mix, and since most of the crowd counted themselves as fans of his lyrics, they were entranced with every uttered syllable.

His between song banter also pointed out the obvious: as smart as Berman is, he’s still one strange cat. He advised everyone to put the date of “11-7” with the same reverence as “9-11.” He never clarified the significance of that date, and I could only guess that it was in reference to George W. Bush’s presidential “victory” on November 7, 2000.

Berman likened his microphone, a standard issue model with a strangely flamboyant yellow windscreen, to that of Match Game host Gene Rayburn. During a raucous version of “Punks In The Beerlight” towards the end of the set, Dave ripped the windscreen of the microphone with his mouth, chewed on it briefly, and then spit it to the ground.

He’d wander behind the equipment during instrumental breaks, give out dedications at the beginning of songs to random individuals, and frequently begin to tell stories only to lose tracks of his thoughts just at the moment the song began. He wasn’t drunk and I think a lot of it was geared as some strange sort of routine. Since it was hard to understand through Dave’s continual mumbles and see his eyes through his large glasses, it was hard to gauge his intentions.

Theatrics aside, the crowd ate it up and responded with abundant amounts of enthusiasm. The closer they knew the show was getting towards the end of the set, the more vocal they became. Almost instinctively, the band began playing with a lot more ferocity and precision and Berman found himself with the unique predicament of how to make an appropriately awesome exit. Twice, the band tried to leave and on the second attempt, Berman called them back out within seconds of going through the rear stage door. The musicians dutifully returned to their post and performed a couple more numbers.

Finally, even Dave himself knew that if he didn’t pull the plug, the club would. The crowd would not let up until Dave promised them that he would return, someday, for another show for his Iowa admirers.