In an interview with the BBC Ian Brown claims that his former Stone Roses bandmate John Squire sent him a new song to consider recording for his new solo album:

Brown admitted he actually liked the track, but his son advised him not to use it: “Kid said, ‘Look dad, was he looking out for you back then? Are you sure you wanna do that?'”Brown might not be the biggest fan of Squire, after their rift, but he admitted the guitarist and songwriter still has talent.“I could have fitted on the first three minutes of the tune, it was pretty good,” he said. “He definitely did it with me in mind because it had electronic, hip-hop drums on it and I thought, ‘Whoever’s done that must have heard me solo stuff’. He’s still got it, it’s good.”

This sounds fishy to me. Squire has made it abundantly clear lately that he’s focused on his art now, and has “no desire whatsoever to desecrate the grave of seminal Manchester pop group the Stone Roses.” But who knows? All we know for sure is that there’s no way in hell that Ian Brown’s latest solo album is going to come anywhere close to being in the same league as the work he and Squire made together. Oh, and Ian Brown’s kid needs to learn to shut the fuck up. 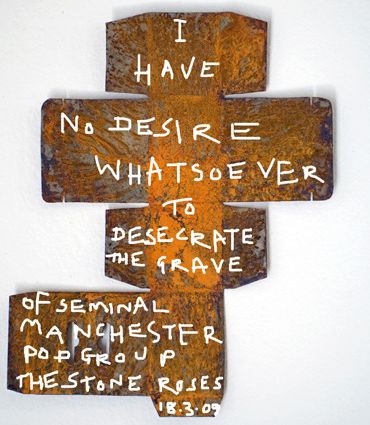