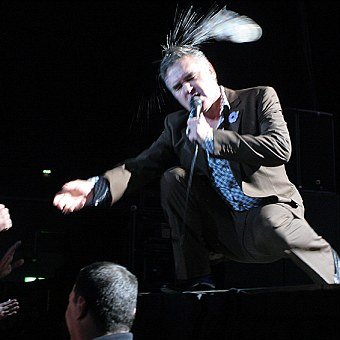 Bonk! Guess what folks: if somebody throws a bottle at Morrissey during a show, he’s not going to take it well.

But during his second song, Black Cloud, he stepped forwards to the front of the stage to shake the hands of fans when a plastic bottle of beer was hurled at him. The singer stood up and said ‘goodnight’ to the stunned 8,000-strong crowd before walking off stage.

One dipshit in Liverpool ruined it for everybody. You don’t fuck with the Mozfather.

Video: Morrissey Storms Off Stage In Rage After Bottle Is Thrown At Him

2 thoughts on “Morrissey Bopped on the Bean”