But let’s set aside all the secondary reasons why Rothbury was so much fun — the camping, the friends, the people, the mind-altering substances, the venue, etc. — and give credit where it’s due, to the artists. Whatever you thought about the lineup, as heavy on jam bands as it was, the actual performances at this festival were across-the-board excellent. Most of the time, the bands were at least as enthusiastic than the fans, and with one notable exception, I did not see any of the artists just going through the motions — they were playing to the crowds. The point I’m trying to make here is that even you indie rock snobs who hate hippies and their music would have had a good time. Rothbury is about the jam band scene, but even more it’s about good music. It was the nature of the beast that there were no corporate drones or trust fund kids hogging all the good seats, ruining the vibe for the real fans at Rothbury. We were all real fans, and it was pretty clear that the artists appreciated that fact. 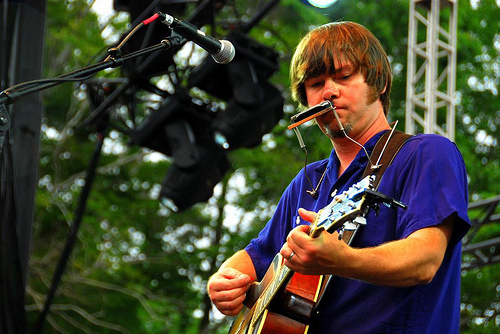 I didn’t get there until Saturday morning, so for thoughts on Thursday or Friday’s music you’ll have to look elsewhere [like here -ed.]. And since the stages overlapped time slots and it was entirely necessary to schedule in some downtime, I’m sure I missed lots of good music even while I was there. But here’s the rundown on what I did manage to catch.

After missing Ralph Stanley & The Clinch Mountain Boys due to misunderstimating the distance between our camp site and the venue itself, Son Volt was the first act I caught. Let me preface what follows by saying that I like Son Volt/Jay Farrar and own all the band’s albums. But they really sucked at Rothbury. I saw them back with the original lineup and was disappointed in Jay Farrar’s lack of showmanship. He did nothing to change my opinion at this gig, despite having a completely different band with him this time around, a decade later. The guy just can’t figure out how to perform to a crowd, which seems odd to me given how excellent something like the live Coffee Creek bootlegs are. Anyway, let’s not dwell on this uninspired set, as a short time later we got perhaps the best performance of the festival. 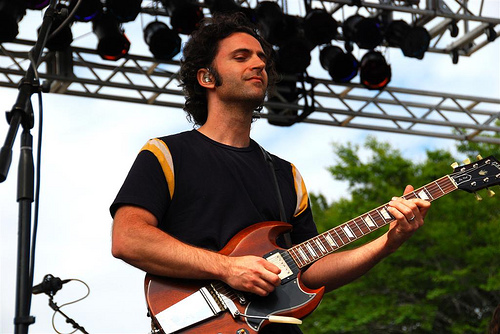 It came from Zappa Plays Zappa, featuring Frank’s son Dweezil. These guys basically play Franks Zappa‘s music and Dweezil shows off what an amazing guitar player he is, and he is completely mindblowing. I saw these guys here in Ann Arbor last fall and was impressed, but their set at Rothbury was out of this world. I was right in front, so the sound was remarkable, and the new lead singer, Ben Thomas, was impressive. Rothbury was heavy on jamming and extended guitar solos, but I don’t think any of the self-proclaimed jam bands do this type of stuff as well as Zappa and company.

After Zappa I took a short break to go back to the campsite and get ready for the Dead. I’m glad I did, as the four-plus hours of their show taxed my limits. Our crew was not particularly well prepared for this first day, which is why I only managed to see exactly three bands out of something like 20 that performed. (Rothbury Survival Guide to come.) We’d do better the following day, but not until after we enjoyed the whole reason we came to this nutty gathering.

The Dead did not disappoint. After a solid spring tour in which the band had some fun with their set lists, it was pretty clear that they tried to step up to the plate and hit a home run for the fans. Those of us who didn’t hear some of the tunes we were hoping for when the band was in our neck of the woods were ecstatic almost from the get-go, with classic ’70s songs like “Eyes of the World” and “Estimated Prophet” right from the beginning. When the long first set ended with “Help Is On The Way” into “Slipknot” into “Franklin’s Tower,” I think a lot of us would have been happy going home right then and there. But there was more. After a long, long wait, in which we were left to puzzle how nobody in the band had noticed that Phil Lesh cannot sing (at all), the Dead came back and we got even higher off “Shakedown Street” and the classic “China Cat Sunflower” into “I Know You Rider.” That was the peak, as the band never hit quite the same vibe after “Drums/Space,” despite a nice “Morning Dew”. I took off during the fireworks-laden encore, cold, wasted, and more than ready to crawl into my sleeping bag. Instead I spent over an hour wandering lost through the camping area/parking lot.

Sunday saw our motley gang successfully manage to wake up, get coffee from one of the unofficial vendors, and make it into the venue in time to see the Hard Lessons at 1:00 pm, what seemed at the time like a Herculean feat despite reading today as kind of pathetic. After the Hard Lessons, who rocked, I am told that we briefly checked out Toots and the Maytals, though my own memory of this is missing. I do clearly remember hunkering down in the woods to listen to the Sam Roberts band, which was very good, but due to the intense heat and sun and other factors beyond my control, I didn’t actually see much of them. 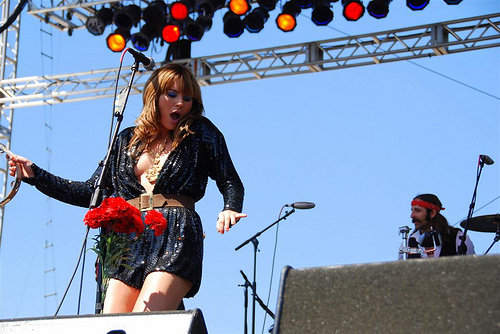 Grace Potter and the Nocturals followed, and I implore you to check out this act if you’re even a little bit into the seventies rock sound. Besides doing some great originals, Potter covers all kinds of cool songs, like Neil Young‘s “Like a Hurricane” and Aerosmith‘s “Sweet Emotion.” At Rothbury she dished out some “White Rabbit” and showed that this Grace can belt it out just like her Starship namesake.

That brought us to the Hold Steady, who threw down the gauntlet to the jam band crowd. Clearly persecuted, openly defiant and antagonistic, these guys were there to make a rock and roll statement. No guitar solos here, no wankering around on the fretboard, just raw East Coast rock. At that time I just happened to need a good dose of what they were selling, and the early-Springsteen-style sound was even more pronounced live than on their albums. The crowd for this show was small, which is a shame, but this was the antithesis of Son Volt’s lame brooding from the day before.

Next I caught about half of Willie Nelson‘s set, which was as well-attended as The Hold Steady wasn’t. He still sounds great and can play some mean guitar but Willie was predictable, which isn’t surprising given his advanced age. He pretty much stuck to playing short versions of all his hits, and his volume level was noticeably lower than most of the other bands, which made for a nice relaxing break.

When the sun got too bright, I caught the first half of Gov’t Mule‘s set. Warren Haynes is clearly the hardest working man at the festival, having played for over three hours the night before with the Dead. If you are not a fan of his, you are clearly not in the target audience for Rothbury, as Gov’t Mule is one of the few repeat performers from last year’s event. Fan or not, you’ve got to respect Haynes’ guitar playing. I’ve got plenty of thoughts about Gov’t Mule and its significance to the modern rock scene, but I’ll limit my commentary here to observing I really dig this band as something of an uber-group that’s capable of playing good classic rock better that anyone has any right to do in this day and age. Certainly a band like Gov’t Mule is far more entertaining and authentic than most reunion tours from arena rock groups from the early ’80s. These guys bring an effortlessness to bluesy rock that’s probably unmatched. At one point in time, they broke into Stevie Wonder’s “Higher Ground” and it was such a smooth segue that you had to think twice to even realize what they’d done. 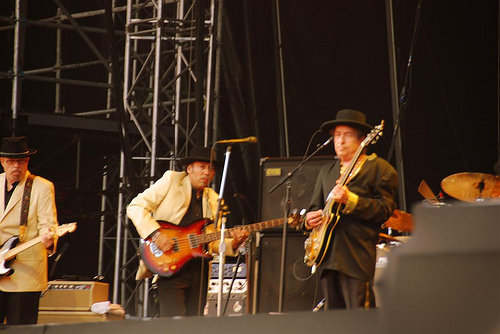 I took a breather between Gov’t Mule and Sunday night’s headliner, Bob Dylan. If I missed the first few songs of his set, I’m not too upset about it today. I’d love to chalk up my apathy to the excesses of the weekend, but I don’t think that’s it. (I stuck around for half an hour of Umphrey’s McGee immediately afterwards, a band I had absolutely no knowledge of or interest in, but totally enjoyed.) Honestly, I didn’t find Dylan that much more interesting than I did when I saw him in 1990, and I am sticking to my 19-year-old story: Hearing him do weird versions of his classic songs just does not appeal to me. I did hear some decent moments in the material on Sunday night, particularly him belting out “Like A Rolling Stone” while hordes of half-naked teenagers hippie-danced around me. And let’s face facts: Nobody would have been there Sunday night had it not been for what Dylan did in the ’60s. 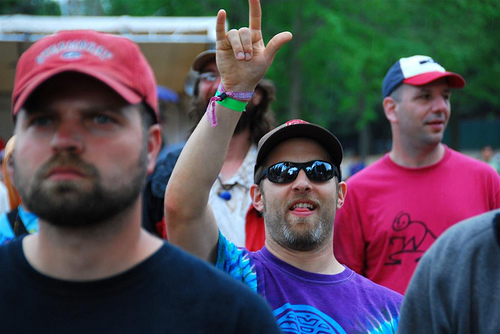