Saxon – Into The Labyrinth (Steamhammer/SPV)

As one of the prominent players in the New Wave of British Heavy Metal, Saxon‘s thirty-year career has been marred by missteps, misguidance, and general malfeasance by whoever is claiming to lead them.

The band gained deserved attention with a handful of very good releases early on in their career, ending with the excellent Denim and Leather. Their track record was built on hard anthems that typically dealt with things like motorcycles, playing in a rock band, and the occasional song about a train. The band was not very easy on the eyes, their lead vocalist had a limited range, and their musicianship would not qualify as anything spectacular. But the fact that they began to make some inroads with increasing sales was admirable, and their everyman persona could serve as an inspiration to likeminded acts that had similar discouragements.

Saxon then initiated slow process of career suicide so extensive that it’s amazing that we’re still talking about them, let alone reviewing their eighteenth album. Someone advised them after Denim and Leather that the band had a legitimate shot at mainstream acceptance and the band catered to this direction by lightening their sound and sweetening up their production values. The highlight of this era was a track, wonderfully titled “Party ‘Til You Puke” from the awful Rock The Nations, a song that featured the ivory tinkling of one Elton John.

If the band made a decent album during the ’90s, I wouldn’t know about it. Apparently, not many other people did either and the band enlisted the help of Harvey Goldsmith to jumpstart their career a few years ago. Thanks to a reality show Get Your Act Together (think English version of our own Supergroup), Goldsmith actually managed to get Saxon their first chart hit in years, again, at the expense of some long-time fans who viewed the single “If I Was You” as another blantant attempt at commercial appeal.

The band quickly distanced themselves with a return to form, one that continues on Into The Labryinth. And by “return to form” I mean a return to the band’s more aggressive side and certainly not on the same level as their early 80s landmarks. It’s a tolerable effort but it also seems to suggest that the band doesn’t give a shit if they’re pigeonholed as aging relics, gingerly riding their logo into the metal sunset.

Yes, it all seems credibly performed, but how hard is it to recognize the elements that new fans are drawn to and old fans crave? A band like Saxon has had twenty plus years to move in various directions and they’ve failed at every juncture. Blame the record companies, blame lead vocalist Biff Byford, hell, blame the endless parade of Saxon members that have fallen by the wayside over the past thirty years. But don’t blame the fans who will rightfully put aside Into The Labyrinth and reach for one of those aforementioned Saxon albums that gave them a thirty-year opportunity.

Instead, Saxon incorporates overdubbed choruses, pointless keyboards throughout extended intros and “interludes” like it’s 1990 and they’re some kind of fucking metal royalty. Here’s the thing—and it’s advice that you don’t need to put Harvey Goldsmith on the payroll to get—Saxon was a band forged from dirty fingernails and lower class desires. It’s nice to be able to sound like you’ve progressed to something important over the course of thirty odd years, but the fact remains that all we want is for you to come up with some killer riffs and write songs about being in a band, fast motorcycles, and maybe a few tunes about trains. 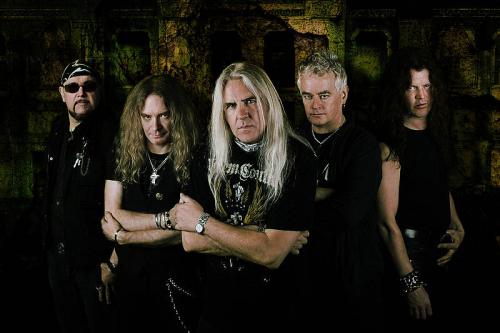 6 thoughts on “Saxon – Into The Labyrinth”