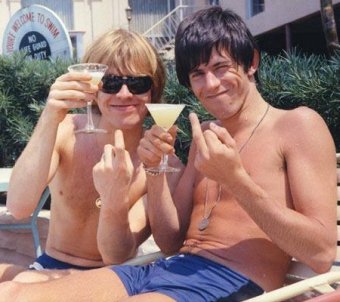 The Telegraph has a slideshow from a new exhibition of “never before seen private snaps” from the early American tours of the Beatles and the Rolling Stones in 1964 through 1966.

The collection of more than 50 pictures, which are being revealed to the public for the first time are part of 3,500 taken by Bob Bonis, the US tour manager who helped organise the so-called British invasion of America in the Swinging Sixties. […]

The pictures were never meant for the public eye and Bonis, who died in 1991, kept the negatives and slides private until his son decided to show the world.

It’s unusual to find something new and surprising when talking about the Beatles and the Stones, but some of these photos are pretty great. Dig Mick Jagger in swimming trunks and Brian Jones sporting an enormous driftwood schlong.