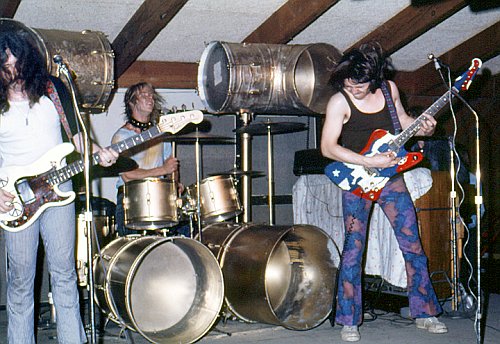 12. The bass player might actually be Lester Bangs. Or my dad. Wait a minute. Is Lester Bangs my dad?

13. There’s black mold growing on the inside of those kick drums up front.

14. Or did they just not have enough gold spray paint to reach the back of those drums?

17. The drums aren’t miked at all? You know why? They’re playing upstairs in a tiny room.

19. I am pretty sure those pants are in Joshua’s basement (inside joke, I know, but I think they are).

21. Curly guitar chord dangling from Seeg’s guitar. What happened to those?

22. Seeg’s face is distorted in a way that people surely thought it would remain that way forever.

23. Even the hardware on that kit looks to be painted gold–must have been a bitch to break down after shows.

24. Strange kick drum contraption doubles as heating ducts, giving us a peak into the drums future as a HVAC tech.

25. Looks to be a Fender Rhodes 77 “Suitcase” piano on that sheet. I can tell you from experience that those things are anything but “portable.”

26. Dog collar on the drummer mixes so so many genres. Is that punk? Metal? Bondage? Or just functional?

27. Peace symbols on the bass guitar pay homage to the end of flower power and the dawn of Motor City stink!

28. Bass player (who also looks scarily like my dad) is clearly tripping balls.

29. Mic stands bent by Bob himself from rods of cold-forged steel with rock and brawn.

30. Clearly they’re in a room smaller and more cottage-like than Harvey’s, but they’re rocking the shit out of it like it’s motherfucking Cobo Hall.

31. Turns out the photo is from Mount Holly Ski Lodge just north of Pontiac, Michigan, 1970.

34. Here’s another one of Pat’s shots from the same show.

35. This band is 2,026 times better than any band currently playing the Ski Lodge circuit and regaling you with Pearl Jam and Dave Matthews Band covers.

36. Now imagine Seeg hitting the slopes after his set in those pants.

38. Seeg changed out of his moon boots and into those filthy fucking shoes (see #18) for this set.

39. If you didn’t tell me, I would have NO FUCKING CLUE that is Bob Seger, and I love his music!

40. Seriously, those pants are the shit. Flare leg AND floods? Awesome.

41. Who knew that Bob Seger invented the “white man’s overbite” whilst jamming out, long before it was used to describe a horrible dance move?

42. Because Pep Perrine could play heavy music on 55-gallon drums.

43. Because Bob Seger was still playing music back then that wouldn’t be appropriate for EZ-listenin’ stations, as is obvious from this photo.

44. Because it is evident that this is what rock and roll once really looked like.

45. Because it says “Detroit”–down and gritty–in a way that is like a rivet to the forehead.

46. Because at some point they’re protesting the war in Vietnam.

47. Because this was probably taken before back in ’72, when the band was still smoking OPs.

49. The ceiling is carpeted.

51. Do I see actual drool coming out of bass player’s mouth?

52. Holly is home to the Michigan Renaissance Festival.

53. Seger appears to be suffering from Vitamin D deficiency.

54. Clearly high when painted his guitar.

55. Anyone who had to lug that drum set upstairs is seriously passionate or crazy – or both.

56. You can play ‘Who’s doing what drugs?’ with this photo all day.

57. My guess: bass player is mostly drunk but also did some hash.

58. Drummer is on some kind of narcotic and a few shots of tequila, but nothing too heavy–maybe a little codeine.

59. Seger is tripping on speed–I know for a fact the man likes his stimulants.

61. Because they were serving pitchers of Stroh’s.

62. Because Seger made the guitar moan to excess during the opening of “Tales of Lucy Blue.”

63. Because SRC probably opened the show.

64. Because the Amboy Dukes probably followed.

65. Because the Rationals probably closed the show.

66. Because members of Frost wished that they’d been on the bill.

67. Because Marshall Crenshaw came up from Royal Oak and thought about his future.

68. Because Glenn Frey also came up from Royal Oak and thought about a limited period of legitimacy

69. Because Mark Farner came down from Flint and saw how a guitar could be played.

70. Because Vince Furnier drove up from Allen Park (near to Lincoln Park–imagine) and wondered how makeup would add to the performance.

71. Because I smell weed just looking at that photo.

72. Again, the pants. Yes, they are so awesome that they deserve another mention.

73. They had to ask to leave work early at Radio Shack to make the gig in time. Their manager was seen puking in a trash can in the parking lot later.

74. At least one member walked off stage and put on a snowmobile suit to load up the Econoline.

75. The cumulative smells of sweat, weed, and beer that gathered in that carpeted ceiling left more than one audience member unconscious during the set.

76. Seger had not yet written “Old Time Rock and Roll.”

78. Glorious Noise contacted the photographer, Pat Appleson, and he shared some awesome stories with us.

79. “The reason we wound up at Mt. Holly, just a little south of Flint on Dixie Highway and just North of Clarkston, Michigan was the fact that the owner of the ski lodge had no operation in the summer.”

80. “They had a couple of rooms, like a big loft, this was where the bands played. It was like a second floor and at one end was a monster window with a view of the ski lift. Think of a big ole ski lodge.”

81. “Everything was done in Bavarian style architecture. Just about all knotty pine rough hewn planks. You expected to see Curt Jurgens walking in looking for his U Boat followed by Chevy Chase in lederhosen.”

82. “It looks like they were playing with their heads touching the roof, which is almost true. Because it was the second floor, the ceiling was a little low and the “stage” was just a riser about a foot tall. It was not very deep, so you didn’t have much room.”

83. “But what you did have, was a intimacy with the audience. They could reach out an grab you.”

84. “So my buddy and Flint Radio personality, Johnny Irons, (Put your Irons in the Fire) made, I believe, the first deal with the owner to do “Hops” over the summer. That’s how we referred to the event.”

85. “To us it was just another record hop with a live band. Mr. Irons and I were partners in many hops in the SE Michigan area.”

86. “Earlier in our careers, I recall Johnny & I hiring who we thought was going to be Doug Brown & the Omens from the 300 Bowl in Pontiac. It turned out that, as I recall, and my memory is fuzzy on this, that they were double booked and sent their guitar player & his band to play for us at a local church basement. We paid him $75.00.”

87. “He said his name was Bob Seger. He played 5 forty five minute sets and sounded great.”

88. “Back to that night, the night of the photo. I carried a new Nikon F2 around quite a bit. Not as much as today. You know, struggling young Jock, trying to make the monthly nut on my 1969 Olds 98 Convert. So, you’d go thru film and processing and it would start to add up.”

89. “Today, with digital, it’s usual and customary for me to shoot 650 or more frames and not even get serious. Back then, you were hot stuff if you blew thru 36 shots.”

91. “Remember, this was a winter time joint, so they had no Air Conditioning. We got a cut of the soda sales, no beer and wine, this was aimed at the 18 to 21 year olds. In Michigan at the time, you had to be 21 before they’d serve you booze.”

93. “Anyway, if the bands Johnny would hire weren’t turning on the crowd, he wouldn’t make as much in soda sales. Or as the locals say, Pop Sales. When that would happen, someone would turn on the winter heaters, take it up to 100 or so. Then everyone would order more soda.”

94. “There were a few notable exceptions, starting with Bob Seger.”

96. “One night, Johnny had hired either the Parliaments or the Funkadelic. Johnny Irons and his wife of many years, Sandie Irons have both passed away. So that makes me the only one left that wasn’t stoned and I hope I’m recalling this correctly.”

97. “So the Parliaments show up wearing Beatles wigs and gray trench coats. The house lights go down and at the appropriate moment take off their wigs, exposing their bald heads. Crowd applauds and yells.”

98. “Then they turn off the lights and hit the Black Lights. It’s still pitch dark until the guys remove their trench coats. Exposing just iridescent blue jock straps, set off by the black lights. The crowd goes nuts.”

100. “But the Oakland County Sheriffs deputies we hired to keep order didn’t know what to do. I don’t think they got arrested, but it sure was funny the next day.”

101. Until a photo of P-Funk in glowing jock straps emerges, Pat Appelson’s photo of the Bob Seger System shall remain the greatest rock and roll photo in the world.

Special thanks to the following contributors to the Glorious Noise Boards for helping us get all the way to 101: D. Phillips, Sugarcubes Forever, Joshua, Anita E, Stephen Macaulay, sab, tuninginout, Mixmaster Shecky, steve-o, and dam05.

More of Pat Appleson’s photos can be seen on his site and in the book: Grit, Noise, and Revolution: The Birth of Detroit Rock ‘n’ Roll by David A. Carson, University of Michigan Press.