I arrived in Aberdeen by way of a 13 hour bus ride from London. Since I’d never been to the UK I had no idea how it scaled to the United States. Was the entire island country the size of California or Mackinac Island? Back then the buses had hostesses who would offer sandwiches for sale and announce the next stop. My hostess had the thickest Scottish brogue you’ve ever heard outside of a Monty Python skit and I couldn’t understand a word she said. At each stop along the way I asked her if we were in Aberdeen to which she’d reply with some Scottish gibberish and increased aggravation. A fellow traveler finally informed me that she was telling me that Aberdeen was the last stop so I could stop pestering her.

The focus of the fight was a Chicago White Sox hat I’d lugged across the Atlantic along with a massive duffle bag of Christmas gifts Jake’s mom sent along with me. Being a broke college student hell bent on spending any money I had on British beer and chip shops, I could only muster $9.00 toward a gift for the Old Man. My selection was an album that had come out just a month before and was recommended by a mutual friend back home who foresaw a musical and cultural shift coming. The album that ushered it in was Nirvana‘s Nevermind.

Jake and I swapped the tape back and forth, among the various mix tapes I’d compiled from Jake’s CD collection I was watching over as he studied abroad. I won’t try to romanticize the influence of that album on our worldview but I will say that it served as the soundtrack for a trip that was extremely important in my young life and one that would have repercussions through the years. It was on that trip that Jake told me he’d been thinking about a certain gal back home whom he’d marry a few years later.

True to our characters as clueless nobs, we’d done little to no planning of our weeks backpacking from Scotland to England to Ireland and back. New Years Eve was coming up fast and we had no idea what we were going to do. We were 20 year old dopes free to roam the UK and we hadn’t a clue what to do. For some reason, we went to Manchester.

If you haven’t been to Manchester, England you should know that there’s nothing wrong with it, but there’s also nothing all that special about it. It’s an industrial town that happens to have given birth to some great English bands. If you’re not hanging out with those bands, then Manchester shouldn’t be high on your list of tour stops. But we didn’t know that. I’m not sure if we thought we’d go there and stumble into Ian Brown or Johnny Marr or what, but there we went. 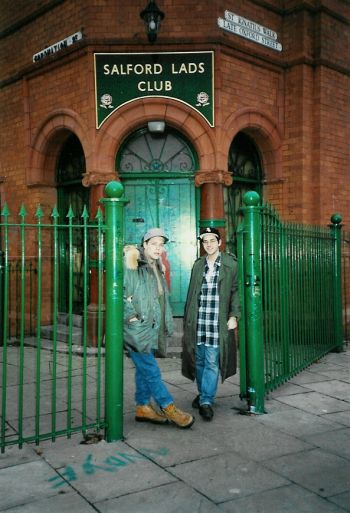 We arrived in town without a clue where the cool clubs even were. The first night was spent wandering empty streets and marveling at the sight of so many broken umbrellas and discarded chicken bones. There may have been a street fair that was disrupted by high winds or this may just be how Manchester looks. I don’t know. We got so bored and desperate that we decided to test Jake’s mother’s faith by asking God to send us two pretty girls—if He really existed. In the nearest thing to divine intervention I have ever witnessed, two plaid-skirted girls walked past us. This was at 3:00 am. The four of us were the only souls on the streets and we were too dumbfounded and awestruck to even approach them. God’s existence and man’s inability to capitalize on His blessings confirmed.

The next day was New Year’s Eve. We wandered the city and somehow found two landmarks that were among the must-see sights: The Salford Lads Club made famous by The Smiths; and the Hacienda, home to every Manchester band of note from New Order to The Stone Roses. Strolling past the latter gave us an idea.

The Hacienda’s New Years Eve party had been sold out for months. This was near the peak of the club’s significance in Brit Pop culture and we were calling for tickets the day of. But what if we could convince someone there that we were important VIPs? Isn’t that the bread and butter of Clubdom? They’d surely make room for us. Bolstered by over-sized egos and confidence in our American can-do spirit, we hatched a plan. We knew enough to try to be subtle about our approach. We wouldn’t claim to be celebrities, or even associated with megastars. No, our story had to be believable.

We thought of the angles. To cover the possibility that we’d be asked for ID, we decided I would be the half-brother of our celebrity. We wanted a connection to someone who was known, but not the focus of everyone’s attention. Given our decidedly scummy look from weeks of hitchhiking and train hopping, we didn’t want to claim massive wealth—or at least we needed to position our appearance as a style decision. I knew who fit the bill but I didn’t know his name. Jake reached into his backpack.

I know it seems funny to think that we didn’t know his name, but we really didn’t. We unfolded the cassette’s inner sleeve and scanned the liner notes. The high saturation photos of three dirty dudes looked back at us. They looked a bit like us. He looked a bit more like me. I was about the same height and had that same dirty blond hair. His looked better. We found his name: Kurt Cobain.

The story was that my step-brother, Kurt, was supposed to have had his label arrange for us to have tickets to the Hacienda party and we wanted to know where to collect them. We found the ticket office number in a phone book and dialed.

The receptionist was nice enough but had no idea what we were talking about. I affected an appropriate level of snottiness, approximated by my review of the “Smells Like Teen Spirit” video and what I thought grunge represented. It worked. She soon gave us the home phone number for “Paul,” who would presumably take care of it all. This may have been Paul Cons, who was one of the men responsible for the day-to-day management of The Hacienda. I don’t know, we never got his last name. But we had his home phone number, which, by the sound of the receptionist’s nervous voice, was a big deal. 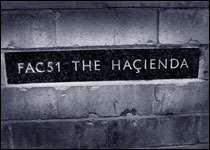 I am not a hustler or a con-man. I talk a lot of shit but when the chips go down, I am a nice Midwestern boy with manners and a sense of right and wrong. We paused before dialing Paul’s number. What would happen if we pulled this thing off? We dialed Paul’s number.

Whoever Paul was, he didn’t want to be bothered in the middle of the day on New Years Eve, the biggest night of a club’s year. He answered the phone quickly and curtly.

“Derek Phillips. My brother said that we’d have tickets for the party tonight.”

“Who are you? How did you get my number?”

“My brother is in the band Nirvana. He said his label would take care of tickets and we’re not on the list. We were told to call you.”

“I don’t know what you’re talking about. Don’t call me again.”

That was it. The door was closed and not even Kurt Cobain could open it. We walked around Manchester a little longer and found another large club that was having a party. We waited in line briefly and giggled as the doormen with pitbulls threw around American street terms with their English accents. Somehow, “Wassup, G?” sounds a lot less “street” when you sound like Hugh Grant.

We decided to bail on Manchester. If we couldn’t get into The Hacienda, then why stick around? We caught an afternoon train to London and made our way to Trafalgar Square, where at the stroke of midnight some pretty blond English girl kissed me square on the lips. We ended up at a house party for a short time and then took an insane cab ride to a Youth Hostel. Happy New Year, 1992.

There are a lot of stories from that trip. Some of them I tell, some I don’t. I haven’t shared this story with many people because in light of the icon Kurt Cobain became it just seems preposterous. But for a moment at the end of 1991 Kurt Cobain was just a guy in a really good band from Seattle…and I might have been his half-brother. 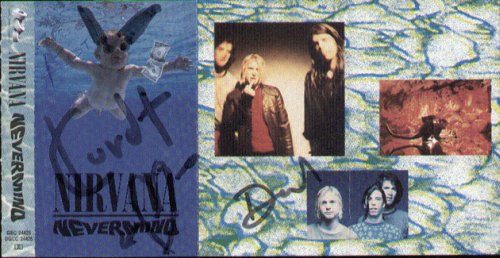 9 thoughts on “Come As You Are…To the Hacienda”