It was 1987 and if you weren’t there you don’t know how bad it was. I need only open a yearbook to remember the clothes, the hair, and worst of all…the popular music. Sure, there was some great alternative and post-punk going on and it was the dawn of hip hop as a cultural movement, but I am telling you it was bad. And nothing epitomized the deep fried confluence of mid-80s radio friendly hip hop and corporate training music like a flexi I was given as part of my training to work at a fast food restaurant.

Like a frog in slow boiling water, we didn’t know how bad it was until it was too late, and in 1987 I was a dopey high school student who needed to pay for my first car and so landed a job at the local Kentucky Fried Chicken. Back then even the lowly fry cooks had to trudge their way out to a corporate training center where we learned the dangers of not keeping our Henny Penny fryers at precise cooking temperatures, but more importantly we learned how to make and sell the latest budget menu item that was sure to knock new comers Hot n’ Now and their .39 burgers all the way back to Holt, Michigan where they belonged. I don’t remember much of that two-day training, but there’s one memory I could never erase:

The flexi they sent us home with became a mix tape staple for me then as it was so ludicrous I had to share it with others, lest they not believe my description of an instructional song done in minstrel-rap style. There’s the awful synthesizer, the deep but non-intimidating voice, the lyrics…God, who can believe the lyrics? Mind you, this was not long after Saturday Night Live‘s “White Guy Rap” was the talk of suburban block parties in 1985. In Midwestern suburbia, Rap was mostly considered silly. The onslaught of Gangsta Rappers and Sista Souljah was a few years out. Even though my crew and I would discover NWA the following spring, we were a subset and I was interested in the funny lyrics more than anything else. So yes, Rap was certainly on the radar, especially among young, urban (or wannabe) males, but what possessed Kentucky Fried Chicken to think this was an effective training tool?

MP3: The Colonel and the Gang – “Costs Just a Little, Love ‘Em A Lot” from the Chicken Littles Greatest Hits flexi-disc.

Who knows? All I know is that while we’re getting self-righteous about Billy Corgan and Stephen Malkmus and who’s indier than thou, some poor slob must have been facing some serious artistic and existential shit when he penned this doozer. 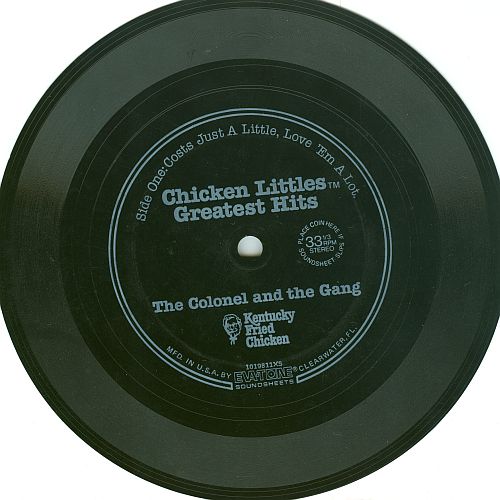 Working at KFC was a significant time in my life. It was during those eight or nine months that I dated one of my first true loves and also when I started to think about being a musician. It was an unusually musical place with several musicians behind the counter, including my then-mentor Bill, a character named Chef Tim the Bulldog and an aspiring R&B producer named Andre who incessantly name dropped his association with the DeBarges, then Grand Rapids’ resident pop music royal family.

I spent a lot of nights learning Beatles harmonies with Bill, discussing the Monkees with Chef Tim while we mopped up grease from the massive fryer, and suffering through Andre’s awful demos. As it turns out, making Chicken Littles was lots of fun.