Maybe it took me five years to realize that my favorite moments always came unexpectedly, after haphazardly stumbling across great sets like Matt & Kim in 2007 or Deerhunter in 2009. Of course, if you try to force those moments they never come. Maybe that’s the lesson I learned this year.

Or maybe the real lesson I learned is that I might be ready for a break from big summer festivals. Since 2005, I’ve been to every Lolla and almost every Pitchfork Fest, and it’s no secret that these two events book the same bands over and over and over. An outdoor festival is hardly the optimal situation to see a band like Spoon, but they’ve played festivals here five summers out of six: Lolla 2005, Fork 2006, Lolla 2007, Fork 2008, and Lolla 2010. The one Spoon show I really loved was when I saw them indoors at the Vic in 2008.

Nevertheless, Lollapalooza is always a fun time and even though there were definitely some issues this year, they seem to have finally solved a couple of my biggest beefs from years past. By expanding the footprint of the festival across Columbus Drive and spreading out the secondary stages, they finally eliminated the soundbleed that has plagued every Lollapalooza since it settled in Grant Park as a destination festival. This was great.

A related benefit that I hadn’t anticipated was that opening up Columbus created something of an West Beltline that allowed you to get from the north side of the park to the south side in a relatively short period of time. In years past, you had to pass through three separate bottlenecks to get around Buckingham Fountain. It’s one mile from Roosevelt to Monroe but it would take you no less than 30 minutes because of the thick crowds. This year, if you hoofed it you could leave the north area at 4:15, pee, watch a couple songs by a band on a side stage, buy a beer, and make it all the way to the south side to find a good spot to catch the last 15 minutes of a band that ended at 4:45. That’s a real life example that we pulled off on Saturday (XX -> Dawes -> Gogol Bardello).

So that made it feasible to sample a lot more stuff than before. Which is why legs are so sore.

When I arrived at the park, the Walkmen were playing. After AMP and I got our credentials we wandered around the media tent for a few minutes. They actually had real food in there this year (Potbelly’s!), but the fact that it’s located in the absolute southernmost corner of the park guaranteed that we’d never go back in once we found our way out. We grabbed our free waters and started our trek across the entire park to see Mavis Staples. One thing I immediately noticed was the new water vendor used rectangular paper bottles like coconut milk. I’m sure it’s green (or something) but it totally throws off my greatest festival strategy: buy a bottle of water every time you buy a beer and shove the cold water bottle down your pants while you drink your beer. Keeps you cool and hydrated! You can’t really do that with these new containers. Oh well.

Early Friday is the best time to get to Lollapalooza. A lot of people are still working and the ground is still relatively clean. On Thursday I happened to be in the neighborhood and saw an entire flock of Canadian geese s(h)itting in the park. The geese were no longer there on Friday, but there was plenty of olfactory evidence that they had been. Stanky. The Walkmen sounded jangly and nice as we walked by them. 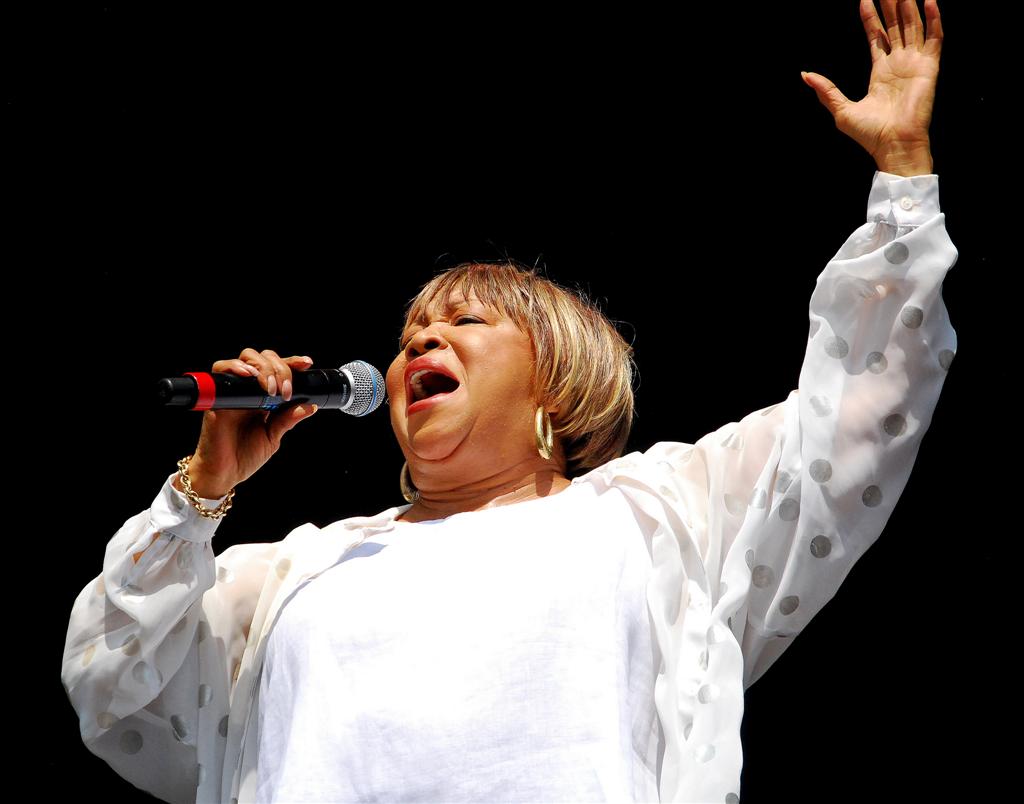 We arrived to the main south stage just as Mavis Staples went on. She looked great and sounded amazing. Her line-up was Staples Singers perfect: background singers and Pops-ish guitar player on the left; bass player on the right; drummer in the back; and Mavis right in the middle with that huge voice of hers. There’s nothing quite like listening to live gospel music while you’re baking in the sun, catching a buzz with pals. We were coordinating meetups with additional folks and totally missed the fact that Jeff Tweedy joined her on stage for the first time. He came back later for a cover of one of the best songs ever written, CCR‘s “Wrote a Song for Everyone,” which was as powerful as you can imagine. 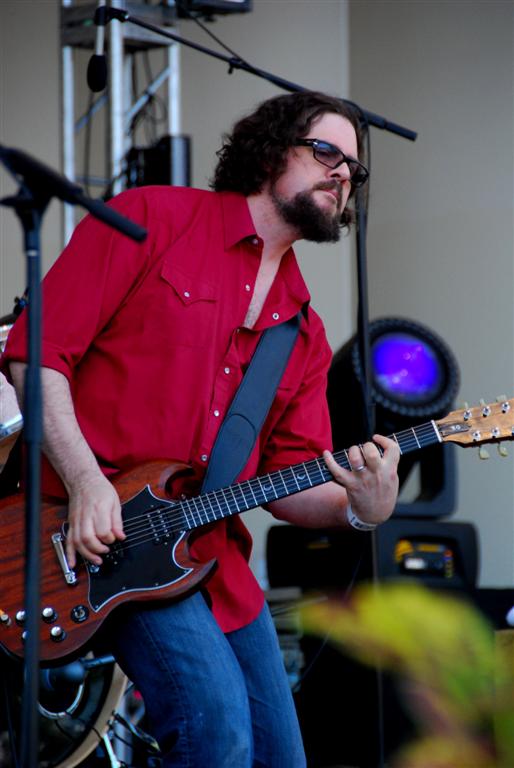 We watched a few songs by Drive-By Truckers, but I’d never given them much of a chance. Conceptually, I love the whole idea of reclaiming Skynyrd with the big frontline of guitars and all that. But we felt compelled to get moving. We wandered around aimless for a bit, looking at people and merchandise and figuring out the new layout. I’m pretty sure we heard a few minutes of Cymbals Eat Guitars but they left no impression on me whatsoever.

While AMP went off to shoot Devo (pics), I met up with Jolie who had worked all day. The first item on our list was Semi Precious Weapons whom I had absolutely hated (without ever actually hearing their music) based strictly on their claims of “bringing rock’n’roll [sic] back.” Sorry dorks, I didn’t realize it had gone anywhere. But then I read this interview and decided I liked them. Fickle fickle motherpickle, that’s what I am. They lived up to expectations. The stage banter was the best: “Dance! Fucking dance! It’s rock and roll, but you can still dance!” They look like Duran Duran and sound like KISS — I’ve gotta imagine they’ll be huge. It doesn’t hurt when Lady Gaga gets up on your stage in a shear outfit and then crowdsurfs, twice, eventually popping back up topless. I felt sorry for the bodyguards assigned to protect her. “Oh shit, what the FUCK did she just do?”

We met up with the posse for Matt & Kim. The crew this year consisted of me, AMP, Jolie, and my cousin Angie, who came in for the weekend. Our Brooklyn girl Collier was there, too, as was Johnny Loftus, but with spotty reception (it was better this year, but still…) and different schedules, we never hooked up. I kept a virtual eye on them via Twitter, although I still don’t understand why AMP could send GLONO tweets but mine all got backed up. Whatever though. We found a good spot for Matt & Kim, up on a hill where we could watch the mass of people running toward the stage. Running! For Matt & Kim. I didn’t realize they were so huge. 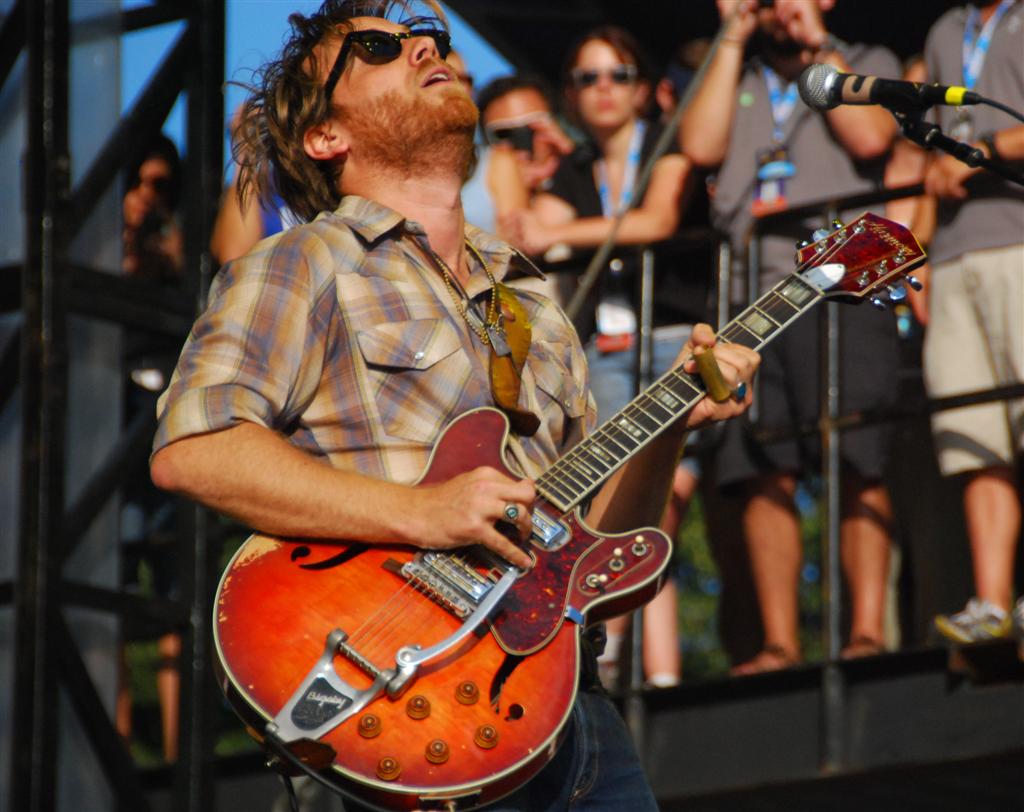 I got a little nervous a fcouple months ago when they announced that the food situation at Lolla was getting upgraded by a fancypants Chicago chef. I was nervous my humble falafels would be downsized. Thankfully, they were still there and I ended up eating seven over the weekend. The first was after we left Matt & Kim. We needed some shade and found some across the street from the Fuck Buttons who endlessly repeated themselves until we couldn’t stand it anymore. We wiped the rooster sauce off our chins and wandered around, catching glimpses of the Black Keys and Hot Chip.

The big plan was to meet back up with everybody before Lady Gaga, so we wandered back to that side of the park to scope out a spot. Unfortunately this required sitting through most of Chromeo‘s set whom I’ve seen before and hated. But I went in with an open mind, thinking maybe I had previously just been uptight and grouchy. Nope, they suck. By the end of their set I had a throbbing headache that I knew I couldn’t drink my way through. Water didn’t help. But Lady Gaga was coming up and I was excited. 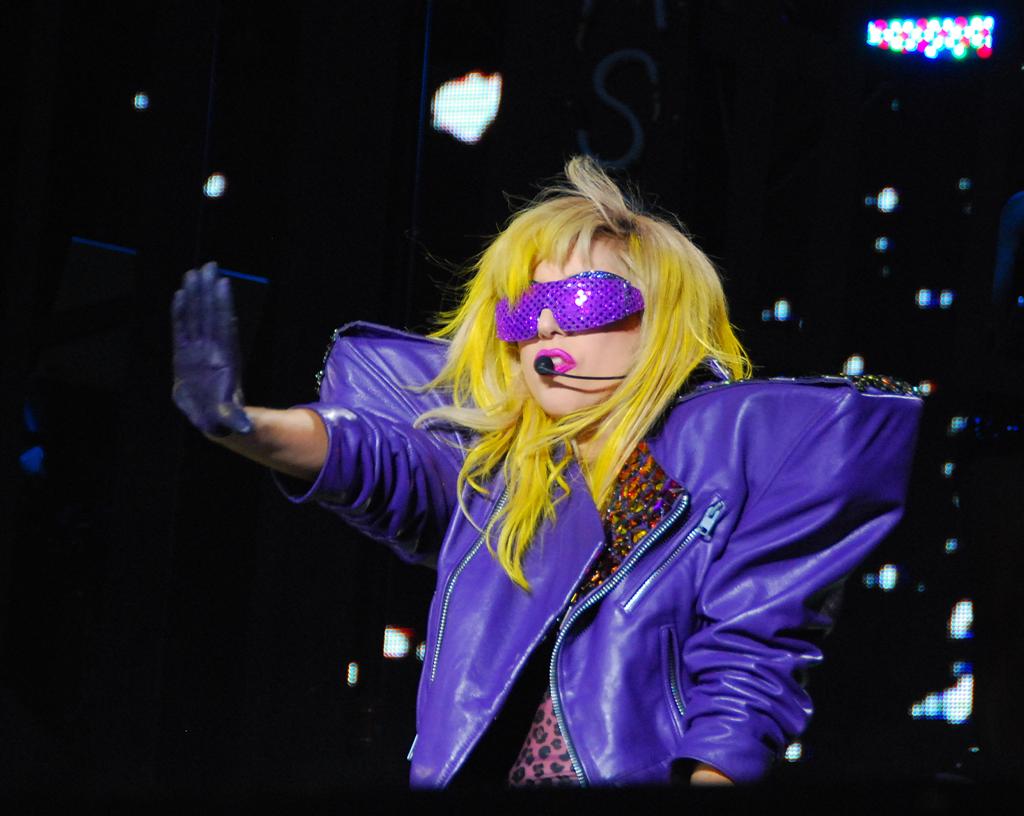 I was originally upset that I had to choose between Gaga and the Strokes. I never got around to seeing the Strokes back when they mattered, and I’ve always regretted it. I blame Loftus for not dragging me along to the Metro in 2001. But then Collier set me straight: “I’m not trying to see some white boys rehash their glory years.” Word. The Strokes could wait. Even if I have to wait another couple of years to see them, seeing them in 2012 is going to be no different than seeing them in 2010. I should’ve seen them in 2001. Lady Gaga is at the top of her game , and missing her now would be like missing Madonna on the Virgin tour. Oh yeah, I said it. And I mean it.

But then a funny thing happened. Lady Gaga started…and she was boring. She performed the first song with the curtain down, so all we could see was her silhouette. Then the curtain went up and revealed the elaborate stage with the neon car and everything. And she performed a song, and then she talked about freedom and being who you are and some other hippy nonsense, and then the curtain came down again so she could change her clothes and before long I realized that a half-hour had passed and I was bored. “Disappointed” hardly feels adequate. Is there a word that describes the emotion of being so let down that you get mad—mad at the person who didn’t live up to your expectations, and mad at yourself for having unreachably high expectations in the first place?

It wasn’t just me. My crew was all on the same page, so we got the fuck out of there and jumped on the Columbus Drive expressway and hightailed it to the Strokes. As soon as we got close enough to hear the familiar guitar lines of “New York City Cops” we all instinctively picked up our step. By the time we made it onto the field, we were dancing along with everyone else. This is my kind of music. I looked around. Everybody was dancing and happy and a little grubby and appropriately tipsy. These are my people. Every song they played was a hit. At least in my world. Even the two songs I didn’t know sounded good.

The Strokes are great and now I feel guilty for blowing them off after their second album and piling on the backlash. They’re a tight band with a great sound and an ear for writing perfect pop songs that make girls dance. What more do you want? Too bad the guys in Semi Precious Weapons were on the other side of the park riding Lady Gaga’s disco stick, or else they could’ve learned a thing or two about bringing rock and roll back. For real. 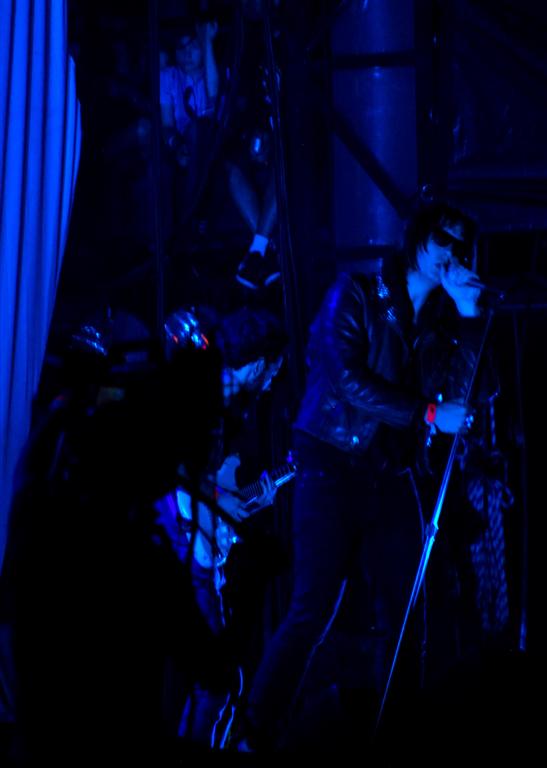