Sure it was. So we ate breakfast, got dressed (size 4T GLONO shirt and matching clownfish socks, of course), and just as we were getting ready to head down to Grant Park…rain. Chicago meteorologists don’t deserve to call it a forecast. Even Tom Skilling, the guy who loves the weather more than anybody on earth, got it totally wrong.

So…new plan. Take the kid down there once it cleared up, hang out for a bit, and have the sitter meet us across the street at Millennium Park at 4:30 for the hand-off.

I’ve always hated the idea of bringing a kid to a big music festival. They never seem like they’re having that much fun, and they always look like they’d rather be home playing with their toys. It’s like Paris Hiltion with her little chihuahua, just parading it around as a fashion accessory. Or just a “see what a hip parent I am?” gesture. Lame. 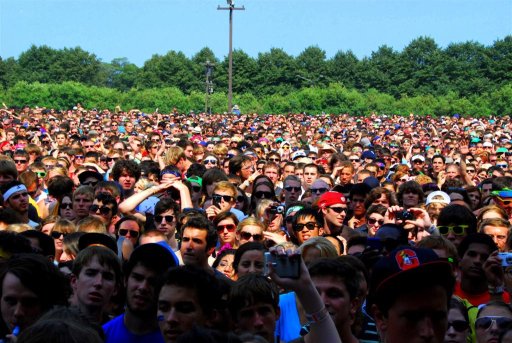 But now I realize the real reason people take their kid to music festivals: to save eighty bucks on a babysitter. Think about an additional $10/hour (cheap!) on top of the price of your ticket. Are you having $10/hour worth of fun? Is it worth it?

So I asked my kid if he’d to go Lollapalooza with us. “Sure,” he said. Then I asked if he’d rather stay home and play with his toys. “Um, stay home and play with toys,” he said. Okay, but let’s see what they’ve got going on in the Kidz area, I suggested, pulling up Lolla’s website. Rock Star Video Karaoke? No interest. Kidz Paint Party? Nope. Hip Totes with Paul Frank? Nah. Skateboarding Workshops? Watch skaters from Character Skateboards do their tricks up close and personal. Then learn some basic moves and the importance of safety with The Chicago Youth Skateboard Project. Bingo!

So we set off for Grant Park imagining the impending excitement…

“Definitely. But I’m not sure if they’re gonna let you…”

“No, actually I want a black skateboard.”

The anticipation was making me nervous. I was hoping to get there in time to make it to the south side of the park where Johnny Marr was playing with the Cribs. I’ve seen Johnny Marr in almost every post-Smiths band he’s been in (the The, Electronic, the Healers, Modest Mouse), so I was really hoping to check out his new gig. But, as is often the case, kids wreck your plans.

We made sure the Peltor earmuffs were securely in place and walked into the park via the North Entrance as Blitzen Trapper was playing. They sounded good, but we were on a mission to find some skateboards. We headed toward the Kidz stage. Dan Zanes was playing, so he danced for a bit and ran up and down a hill with some little girls. Got a temporary tattoo of a pink Paul Frank devil. Then I saw the sign with the schedule. Turns out the skateboard thing was from 2 to 2:30, and we got there at 2:45. Missed it.

I broke the news and it wasn’t handled well. Disappointment is tough for a three-year-old. So what’s a parent to do? Lie.

“Well, maybe there’s some skateboard stuff somewhere else. Let’s walk around and see if we can find something.”

So we spent the next hour walking around the park, looking for skateboards. Didn’t find any, of course, but he got in on a little frisbee action with some strangers and we ate some ice cream (and a falafel) in the shade while Hockey played across the street. They sounded like Vampire Weekend, a fine soundtrack for eating ice cream and chasing dragonflies. Nothing like ice cream and dragonflies to make you forget all about skateboards. He ended up having a blast. Just another fun day in the park…but with sound blocking headphones.

On the way out of the park to drop him off with his babysitter, we were nearly knocked over by a bunch of fencejumpers. As we got closer to the exit, we saw a security guard on the ground with his knee in the back of a 13-year-old kid, twisting his arm behind his back and handcuffing him. The kid was crying. Other security goons had a few older kids in similar positions, while Chicago’s finest looked on from the sidewalk.

I felt bad for the crying kid. You know he got talked into it by his older friends, and he just happened to be too slow to get away. “Don’t ever do anything stupid like that,” I said to my kid who was riding on my shoulders. “But remember, you have the right to remain silent and you should never say anything to a cop without a lawyer.” He wasn’t paying attention. We made the handoff and grabbed a beer and relaxed in the shade for a while. X Japan was blaring through the park. I’d never heard of them, but Jolie told me this was their first ever show in the United States and they’re huge in Japan. They were very loud. A shirtless dude on ecstacy floated by us, gently flapping his wings in the breeze. X Japan continued to wail.

Thoughtful sequencing to have Erykah Badu sandwiched in between a screaming metal band and Wolfmother. Idiots. Not quite as bad as having Mavis Staples scheduled at the same time as Raphael Saadiq on Friday, but come on. They clearly don’t care about making things pleasant for soul fans. When Badu finally came on after twenty minutes of warmup music from her deejay and band, she looked amazing. Huge blonde faux-hawk and giant gold earrings. She looked like an alien goddess. And her voice is incredible. But we’d been frying in the sun for over a half-hour by the time AMP emerged from the photo pit, so we decided to split. The south side of the park still smelled like gooseshit and the temperature had been rising steadily all weekend. Friday had been perfect, the nicest weather in Lollapalooza’s history, and Saturday was fine, but Sunday was the typical August day in Chicago: brutally hot and muggy.

I was excited to see MGMT again despite the fact that I was not properly inebriated this year. More than anything, I was interested in seeing how the crowd responded to the new material. The crowd was huge and went nuts for “Electric Feel,” but when that was followed with “Flash Delirium” everybody around me completely stopped paying attention. It was comical. They just didn’t care to even try to listen. Most people seem to be fans of songs these days, not bands. Maybe that’s always been the case. I don’t know. But the on/off switch in the audience couldn’t have been more obvious. The shuffle feature has shortened our collective attention span to the point where a 45-minute set is 25 minutes too long. It’s time to bring back Dick Clark’s Rock and Roll Revue, where each band plays for 15 minutes. We’re in a singles market again. Just play the hits!

Or maybe not. We listened to MGMT‘s whole set. No running around to catch a couple songs by Cypress Hill, no more falafel expeditions. Just hanging out, sipping beer, and letting the music casually swirl around us. We did, however, retreat back to the less crowd area by the Petrillo Band Shell. You can see the other stage okay and you can hear fine. So we found a nice piece of cement, laid the blanket down, and chilled out for a while.

There was a lady in a silver tubetop standing up in the VIP area who kept leaning over the rail and flirting with dudes down in the general admission area, trying to get them to go fetch a beer for her. To my fellow schlubs’ credit, nobody got her a drink. And to everybody’s disappointment, her boobs never fell out of that tubetop…as close as they came a couple of time. I’ve never gotten into the National, but the last couple of songs I’ve heard have sounded really good so I was interested in seeing them live. If a band can get to me in the live setting when I’m mostly unfamiliar with their material, there’s a good chance I’ll become a loyal fan. And I finally feel like I got them. The voice doesn’t sound as Ian Curtis as it did when I initially listened to The Boxer after everybody in the world was drooling over it. Well, everybody in the online indie rock world anyway. I wasn’t into it.

But this time, everything came together and I appreciated the sound of the band. It makes sense to me now, so I guess I’m going to have to pick up the album. And that’s the good thing about big music festivals: you get a chance to see bands you might not otherwise bother with. And sometimes, if you’re very lucky, you’ll happen to be paying enough attention for something good to make an impression on you. That makes up for the various hassles. AMP stuck around for Arcade Fire and Soundgarden, but I had to go home and go to bed. I’ve always hated Soundgarden’s bullshit metal, and I saw Arcade Fire at Lollapalooza back in 2005, so I didn’t feel bad. Besides, I knew I was going to have to wake up at 6:30 the next morning and after three days of fun in the sun, it was time to rest.