The idea of Lightning Bolt as free jazz was mentioned by some dude standing near us in the crowd, and later I heard Greg Kot say it, too. I’m not sure it’s accurate, but then again, when I think of free jazz it’s usually in a blur of half-rememberd Tzadik album covers or whatever bizarre/awesome thing Hamid Drake is up to at the moment. I’d rather put Lightning Bolt alongside The Locust, a Southern California group infamous for grafting insanity onto a steel frame of complexity. And they wear masks, too.

After Lightning Bolt we were shunted into the corner of the park for a bit of Surfer Blood, the Florida combo who made waves this year with the huge chords and 90s-leaning indie sound of “Swim.” They probably shouldn’t have been playing to so large a crowd, but Blood proved game despite the sound issues and a bit of what seemed like nervousness. And by the time they got around to the 37th best song of 2009 (according to their hosts), it was a real collective head bobber out in the heated throng. 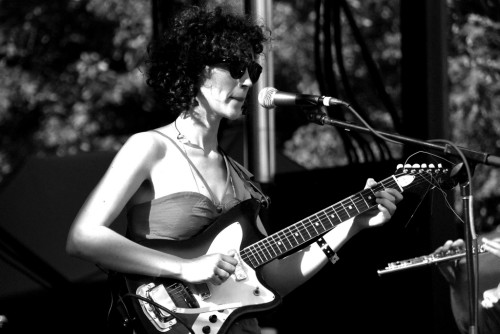 While Johnny was trapped in the Balance Stage, we checked out St. Vincent.

And yet, despite that highlight, Surfer Blood was just one example of what Jake Brown articulated best: indie rock just doesn’t do it for a lot of people anymore. Jangly, midrange, and probably earnest, it seems to come off mostly as indifferent. As a sound, it increasingly feels like a grandfathered in placeholder, something to carry the torch that Pitchfork’s reunited Sunday headliner had so artfully helped loft 15 years ago.

Now, this is probably the province of the olds. If Jake or myself or any number of other pals who had similar griping to do were still our younger selves, maybe we’d have been rocking to the indie like it was an Archers of Loaf concert in 1995. But as it was, Sunday’s lineup got the biggest charge from the loud, the lewd, and Sir Lucious Left Foot. 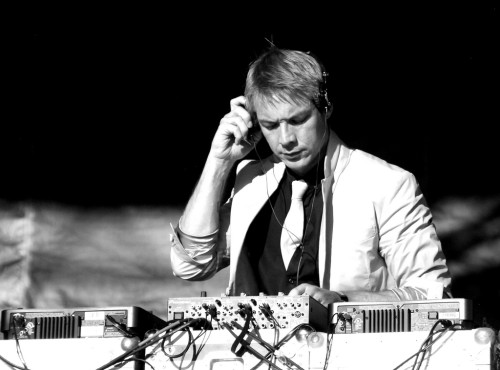 Where Lightning Bolt brought the volume level up, Major Lazer brought the beats, booty-shaking, and pulsing frenzy of a club at 3am to the afternoon proceedings. Flanked by flailing Chinese dragons and supported by a coterie of zero body fat dancers, Diplo and his crew matched the heat in the air with a scorching, unrelenting set of dancehall laced with house, hip-hop, and Soca rhythms. Shit, Rihanna even made it into the mix. There may have been a little too much “What’s up What’s up” and “Chicago I can’t hear y’all,” but what else are you supposed to say when dancers are flying off the DJ riser like it’s a turnbuckle and simulating the craziest sex you’ve ever seen in a public park? They evaporated the water in Jake Brown’s pocket bottle. 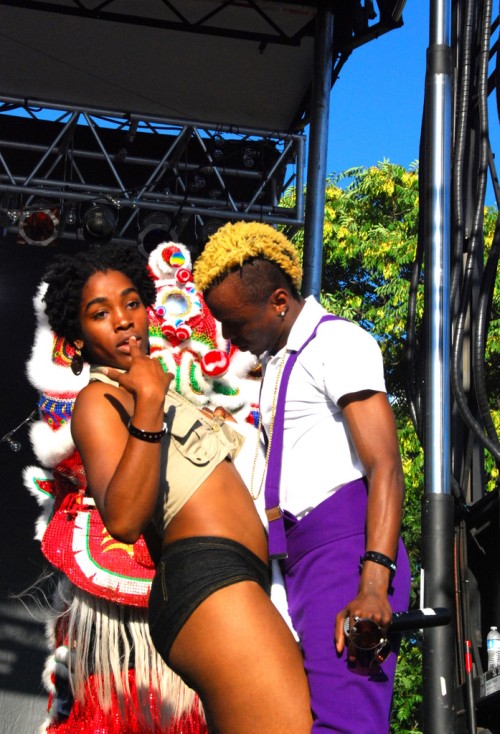 After finally seeing its official release two weeks ago, Big Boi‘s Sir Lucious Left Foot has quickly become a summer party staple. The percolate and pop of “Shutterbug,” alien tingle of “You Ain’t No DJ,” the machismo and proclamations of “General Patton” — these are jams made for yelling along to, and Big Boi brought that vibe and more to the stage on Sunday. 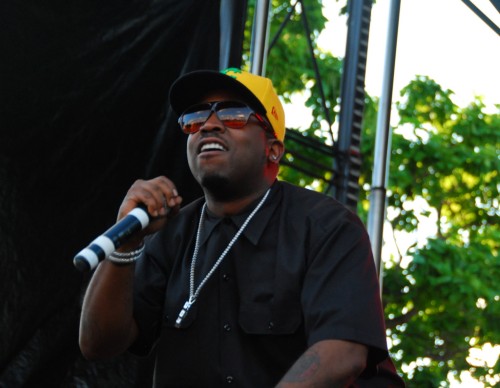 In a set devoid of the usual hip-hop distractions — too many dudes on stage, too much conjecture to get the hands up, too much standing around waiting — he and his nimble supporting group (horn players!) ran through the highlights of Lucious as well as a thorough tour of Outkast‘s best moments. It was powerful, party-savvy and perfect for the heat. In a word not associated with most indie rock these days, it was compelling. If you’re empty, you can grab a cup.

There was a brief scrum of folks moving to and fro after Big Boi, some to Sleigh Bells — would have liked to see some of that, were it not for the assurance that the same Surfer Blood bottleneck would certainly be in the cards — and then it was time for Pavement. A band from an age when I was younger, when most of the types I was with were younger, when most of those around us were, too, Pavement arrived to an acerbic and occasionally funny intro from Drag City vet Rian Murphy.

Opening with “Cut Your Hair” was a nice nod to their slacker/conformity, too, but it also set up what amounted to a hits set from the band, who sounded pretty tight if just a little sleepy. They were never going through the motions, though, and it never felt like the Pixies reunion, when the icy distance between band members on stage made the music seem rote and cold. Instead Pavement’s set felt like an affirmation of where we’ve been — of where “All My Friends” have been, as James Murphy might phrase it — and as moments of pure singalong wafted through the air, it was clear that plenty of those crowding around the sound tent felt the same way. It isn’t nostalgia if the music feels as vital to our current lives as it did to our collective past. 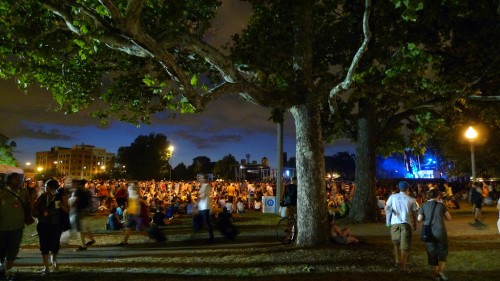 Who is Pitchfork’s marquee draw for 2011? Modest Mouse, Broken Social Scene, LCD, Sonic Youth a few years ago, Pavement in 2010 — the site is running out of top liners. The National would fit, of course, but they’re more of a sleeper pick for a Saturday evening. What about Spoon? Are they too old? Depending how the music and Internet landscape shifts over the next twelve months, we could be looking at an entire day of electronic bananas flying out at the Union Park audience like the plumes of glow stick daggers that shot into the humid night sky during the closing notes to Pavement’s “Silence Kit.”

Glow sticks. They just fade. What a bunch of slackers.