I made it inside on Friday in time to catch up with AMP before Robyn started. All I knew about her going in was that she was another Swedish pop chick who had been embraced by the indie kids. I hadn’t been fooled by Annie so I wasn’t willing to give this year’s version much of a chance. But as soon as she took the stage, I knew I’d been wrong. She made me feel like dancing despite the fact that I was standing with no beer in a gravel baseball diamond in 90-degree Chicago heat with dust tornadoes whipping up all around me. Not ideal disco conditions at all, but I almost danced. I nodded my head vigorously. More vigorously than I would for the rest of the evening. 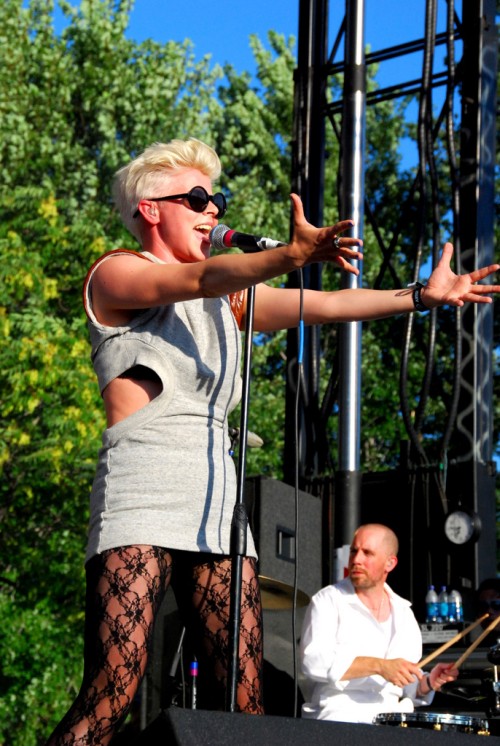 Once AMP emerged from the photo pit, my thirst overwhelmed me and we headed back to the beer lines, which were long and intimidating but moved fast. From far back the music sounded small and generic, not at all the powerful blast of synth and drums and had chest-bumped me up front. And this is an important reminder for casual festival attendees: it all sounds pretty lame from far back. If you care at all, worm your way up close. You gotta be close enough where you can’t hear the dopes behind you talking about the weather. If you want to be moved by it, the music has to envelop you.

Of course, sometimes the music fails to make an impression even when you’re right up front. Such was the case with Broken Social Scene. At this point I’ve given that band plenty of opportunities, and I can confidently say that I just don’t like this band. They bore me. 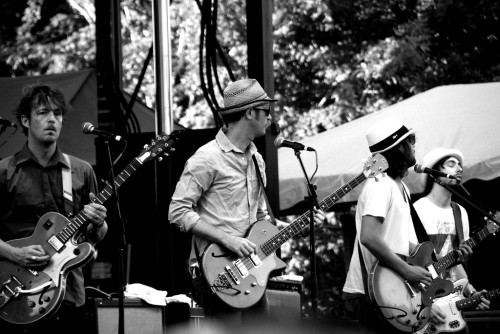 I like Modest Mouse, and I enjoyed their set at Lollapalooza in 2007, but this time there was no Johnny Marr, and after a few songs I started to realize that maybe I don’t really like “indie rock” as a genre. There seems to be such a formula with vaguely “funky” rhythm sections and choppy clean guitars and yelped vocals. It might not be fair to blame Isaac Brock and his band for this, but I do. And when you’ve got two more days of standing around in 90-degree heat, it’s just not worth it to stick around listening to stuff that’s not that great. So I went home after 30 minutes.

I really wanted to see Titus Andronicus. The Monitor (review) is one of my favorite albums of the year so far. But 3:20 is just too early. AMP made it in time though. 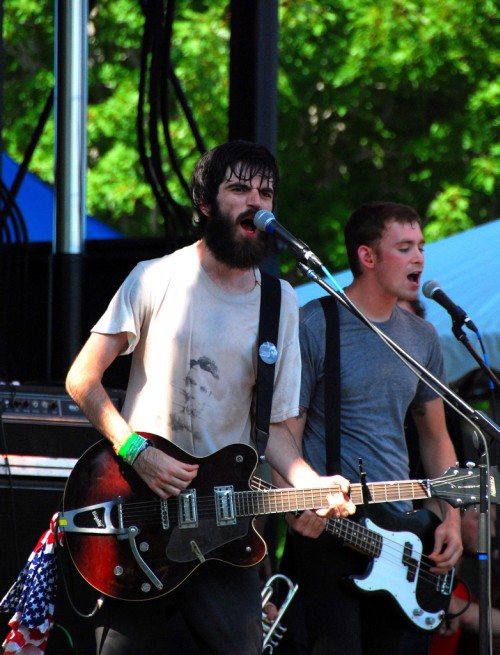 Jolie and I made it in time get beers and meet up with AMP before Raekwon. The Chef’s deejay had some technical difficulties with his laptop that just reminded everybody that hip hop groups should be able to get shit done with two turntables and a microphone. So instead we waited as they tried to figure shit out. It sounded to me like one of the “out” channels on the laptop was fried, so even after they got things going there were long pauses in between songs as they cued up the next backing track, killing the momentum. It was all smiles, though, when they brought up a break dancing crew comprised of children who performed truly impressive helicopters and headspins to the tune of “Wu-Tang Clan Ain’t Nuthing ta Fuck Wit.” A classic moment. 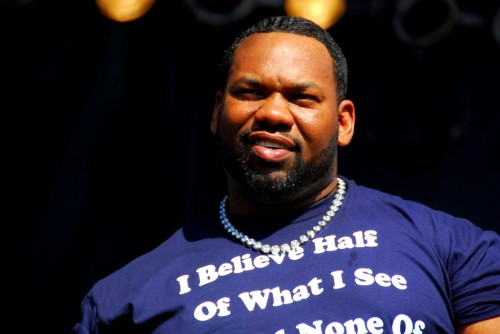 In a brilliant sequencing move, Raekwon was followed immediately by John Spencer‘s reunited Blues Explosion. I love JSBX, and it was great to see him again in this element, sweating profusely in his leather pants and long-sleeved cowboy shirt. Sweat! I saw him with Heavy Trash last year at Schubas where he had seemed almost beaten down by the hecklers in the tiny venue. But with Russell Simins and Judah Bauer with him, he had his swagger back. And it was great. We need Spencer’s version of the blues now more than ever. 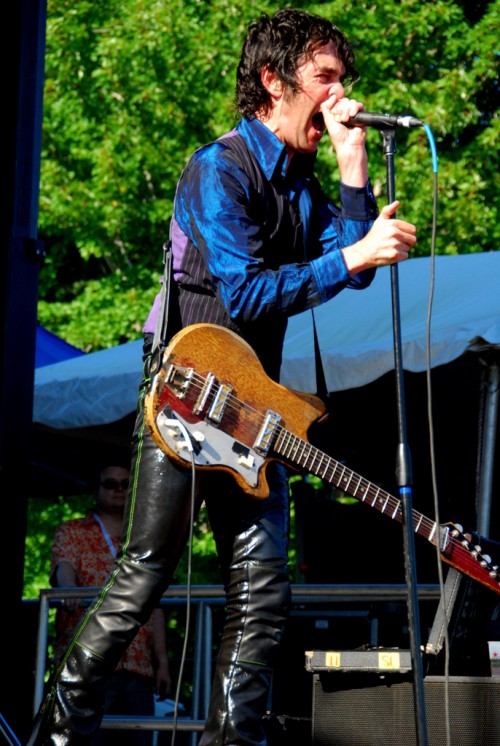 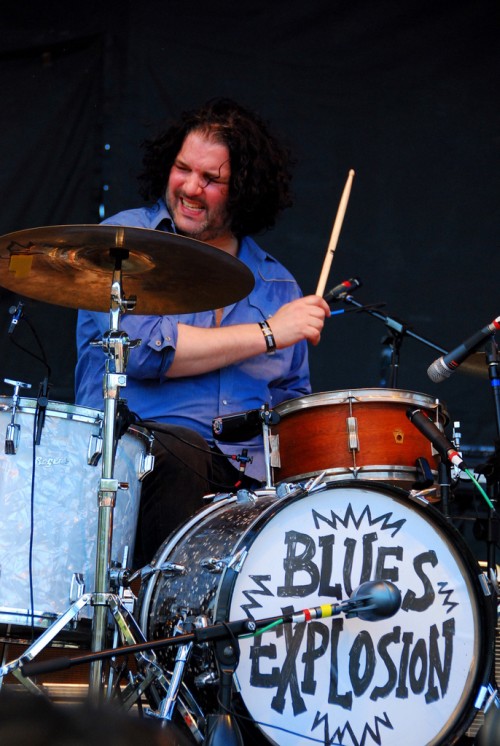 Wolf Parade, on the other hand, has absolutely no swagger and reaffirmed Friday’s revelation that this current wave of indie rock pretty much sucks. It was a good time to eat some pizza. I’ll take this opportunity to complain about the beer selection. Heineken is not good beer, and Heineken Light is worse. On Friday night, they had a third tap with Newcastle Summer Ale, which was better, but come on. How is Pabst not a Pitchfork sponsor? It’s hard to believe. Also, they need a falafel vendor. 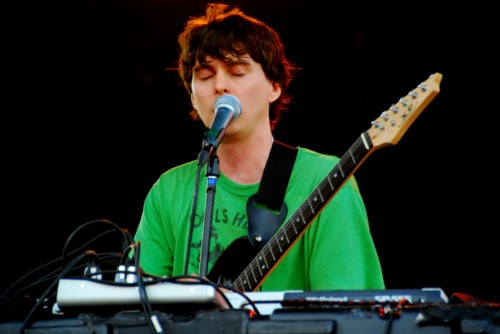 I was excited to see Panda Bear. I enjoyed Person Pitch and loved his songs on Merriweather Post Pavillion, so I thought I knew what to expect. I was wrong. After ten minutes of a pointless three-note synth drone, I assumed he was just testing the crowd’s resolve. I can appreciate that. I imagine it would be fun to fuck with all those drunk idiots baking in the sun. Pretty soon, I assumed, those of us who stuck it out would be rewarded with some of those glorious melodies and layered harmonies. Nope. Dude stood there by himself with a guitar around his neck, diddling his keyboard, searching for the right drum pattern, and occasionally screeching into the mic. Unlistenable. It sounded like a mentally challenged kid fucking around with reverb for a half an hour. Play “Bros,” hippy! We got the hell out of there and found some shade. 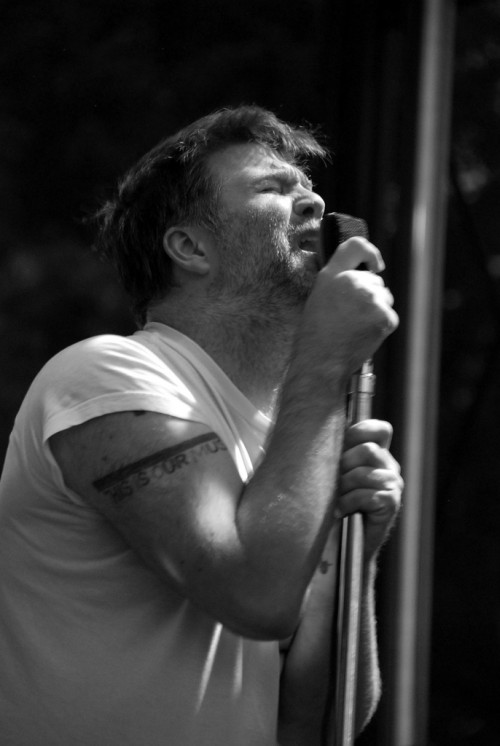 From the ridiculous to the sublime. LCD Soundsystem was great. As the sun went down thousands of kids were taken to a transcendent place via dance music. You could watch it happening. And when they kicked into “All My Friends” an impromptu conga line formed with hundreds of kids dancing together and breaking up the tightly packed crowds. While I’ll admit this was annoying to fuddy duddies like me who had staked out our spots only to have our personal space invaded by these jubilant revelers, you’d have to be a real killjoy to not appreciate the moment. And as they danced around the gravel baseball diamond in front of the stage, a huge cloud of dust rose up like a smoke machine and gave LCD’s lightshow something to project against. It looked magical. Until you inhaled. Unconfirmed reports suggest that Neti pot sales at Chicago Walgreens skyrocketed on Saturday night.

James Murphy knows what he’s talking about. One reason LCD is so good is that they capture that sense of longing for the past while keeping your eyes and ears open to the future. The Pitchfork Fest—with its combination of 90s indie acts (when “indie” was not a genre, but a decision), current hot shots, and up-and-comers—is a great way to spend the weekend for those of us who remember Blues Explosion and Pavement from their first go around. In general, I’m very happy to be living in the post-irony era, and I’m realizing that getting older doesn’t suck nearly as bad as I had feared it would. This is a great time to be alive if you’re a music lover.

And Day Three would end up summing it all up for me with great stuff from the past, the present, and the future. More on that in a minute…