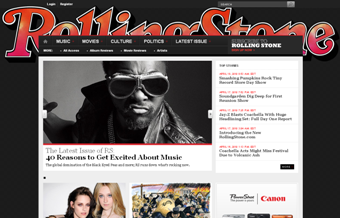 Rolling Stone is taking a cue from Rupert Murdoch by relaunching their online experience with—wait for it—a pay wall. Yes, misery acquaints a man with strange bedfellows and the media industry is certainly in misery.

The Associated Press reports that today’s Rollingstone.com relaunch will not only be a look and feel redesign but also a new approach to their online content and business model.

Homepage content, including top news stories, recent photo essays, and some features from the latest issues, will remain “free” and supported by ad revenue. Access to the full issues will be behind a pay wall, with one-month passes going for $3.95 and annual subscriptions at $29.99. But there’s a twist…there’s always a twist.

Subscribers will also have access to every single issue of Rolling Stone since it first published in 1967 as well as delivery of the print edition, which goes for $19.95 by itself. So, online subscribers will get the print edition thrown in but print subscribers won’t automatically have access to the online version. That’s an interesting tell since we’ve always been told that print readers are more valuable than online readers, thus the difference in ad rates.

It remains to be seen how this all plays out for Rolling Stone but I have a bit of advice to whomever is calling these shots. Your most valuable asset for driving traffic is over 40 years of content. Don’t wall it off from readers…and search engines.

The AP article cites some interesting statistics to back up my recommendation:

• You have a younger audience who is veering to the web in increasing numbers every day. They are savvy searchers and rely less on name recognition for their sources than they do on referrals (like links on Facebook) and Google returns. They’re also aggregators of news and pull from multiple sources. Don’t pull yourself out of their game

• So, the site with a smaller readership had 10 million more page views, each page driving some tasty ad revenue. Need I say more?

• According to the AP report, Taibbi’s story would fall back behind the pay wall once the next issue posted. Given the fact that this Goldman Sachs issue is not going away anytime soon, does that make sense?

Now I’ll add a couple more zingers for you:

• The more pages and content you have, the more there is for the search engines to index and match against search terms. Again, you have over 40 years worth of content. At the very least you need to have excerpts and keywords for every single page that is NOT behind a pay wall

• You have a potentially awesome feature on your hands with the Live in the Office video clips. Capitalize on Rolling Stone’s historical relevance and nostalgia as the music business’s Magazine of Record to get the biggest names and most elusive bookings on your calendar. Then balance it out by allowing users to upload their own videos because we all know the kids in the field are hipper than any Editor on staff

• Syndicate some of this material. My mantra for media companies is that the value in what you have is the content, not the space around it. Look at AllMusicGuide for a basic business model. You could be monetizing historical bios and reviews and syndicating them to iTunes, eMusic, MTV…wherever.

It’s a whole new world out there for media empires. Yes, there are challenges but if you’re willing to reassess your business models and throw out some antiquated practices, it’s a heck of a party. The choice is yours, don’t be late.