What better way to celebrate Father’s Day than to leave your kid with a babysitter and head down to a street festival to see Superchunk? That’s as good as it gets, as far as I’m concerned. And by the looks of the crowd last night on Randolph Street, there are plenty of other dads who would agree with me.

Street fairs are a summer ritual in Chicago, happening every weekend in neighborhoods across the city, but most of them feature the same crappy vendors and the same bland cover bands. You still go, of course, because it’s summer in Chicago, and it feels great to finally be warm and to walk down the middle of the street with a $5 plastic cup of Miller Lite. But Randolph Street boasts some of the best restaurants in town, and whoever books the entertainment for the event knows what they’re doing. Last year’s Taste featured the Posies, Tinted Windows, and the Hold Steady. Several years ago I saw Evan Dando (with Juliana Hatfield!) there.

After grabbing a falafel and a couple of beers, we made it to the west stage in time for the end of Califone’s set. They certainly weren’t trying to appeal to the lowest common festival attendee as they droned and clattered on for the twenty minutes that I saw. I didn’t recognize anything, but was entertained by the backup dancing of the band’s daughters.

As we were staking out a place to stand, who should randomly pop up but Mike West who drew a short series of comics for GLONO back in 2005! Hadn’t seen him in years. He’s living in Michigan and is getting married in a couple of weeks, and came to Chicago for his bachelor party…and for Superchunk! This was already turning out to be a magical evening. 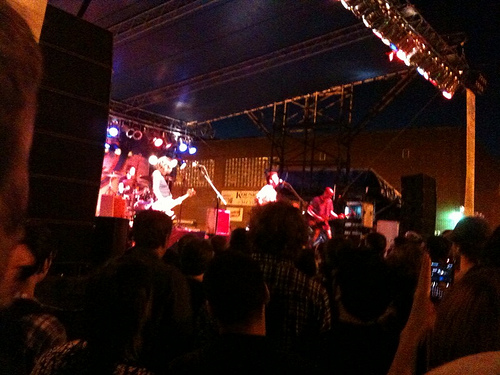 As soon as they took the stage, I was startled by how young Mac McCaughan looked and sounded. The guy is over 40 and still has the exuberance, voice, and haircut of a dude in his twenties. It’s reassuring to see that. As I approach the big 4-0, it gets tougher and tougher for me to conjure the energy to even attend a rock show; I can’t even imagine jumping up and down while banging the shit out of a guitar and singing like you mean it for over an hour…without a nap.

And man, their music is so good. It just takes you back in time and makes you feel young. It’s not even nostalgia because I didn’t really get into them until several years after their mid-90s heyday. I kept looking around me and everybody in the crowd was absolutely beaming. Even the most jaded hipster couldn’t help but uncross his arms and smile when Mac launched into “Slack Motherfucker,” a song that feels even more relevant now than it did when I was slogging away in a menial job. “I’m working. But I’m not working for you!” So good. So true. Still.

After the show, I was happy to see that my favorite restaurant in the West Loop was still open. A quick text to the sitter confirmed she was cool to stay a little later than we initially predicted. So we ordered some chorizo-stuffed dates and cheesy focaccia bread, while Check Your Head was playing. The whole album. I’ve never felt better. It was as if somebody was staging the perfect evening for me, so I could go back and re-experience the 90s as a grownup.

As we were finishing up our food, who should come in and be seated a couple tables down but Superchunk! The cherry on top of a perfectly iced cake. On our way out, I told them it was a great show and to try the dates. Up close, of course, you could tell they were no longer in their twenties, ha ha. But neither am I. And I think we’re all doing alright.

6 thoughts on “Superchunk at Taste of Randolph Street”