“Why?” is perhaps the biggest question resulting from this project, but then again, why release an album that requires four separate cd players just to hear the complete songs? Why spend the good part of a decade making a charming-but-frustrating science fiction Christmas movie? And speaking of Christmas, why release a “Silver Trembling Fetus” Christmas ornament?

Clearly, reasons why are an afterthought of the Lips’—or specifically, Wayne Coyne’s—thought process, which is precisely why the band has remained a relevant force in today’s music. Remember all of those great ideas you came up with while you were stoned? Well, Coyne delivered on his, even if some fail under the weight of their own nonsense.

“But I tried, didn’t I, god damn it,” as McMurphy says in One Flew Over The Cuckoo’s Nest. “At least I did that.”

The Floyd Freaks are rolling in their grave, placing the original Dark Side up there with the Sistine Chapel, equating the Lips’ reworking as vandalism. They see each bit of distortion, every “off” arrangement, and each sonic “mistake” as a flaw, only recognizing the pristine beauty of Alan Parsons’ mix as a gold standard.

But what if the Lips tried to emulate such precision? I think that those cries of “Judas!” would be just as loud and even a few vocal fans of the Lips like myself would also be troubled. A few years back, the Lips did a note-perfect rendition of Queen’s “Bohemian Rhapsody” which was more notable for its facsimile than for its performance.

Not so here, the Flaming Lips treat Dark Side of the Moon like a stoned retelling in your older brother’s bedroom.

Taken in that context, the effort is actually better than it needs to be. The band(s) consider Pink Floyd’s version was in Billboard’s album charts for like a millennium, to the point where the rag changed the rules midstream. The Lips have considered the possibility that you’ve heard the album a few times and—thankfully—ripped the thing through the shredder. “Breathe” is fueled by a two note Suicide bass and David Gilmore’s soothing slide guitar is replaced with feedback. Floyd’s primitive sequencing on “On The Run” is reduced to a Krautrock beat and a nifty guitar sequence. “Money” relies on tour-mates Black Moth Super Rainbow‘s vocoder and a cheap drum machine. It isn’t until “Us and Them” where the similarities begin to reveal themselves—but only slightly. The chord patterns may sound familiar, but it’s clear that the Lips were on a mission to pay homage here instead of playing connect the dots.

What’s telling is how accurate the band is in getting Dark Side‘s crazy quotes—monotonously recited by Henry Rollins—at precisely the same moments as the original. They replace Clare Torry’s octave-bending scales with Peaches’ distorted wails.

All of it, from the originality of the reinterpretations to the barely trying facsimiles, is a hoot. It’s a blast to hear in a social gathering and it’s a joy to examine in the confines of your inner ear headphones.

But make no bones about it, Dark Side of the Moon like its inspiration is a real attempt at taking rock to a higher ideal. This isn’t some thrown together mockery that’s as disposable as the kilobytes holding it together. Only the delivery method (iTunes exclusively) makes the project seem half-hearted, which is somewhat disheartening.

Both efforts are genuine in their desire to challenge the listener and themselves, and both of them deserve to be heard in the format that it was designed for. Since only one of them is and since one has over thirty-five years of permanently embedding itself into the DNA of classic rock, the Lips have an uphill battle with those listeners content with the original.

For anyone who can try to imagine a bizarro world where Dark Side is a clean slate of endless possibilities, the Flaming Lips’ version is as challenging as the one that inspired it. 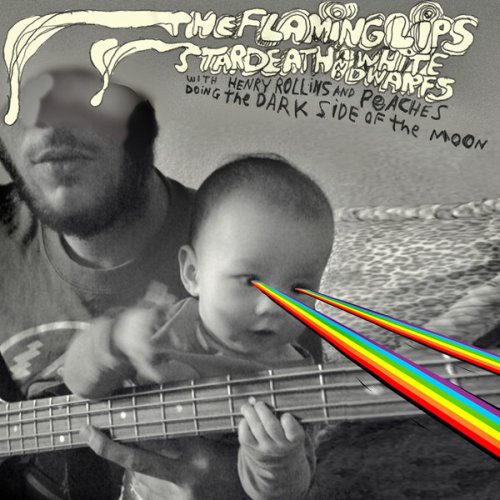 13 thoughts on “The Flaming Lips – Dark Side of the Moon”