While I was driving up to Hampton Beach from Logan airport, I was thinking that I’ve done crazier things than fly halfway across the country by myself for a weekend to see two concerts, but it had been a while. Still, it’s a precedent I’m glad I set.

RatDog was playing two shows over the weekend at the Hampton Beach Casino Ballroom, one of a handful of two day runs on their Summer 2009 tour. Tickets in hand, beachside reservations booked, I rolled into town on a cool, foggy morning.

Hampton Beach is a small beach community in New Hampshire, just north of the Massachusetts state line. It’s hopping with tourists in the summer, with dozens of little hotels dotting the beach road. The Hampton Beach Casino Ballroom is a big draw. It seats 5,000, and it’s been a regular RatDog stop for years.

Early the day of the first show, there was a guy in line, folding lawn chair and all, by 2:30 PM. Mostly because it was chilly, outside the entry to the Ballroom was not a particularly inviting space. It does lead into an arcade, with lots of tourist shops, but it’s just concrete, dirty with age and use, at the Ballroom’s entry. But, sure enough, by 6 PM, the line had grown considerably. The dedicated will line up early for general admission shows so they can secure front row, leaning against the stage and/or security barrier, looking right up at the band.

RatDog usually eases into the night by starting off with a jam that morphs into a opening song. The first night, it was Casey Jones. My first Casey Jones. I’d met an old head at the bar, we had a couple of drinks before the show – he was “yeah, I was at Watkins Glen” old school – and we both went nuts when Bobby broke into this. “And you know that notion just crossed my mind.”

Unfortunately, there’s no audience tape version up on the Internet Archive for the first night. Otherwise, I’d be linking all the songs. Someone uploaded the Saturday show, though.

The boys waste no time moving into the evening’s Dylan cover – All Along the Watchtower. This is a song that’s tough not to get a good jam out of, and Bobby tackles it with enthusiasm. Mark Karan has a lot of fun noodling on this one, and I found it infectious.

Another highlight from the first set was Ship of Fools. “Went to see the captain, strangest I could find…” They also played Victim or the Crime – a late era Dead tune – with great guitar embellishments from Mark Karan. There’s an eastern flare to the song. Minor key? Like lick my love pump? I don’t know. But it was tasty. My first Victim, too.

One of the keys to RatDog is the sax player, Kenny Brooks. He joined the band in 2000, replacing saxophonist Dave Ellis. He does some amazing soloing in Eyes of the World. Around 11 minutes in. It just happens to be one of the longest Eyes I’ve seen. 25 minutes, in fact. 25 minutes of pure awesome. Especially when, around 5:45, Bobby flubs a line, sees it, and says into the mic, “Shit!” But, really, who cares? Too many people dog Bobby for flubbing lyrics, but really, who do you know who can play rhythm guitar and sing 99% of the lyrics for over 150 songs? Frankly, I don’t think there’s anybody else in the world who can do that. Jerry could. And Dylan, who can top it off by being able to play that many of his own songs, not including all the covers he knows.

Second set closer: There wasn’t anything particularly spectacular about the China Cat, but once they rolled into I Know You Rider, it got serious. “I wish I was a headlight on a northbound train!” The Dead injected a weight into that phrase that no one else does, and RatDog carries it forward. It was a brilliant set closer. With a shot of energy from the crowd, it soared. That’s the brilliance of these shows. Everyone contributes to the show – what Phil Lesh refers to as the group mind. Close to 5,000 hardcore fans going nuts. 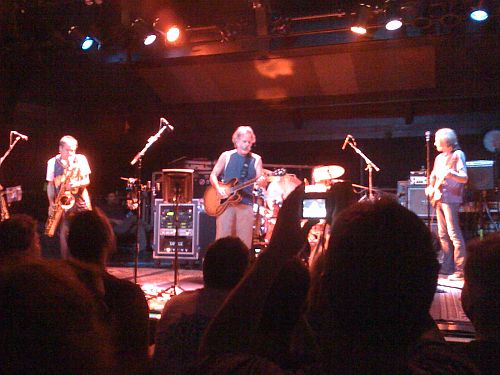 The Ballroom is a great old place. Wood floors, with a rich patina from age. Security was way too hyperactive and in the crowd, and I have to give the management of the venue a big thumbs down for that. There wasn’t that much pot smoking to begin with, but no matter where you were, you experienced security muscling their way through the crowd 2 or 3 times trying to reach smoke, more depending on where you are. Which kind of interferes with the enjoyment of the show. On the positive side, they mostly seemed to give people warnings rather than eject them offhand.

The second night really did it for me. A great sequence in the second set – Desolation Row, followed by Estimated Prophet into The Other One. Mark Karan is a great guitar player in his own right, and it needs to be acknowledged. He has “assumed the role of the mighty,” as the song says. And I think he does a hell of a job at it. A playful delivery of the Dylan epic, followed by a rocking Estimated, into a thunderous rendition of The Other One – it really goes into overdrive about 2 minutes in. Check it out. Don’t give up before hitting 2:30.

Desolation Row just blew my mind. I remember it vividly – where I was, what I was doing when it kicked off, how the crowd reacted. Bobby injects a tremendous amount of emotion into the lyrics – the phrasing is just right, all the way through. He lives this song. Bobby is a great Dylan interpreter.

They closed the show with a Dark Star into Going Down the Road Feeling Bad. The crowd really enjoyed it. And I have to say it was a great road trip for me. Combined, the two shows were a great weekend event. There’s something about multi night runs like this. The band settles in, and so does the crowd, so the energy really soars. The same thing happened on my trip to New York to see RatDog at the Grand Ballroom in October. More on that up next.