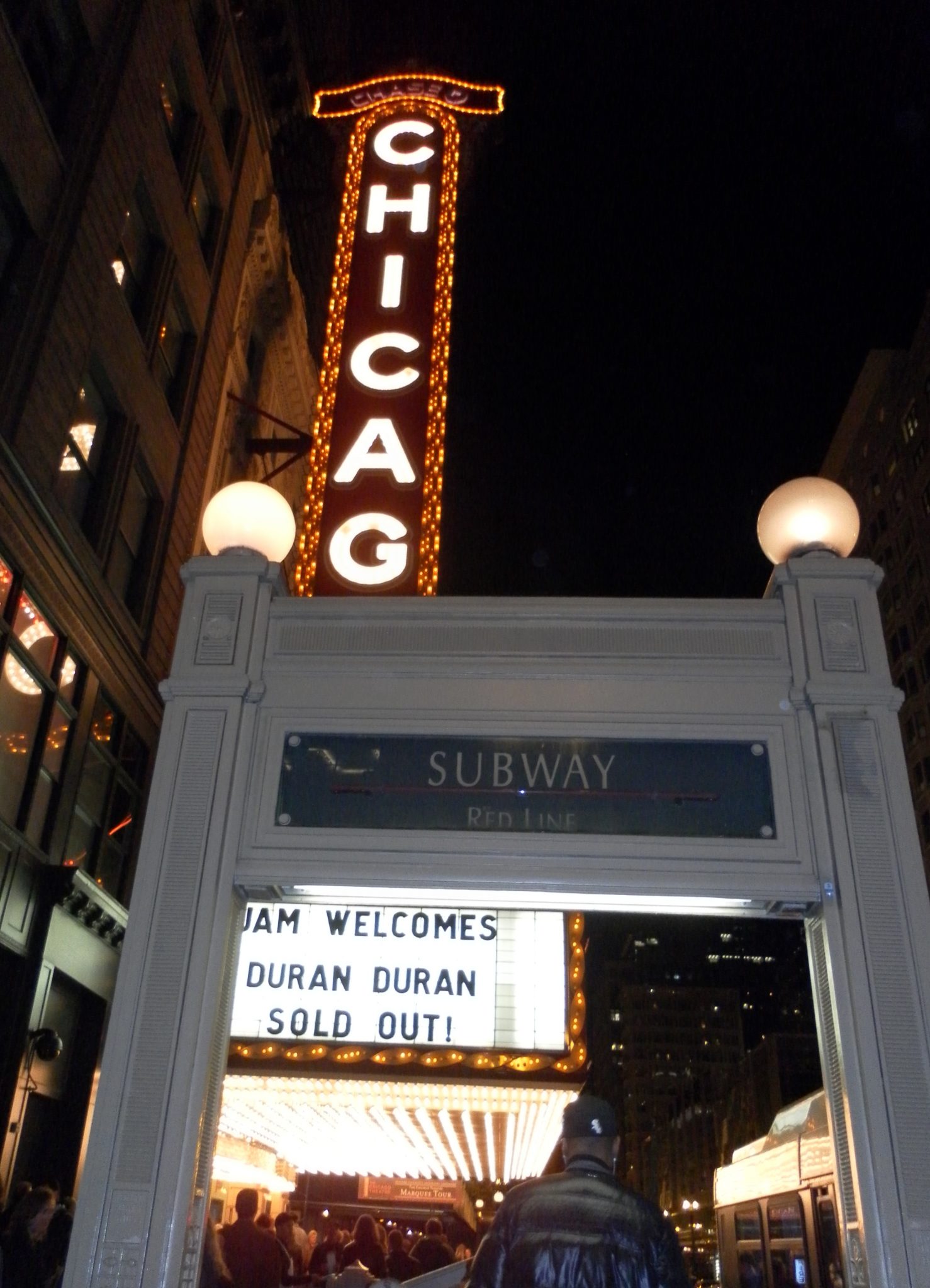 After Duran Duran’s refreshingly retro All You Need Is Now released earlier this year, I’ve been seeking an opportunity to see the band live, curious to learn if these New Romantics could still translate their youthful exuberance on stage.

Yes, at least three-quarters of the crowd would be of the female persuasion and, yes, at least three-quarters of those ladies were 35 or older. But you would have lost at guessing the collective age of the crowd if you had closed your eyes and listened to how loud these ladies screamed the moment the band took to the stage for Friday night’s sold out performance at the Chicago Theatre.

Within seconds, the female contingency reverted to a room full of 14-year-old girls and on several occasions their volume exceeded the band’s.

It was slightly offsetting at time, particularly when Duran Duran used their perfectly composed set list to convey a sense of lineage with art rock influences while apeshit fans couldn’t remember how to use the toilet properly.

I shit you not: my wife reported back to me that the lady in front of her in the bathroom became so excited at the opening chants of “Please please tell me now!” as she entered the stall that she simply pissed all over the toilet seat and left it for my wife to negotiate.

While the lack of civility upset my wife, it only added to my environment. Suppose this woman was a lawyer just hours before? Was this the same kind of behavior she displayed a quarter century ago after a bottle of Boone’s Farm Strawberry Hill wine and a cassette of Arena?

My mind pondered the possibilities.

All of this was fueled by Duran Duran’s blatant attempt at making sure the show would be the polar opposite of what the crowd probably wanted it to be: a nostalgic trip that featured only the hits.

In fact, bassist John Taylor asked the rhetorical question, “Who says nostalgia can’t be fun?!” at one point, treating it like a bumper between the healthy amount of new material right before starting on another one of their endless hits from the 80’s.

The funny thing is that it worked, thanks in large part of how All You Need Is Now acts just like an outtake from Rio or Seven and the Ragged Tiger.

Their stage featured kinetic lighting, most which mimicked old school LED displays and color schemes. Above the stage were four hologram masks where they displayed male faces, the chick on the Rio cover, and–for the artsy “The Man Who Stole A Leopard”–a woman who transformed into a creepy leopard face before the end of the song.

Musically, the band was spot on with Roger Taylor propelling the unit with metronomic qualities. He was quite impressive as was John Taylor in his low-end duties and silver-streaked hair. Nick Rhodes remained stoic and expressionless, save for the band presentation moment where LeBon called out his name and the ladies squealed, causing Rhodes to give up a smile.

Simon, not to be outdone, had the crowd yell out his name during the roll call. And when that wasn’t good enough, he had them do it again after asking, “What’s my full name?!” He looked smashing with his new facial hair and he wasn’t afraid to get a tad political at a few points during the set.

For “Ordinary World,” he offered a dedication to all of the troops coming home from the withdrawal of Iraq. At another point, Simon requested that George Bush and Tony Blair be tried for war crimes, causing a few noticeable boos from parts of the theatre.

But before anyone could get too political, Duran would crank up another pop gem and the crowd eagerly fell in line.

The only drag on the set came during one of my least favorite Duran songs of all time: the instrumental “Tiger Tiger.” For some reason, the band chose this song to introduce a momentum stopping Twitter interlude where attendees could tweet their thoughts to the band and the messages would appear on a screen behind them.

So essentially, we got to hear a brief intermission piece while people in the floor section (it was a bit fuzzy in the balcony seats) could read things like “Damn I look good tonight!” and “John is so HOTTT!!!” from their neighbors.

Thankfully, “Tiger Tiger” was the only setback (unless you encountered poor manners in the ladies room too) that I could find with Friday’s performance. If anything, Duran Duran demonstrated the right way to avoid the nostalgic trappings of a band that could easily fall into the hands of revival tours and state fair circuits. They’ve chosen to abridge their newer material with the best parts of their past making a seamless setlist of old and new.

Score one for Duran then, and while the crowd may need some work in order to match the band’s perfect blend of nostalgia vs. modern chic, the first item a certain fan should follow is “If you sprinkle when you tinkle, be a sweetie and wipe the seatie.”

Before The Rain>Planet Earth
A View To A Kill
All You Need Is Now
Blame The Machines
Come Undone
Safe (In The Heat of the Moment)
The Reflex
The Man Who Stole A Leopard
Girl Panic
Is There Something I Should Know?
Tiger Tiger
Careless Memories
Leave A Light On
Ordinary World
Notorious
Hungry Like The Wolf
(Reach Up For The) Sunrise