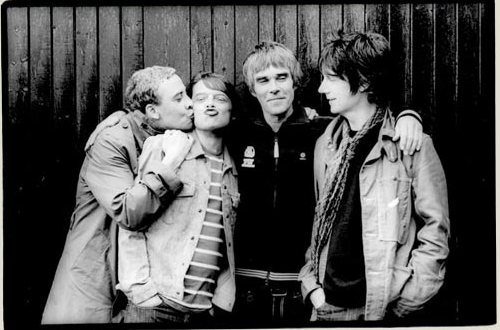 Well, the NME has done it again. Whether through constant haranguing via the publication of rumors, amazing sources with inside information, or dumb luck and wishful thinking, the voice of British music news has seemingly brought about another reunion. And this is no ordinary reunion, but one of the least likely and most wanted among anglophiles: The Stone Roses.

After 17 years, the band that launched Madchester will play two confirmed dates in June, 2012 and then a reported “world tour” to follow. Additional dates have not been announced and this is where I get worried: June is a long ways away and the Roses have never been the most reliable band. Not to be a buzz kill on your ecstasy-fueled rave, but a lot can happen in eight months…or worse, nothing at all.

The Stone Roses’ fame begins in earnest in the summer of 1989 when their debut album spread its druggy-pop sensibilities around the world, from one hip record store to another until little baggy jean communities popped up like pimples on a fresh face. Despite their legend, the Roses were never a HUGE band on the scale of U2 or Depeche Mode, but their influence was felt and it was deep. The release of their nearly ten minute dance-rock classic “Fool’s Gold” (originally the b-side to “What the World Was Waiting For”) established the band among the hip as THE BAND of the moment, especially in the UK where they were a big commercial success.

Whether tempted by dollar signs or friendlier confines, the Stone Roses decided it was time to leave their label Silvertone and fulfill their promise to rule the world. Little did they, or anyone else, know that they’d be tied down in court for four years unable to release new material until they’d extracted themselves from a five-year contract.

Never one humbled by their fame, The Stone Roses finally returned with their second album, The Second Coming. While aging better than initial reviews would have you believe, it was less than rapturous and the band finally broke down in 1996 when guitarist John Squire left the band barely a year after drummer Reni had already called it quits. It was a whimpering end to a spectacular band.

For nearly two decades the band’s image grew beyond its actual history and a band with two albums and a handful of singles was now revered as “the last great British band.” Nobody—not Oasis, not The Libertines, not The Arctic Monkeys—could touch their legacy. It was such that John Squire scrawled the following words on a piece of his art in 2009:

“I have no desire whatsoever to desecrate the grave of seminal Manchester pop group The Stone Roses.”

Which leads us to this week. Rumors of their reunion have come and gone for years. It seemed ridiculous to even consider given the public acrimony between Squire and singer Ian Brown. But time heals and here we are. And make no mistake, I am excited. Enough that I have already declared that I will break my top price ceiling of $50 to see any artist live. I will do what I must to see any US dates. But I am worried. The Stone Roses were never a great live band. Ian Brown’s not a strong vocalist and Squire’s guitar playing hasn’t been heard in years. Reni himself said that drummers should hang up their sticks when they hit 35—this was AT the press conference announcing their reunion!

But let’s not dwell on all that. One of the pillars of musical upbringing has reunited to shower us in their house music-inspired pop. Let’s rave on and hope that the wheels don’t come off until we’ve had a chance to dirty up our baggies and sway in our bucket hats one more time.

Previously:
Documentary: Madchester – The Sound of the North