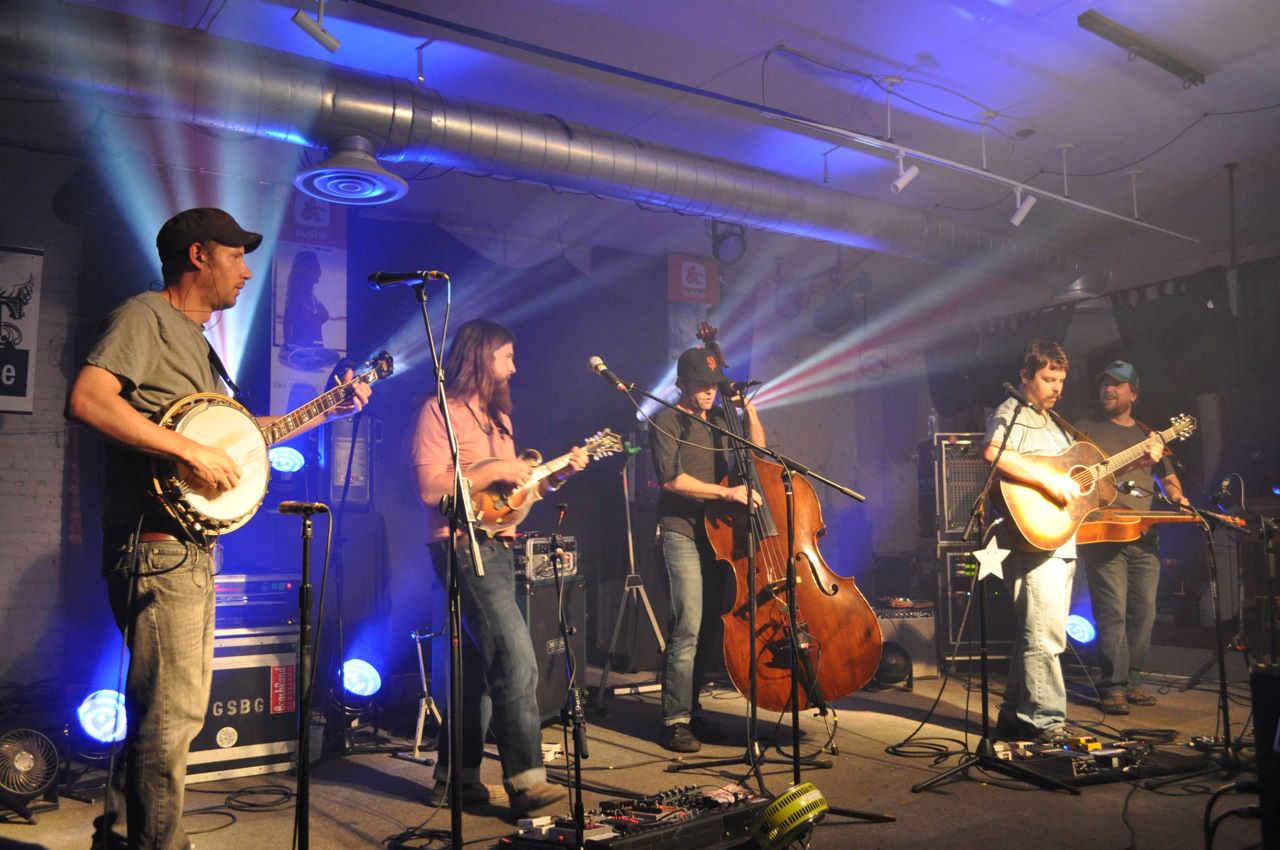 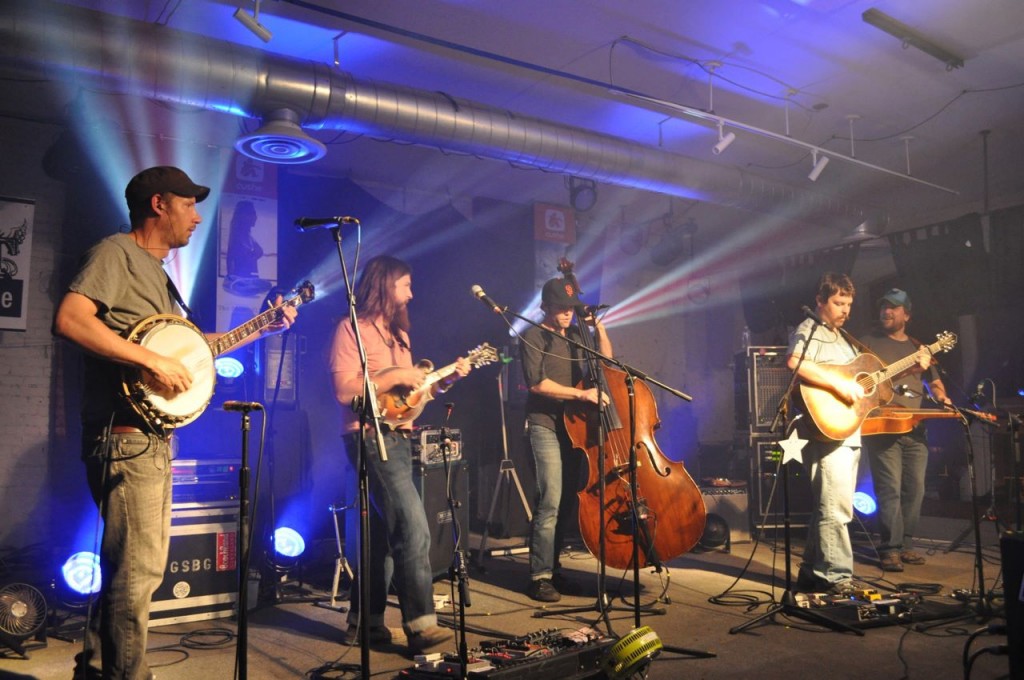 The thing that struck me the most about this Greensky Bluegrass show was the crowd. By the time they stepped on stage, The Loft was packed with people. The excitement and anticipation in the air was electric. During the show, almost everyone was dancing – to music that lacked a traditional drummer or percussionist of any kind. Just the percussive banjo playing of Michael Arlen Bont, which drives the beat and the feet on dance floor. Lansing, young and old, clearly loves Greensky Bluegrass.

I got there early enough to see all the opening bands – Whiskey Riders, Flashing Blue Lights, and Josh Davis (playing solo, a Stepping in It veteran). Up until Davis started playing, The Loft was pretty quiet. Josh Davis – who Paul Hoffman (Greensky’s mandolin player, vocalist, songwriter) called the greatest songwriter he knows – took the stage with just a few guitars perched behind him. He completely engaged the crowd and got them excited about Greensky coming up. He also played a song he wrote that will stick with me called “The Ghost of Richard Manuel”. Speaking with him after the set, it turns out Davis is a huge fan of The Band. Richard Manuel – piano player, singer, songwriter – was an important part of the Band’s mix, and the song was a highlight for me.

Once they took the stage, Greensky Bluegrass moved through a solid set of originals and covers, breaking out Talking Head’s “Road to Nowhere”, The Beatles “Help”, and Bob Marley’s “Small Axe” (my personal favorite of the night). They played some tracks from their latest album, Handguns, and a few off their earlier recordings, too. Occasionally, the band would move relatively quickly through a given song. More often, they took some time exploring the outer edges of the song, with some focus on Paul Hoffman’s mandolin soloing and Anders Beck‘s trippy dobro playing.

The light show was impressive, too. I hadn’t seen them include that before, and it was a fairly sophisticated digital set up. You can see it in the photos from the show. The same streams of light from their digital lighting doodads contained multiple colors, projecting light around the venue in unison with the music. During the show I was lucky enough to meet Buddy, Greensky’s light guy, who has been working with the band for years. He seemed to have a strong rapport with the guys in the band, and I thought that was reflected in the light show.

These guys, it seems to me, grew up listening to Led Zeppelin, Neil Young, Grateful Dead, Bob Dylan, U2, Talking Heads, etc. Yes, they’re a bluegrass band, but they’re a bluegrass band put together by musicians with a solid footing in good old rock n’ roll. You can hear it in their originals, and their cover choices, which reflect the tastes of people growing up in the 80s and 90s, as opposed to, say, the Grateful Dead, whose covers are mostly older blues, folk, and country tunes. Stuff they heard when they were growing up.

If you go over to the Greensky Bluegrass page on the Live Music Archive and give a few shows a listen, you’ll see what I mean. You might even start by checking out the recording for their sold out show at Bell’s Brewery, which was almost exclusively covers. This is all thanks to the intrepid show tapers out there. At The Loft, I met Craig Hanger, who was taping this particular show. He’s a plumber by day, and a fearless taper by night. He tapes shows with a sophisticated set up. Four microphones mounted on an adjustable pole (gotta get above the crowd), and some sort of supercomputer in a big bag that looks like an over-sized lunch cooler. The evolution of portable taping equipment is amazing. With a not insignificant investment in equipment, though, and a commitment to the work required to convert raw recordings into something mere mortals can consume – MP3s, FLAC – anyone could do it. Which is one of the things I like about taping. With some dedication, anyone can help spread their love of music to others over the digital airwaves.

If you haven’t seen Greensky Bluegrass yet this year, don’t worry. You will have lots of opportunity this summer. In addition to a variety of other gigs, they will be playing both the Summer Camp and All Good music festivals, which GLONO will be covering this year. Stay tuned. And go see Greensky Bluegrass when you can.

2 thoughts on “Greensky Bluegrass at The Loft”