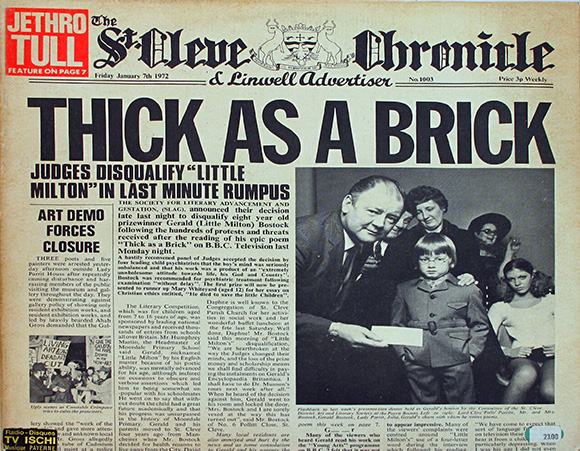 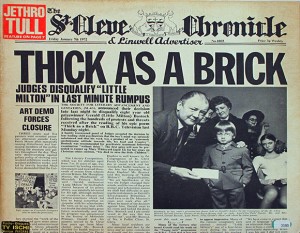 It was a task that was easily avoided, this decision to review Jethro Tull’s Thick As A Brick on the sheer fact that I wasn’t quick enough with my hand to review the sequel.

In retrospect, I should have started with the original anyway. I really had no business to jump ahead in line and taint my first foray into Brick without doing the heavy lifting of listening to the original album’s lone song, split into two twenty minute sections that must have been too massive for me to consider previously.

Aside from being familiar with the refrain of Thick As A Brick’s introductory notes, my only other experience had been reading the mock newspaper cover art from someone else’s record collection. The kid on the cover looked like Cousin Oliver, but I had no idea that inside this long player was a haphazard concept record about a fictional kid named Gerald Bostock.

I began with the intention of learning all about this character, but a few miles of interstate driving as I took the kids to an area museum proved to be too intense for me to follow along with the album’s insidious plot. With the kids knee deep in some shitty Chipmunks movie in the back seat of the mini-van and my wife consumed in her Kindle, it was just me and Ian Anderson’s heavy mettle for an hour-long drive.

By the end of side one, it was me that was asking, “Are we there yet?”

Let me be square with you about the girth of Thick As A Brick and my relationship with the band in general. Even though I wasn’t familiar with the record prior to this review, I am very familiar with the record’s follow up release, A Passion Play. For reasons not entirely clear, A Passion Play was a recurring favorite as a kid, and that record too is a hefty one-song album, with a brief interlude in between side A and B that plays like an A.A. Milne children’s story.

What I’m saying is that I’m not intimidated by the idea of the long song format and I understand why this band is often used as the punch line to any serious music snob. It’s completely logical that the mere suggestion of a band presenting an album-length song to its audience reeks of complete pretension.

And if creating not one, but two sequential records that both use this kind of arrangement  doesn’t confirm this perception, then consider that it’s performed by a group of hairy British dudes that look like they’ve rolled right out of the Middle Ages, or the local Medieval Times performance staff.

What I don’t get is how much work they put into it. This is not easy stuff to learn and play, and as a result, not an easy thing to appreciate in the open-air acoustics of a Japanese minivan Sienna.

No, progressive rock is best heard within the independence of headphones or earbuds. They put the massive schlock into perspective, and they do the good deed of sparing others from the nerdy glee of impossible soloing, pointless tempo changes, and frequent measures of flute accents.

There is plenty of all three of these throughout Thick As A Brick, which begins to reveal itself as being culled from bits of random parts that may have started life with other song titles. It’s here where Ian Anderson’s first words of “Really don’t mind if you sit this one out” begin to serve as a warning to anyone who isn’t down with the notion of stringing bits and pieces of short segments into one horrifically long piece.

I soldiered on until I began to discover that there’s less pretense in Tull’s intent and more wry English humor instead. If you take the origin of the album as gospel, you’d believe that the album itself is nothing more than a fuck-you to music critics who kept telling them that they were a progressive rock band, no matter how hard the band’s creative forces spoke to the contrary.

Once you’re in on the joke of Brick the more enjoyable it becomes.

It was there in my basement, secluded with those aforementioned headphones and a second playing of Thick As A Brick when I first began to appreciate its awesomeness of its grandeur.

The new setup did nothing to help figure out how the story of Gerald Bostock’s poem, but the incredible musicianship on display throughout the record’s total time created an environment where I didn’t miss the story arc one bit.

I’m still giving the nod to Passion Play, as it seems to throw caution to the wind a bit more with even more complex arrangements and such inexcusable lyrics like “And your little sister’s immaculate virginity wings away on the bony shoulder of a young horse named George.”

Thick As A Brick is Tull’s coy tiptoe into the progressive realm compared to Passion Play, but it is a bold move forward nonetheless. And if they can be scolded for working on rock music’s outer margins, can’t they be forgiven for bringing such challenging ideas to paper to begin with?

Personal favorites aside, Thick As A Brick plays like nothing you’ve heard before or since. It’s easy to understand why devotees often refer to it as the band’s crowning achievement and why its excess isn’t palatable with some listeners.

What isn’t so easy to understand is how such bold arrangements and ideas that tested the boundaries of their own creativity as well as the very notion of what constituted rock music could disintegrate into such lazy output like A or Under Wraps later on.

And it certainly doesn’t point to the need to even attempt a sequel, particularly when they crammed so much into one tune that the original l.p. couldn’t even support a second song.

2 thoughts on “Jethro Tull – Thick As A Brick”