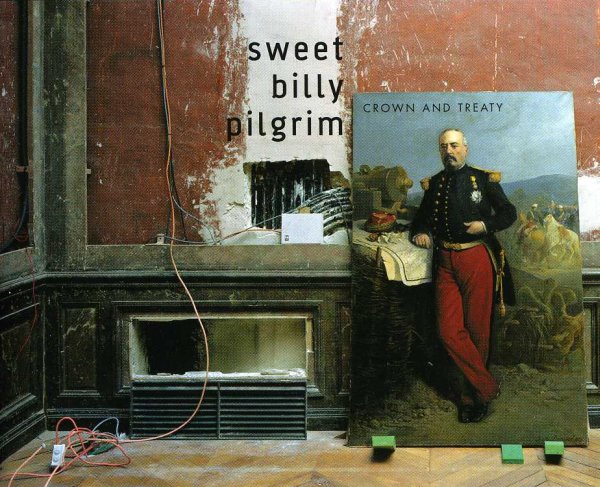 Occasionally, an album arrives and upon first listen you get the sense that the music jumping out of the grooves wasn’t created in a sterile studio with too little daylight and too much attention to detail. With Sweet Billy Pilgrim’s third release, Crown and Treaty, you get the sense that the recording studio is nothing more than a few rooms in a house with wires littering the floor and dirty dishes piling up in the kitchen sink.

Fuck those chores, particularly if the end results command a record as eloquently crafted as this. Crown and Treaty doesn’t suffer from any poor fidelity sonics resulting from this homespun approach. It’s as detailed as anything as you’d expect from a band with a recording budget that matches the muse that they’ve set out to scale. This muse is in full, beautiful array throughout Crown and Treaty, in what is certainly one of the best albums that you’ll hear all year.

Crown and Treaty incorporates delicate organic instrumentation (clean guitars, banjos, pianos, whatever’s lying around) with some great harmonies, initiated by Tim Elsenburg’s gentle voice. With the recent addition of Jana Carpenter to the fold, Sweet Billy Pilgrim has now found a wider range of vocal emotion, which only begins to take off during the album’s second half.

Prior to those moments, Crown and Treaty offers a wide range of expression through its original arrangements and Elsenburg’s own imaginative lyrics.  There’s a sense of maturity throughout his study on melancholia, suggesting that the existential crisis that we all experience is preordained from day one. Or, as Elsenburg himself details more succinctly in one track, “Life is a place we arrive at upside down.”

If it’s not his own demons he’s documenting, he uses other source material for the task. “Kracklite” appends Brian Dennehy’s character in the 1987 The Belly of an Architect and uses it as a discussion of the folly of trying to overcome our own mortality. “Monuments we build  tumble to the ground,” Elsenburg sings, accurately pointing out that even the most majestic of structures we place on this earth are “just another way to be forgotten.”

With Crown and Treaty, Sweet Billy Pilgrim have delivered their homespun masterstroke, an album that only begs the question of what other gems do they have hidden in their house of creativity and enviable sense of arrangements. Here’s hoping that this musical monument never gets forgotten.