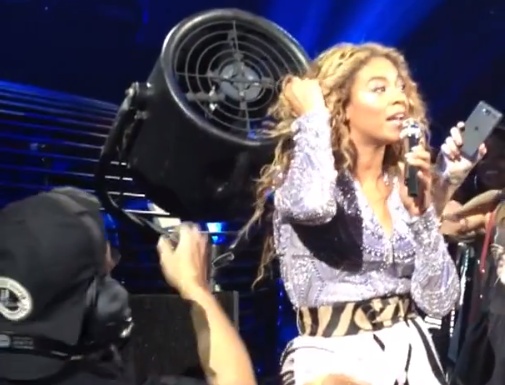 If there ever was an argument for the superiority of Dyson products, it was made earlier this week in Montreal at the Bell Centre when Beyoncé had her hair tangled in a fan. Had there been a Dyson Air Multiplier on stage rather than a thing with whirling blades, hair stylists everywhere wouldn’t have had a heart-in-the-throat moment. Still, credit must be given to the stalwart performer, who kept on keeping on, singing “Halo,” tonsorial issues notwithstanding.

There must be something about performers, hair, and a contract with Pepsi. Who can forget Michael Jackson in 1984, when his hair caught on fire during the third take of a Pepsi commercial? In Beyonce’s Pepsi spot, there are shattered mirrors, but no fireworks.

(Was Beyoncé’s hair mishap an accident. . .or something else of a more spectral variety, a thriller, as it were?)

While people might think that the life of a musician is all limos and lager, living life large, performing can be deadly. Like the case of Les Harvey, of Stone the Crows, who was electrocuted by a microphone in 1972. Or Johnny ‘Guitar’ Watson who had a fatal gripper on stage in 1996, as did Miriam Makeba in 2008. And there are more who gave up their lives so we could be entertained.

Make no mistake: Performing can be hazardous to your health. Of course, if you’re a musician and not performing, it can be equally untoward (cf: Jimi Hendrix, Kurt Cobain, Brian Jones, Janis Joplin, Jim Morrison. . . .).

One thought on “Why You Should Respect Performers”