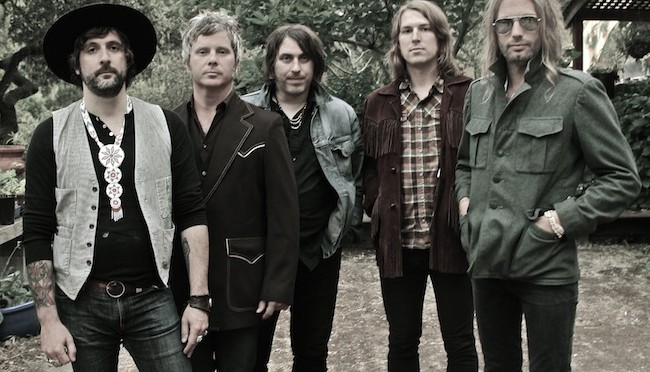 GLONO: I saw you in Chicago about ten years ago and then we did a quick interview so this is our long-awaited follow-up.

Scott Vitt: I think I remember that. We were on tour with the Jonestown. We were doing our country bit at the time. I remember you guys were really nice to us. Not a lot of people were very supportive or  even got what we were doing but you guys always said nice things.

Vitt: Yeah, we all are. We’re in Northern California, north of San Francisco. One of the guys grew up out here and we always wondered what he was doing in Philadelphia. He decided he wanted to be back here–he’s a surfer and wanted to be closer to the ocean and everything–and so we decided to come out and stake our own claim, so here we are.

GLONO: I feel like you guys have always had a bit of that California vibe anyways. Are you finding that you fit in well there?

Vitt: Absolutely, I couldn’t agree more. That’s been our thing for a long time. Back even when we were doing that country thing. We’ve always been fascinated with the Byrds and that whole thing and we always wondered why we didn’t live out here so we finally just did it.

GLONO: Do you miss Philadelphia?

Vitt: Yeah, I mean we miss our families and our oldest friends. I was raised in Philadelphia and the east coast so of course I miss my folks and my close friends who are still there, but I don’t miss the physical place at all. Regretfully.

You know, it’s just a harder place to live and overall people are happier out here: we have the forest and the ocean and all of that is inspiring.

GLONO: Well California and the west coast has always had such an influence on that sound, that vibe. Are you finding other creative outlets from that besides the music?

Vitt: Not as much as musically speaking. I mean, professionally, yeah. I’m an architect as well so I get something from the creativity out here. But I mean, artistically I’m just inspired and finding that I am writing more and drawing more, which I haven’t done in a long time. All of things that I had kind of lost touch with and am now reclaiming.

People are a lot more into what they do, even for a living here. It’s less traditional, I guess. On the east coast people seem to just do their day jobs and that’s kind of it. Out here people almost seem to have more to live for. I hope that doesn’t come off negatively, it’s just that it’s a different vibe.

GLONO: The west coast has always had that draw for people. That’s the myth.

Vitt: Yeah, man. It’s where you go to strike gold!

Vitt: Exactly. Whether figuratively or literally it’s where people go to find their dreams.

GLONO: Let’s talk about the new record. You guys have been at it for a while now. What keeps you inspired?

Vitt: Well, the natural surroundings, but we have a pretty solid unit where we all bring in ideas and different influences but we’re all on the same page. You know, we’ve been doing this a few years and personally we’re a little older and so any bullshit is behind us. So we never have a problem writing songs and we’re really at a point where we’re in this for ourselves. There are no preconceived notions about what this band is going to be.

You know, frankly, playing psychedelic music, we never got into it to make a career out of it. That’s stupid, frankly.

GLONO: It’s not exactly the mainstream.

Vitt: Exactly. You know people who are into it for that–and I don’t want to be a dick about it–but I don’t think they’re playing psychedelic music. And there are some out there who, I don’t know what they’re doing. Maybe that’s a genre unto itself, but psychedelic music was never meant for the masses. It’s a lifestyle. To be honest with ya, it’s about the drugs that are related to that…a cultural aspect to it, being anti-establishment…and this other stuff isn’t that.

GLONO: Well, there are now some pretty big psych festivals out there. Did you ever expect to see that?

Vitt: Not in a million years, man. We’ve been going to the Austin Psych Fest basically every other year, but as the years progressed the bill was getting less and less psychedelic and it’s a little more about what bands they can get on the bill, which is a little disheartening. We have an opportunity to really push what psychedelic music is and we seem to be going the other direction.

GLONO: Do you find that’s true of the European festivals too?

Vitt: No, I don’t. We’re leaving a week from today actually to go play some psychedelic festivals, and a lot of them seem to be sticking to a more stylized form and not straying too far. But you know, the Austin Psych Fest is the template everyone wants to follow because they do a great job with it. And I don’t want to complain, because it’s a great opportunity for a band like ours to get in front of those crowds. We can go there and play to hundreds and hundreds of people and all of those people came there. If we went to their towns we’d be playing to five of them. So it’s good for bands like us who are trying to do something a little off-center.

GLONO: We have friends who have gone over to play some of the garage rock festivals and it seems like the European festivals try to keep more pure to the genre. I think it’s just an extension of European’s fascination with American pop culture.

Vitt: And that’s nothing new. The Brits and Europeans seem to always do what the Americans did…but better. All the way back to the Stones!

I’m coming off sounding so negative and I don’t want to do that. It’s just that we’ve been doing it a long time and have seen some things.

GLONO: Would you like to say something super positive?

Vitt: Ha! Hey, man, the positive side is that more and more people are getting into psychedelic music so I’m cool with that! A lot of the bands we were influenced by took 40 years to be discovered, you know through the Internet. So some of things that killed music saved it for bands like us. So the positive side is we might not have to wait as long!

GLONO: What are you looking most forward to in Europe?

Vitt: The best thing and the reason we’ve been together this long is that we’re friends, man. And the best things about being on the road, especially in places like Europe is that we get to enjoy each other’s company and laugh. It’s fucking boys time! And we laugh a lot and we party a lot and the reward is that we then go on stage and play music, which is a lot better than going to work! And when you’re playing Europe, you’re looking out the window and seeing the countryside of France instead of New Jersey.

GLONO: You’re covering a lot of ground in a short time.

Vitt: It’s going to be intense, but that’s by design. Every night we have off we’re in the bar spending money instead of making it.

The Asteroid No. 4 – Tour Dates

One thought on “12 Year Itch: Glorious Noise Interview with The Asteroid No. 4”