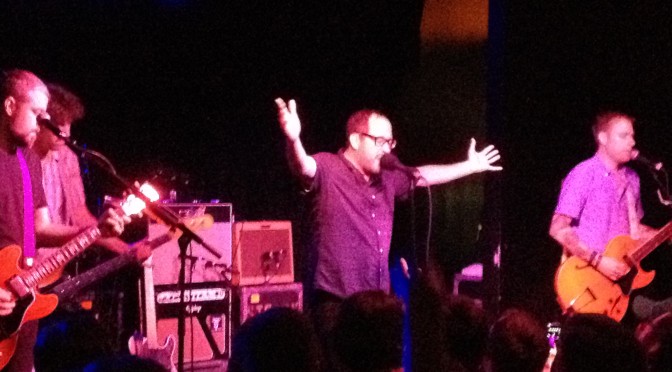 Let this be my annual reminder: I need to get out to more shows. It’s easy to forget what a transformative experience a tight band in a small club can create. Craig Finn knows this. He exudes pure joy on stage. The crowd internalizes this joy and amplifies it back to the stage, generating a loop of enthusiasm that increases exponentially until we all explode in a blast of fist pumps and cheers and raised tallboys of PBR.

At least they were last night at the Pyramid Scheme in Grand Rapids. The venue has a capacity of 420 and even though the show wasn’t sold out it seemed pretty full. This was at least my fourth time seeing this band but the previous times had all been at big outdoor fests (Lolla 2006, 2007, and one or more Pitchfork). But these guys need to be seen in a bar.

And the Pyramid Scheme is a good bar. Maybe he says this to everybody, but Finn seemed to think so too. He mentioned what a great venue it was on multiple occasions, even tweeted it later. I think demographically Grand Rapids is similar to Minneapolis. I hated this town when I was young and couldn’t wait to get the hell out. I moved to Chicago and never thought I’d come back. But Grand Rapids changed while I was gone and has gotten a lot cooler with a downtown where people actually walk around…even at night! There are good restaurants and great bars.

I changed too. Had a kid. Turned 40. And I’m back in my hometown but I no longer hate it. Sometimes it’s a bummer that most bands pass us by on the way to Chicago. National touring bands usually skip Michigan altogether, but if they’re hitting secondary markets they play around Detroit, which is all the way across the state. When you live in a tertiary market you know that when a band comes through you have to go see them because you might never again another chance. When you live in Chicago you skip shows all the time because you know they’ll be back in a few months. Or on their next album cycle at the latest.

But when a good band plays Grand Rapids, you can’t miss it. I remember back in the 90s Maureen Tucker played the old Intersection. She had Sterling Morrison in her band, so we were seeing half of the original Velvet Underground! Less than 100 people showed up.

These days the Hold Steady can pull in almost 400 people on Wednesday night. And people were into it. How can you not be? So many of the songs are explicitly about how great it is to be out having fun rocking out to noisy bands.

Craig Finn understands that music is our religion. He is a charismatic minister whose faith is contagious. The rock club is our sanctuary and it’s important to gather together in communion with fellow believers. In real life. To drink and sweat and jump around with pals and strangers. Once in a while at least.

After the show we saw Finn walking by himself out to the tour bus. I shouted “Great show!” as we passed by. He looked up and said “Thanks” and fumbled with the locked door.

2 thoughts on “My Annual Reminder: The Hold Steady in Grand Rapids”