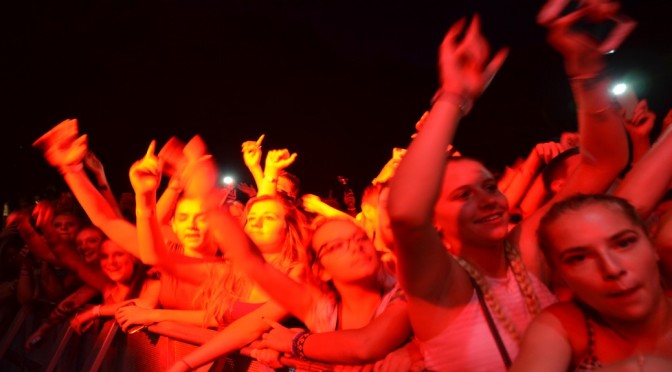 Remember when Lollapalooza was alternative?

You’re forgiven if you don’t. They gave up on that idea by 1996 when they first booked Metallica as a headliner.

Just in Chicago if you attended Lolla, Pitchfork, and Riot Fest, you’d have the opportunity to see pretty much every band who’s currently touring. Sad you missed missed Run the Jewels and Courtney Barnett at Lolla last year? They both played P4k this year. Chances are they’ll both have a nice big font on the Riot Fest 2016 poster.

It’s quite a time to be a music fan. Then again you might ask yourself whether an outdoor music fest is the best way to experience live music. There are certainly a lot of hassles at these kinds of fests (comfort, sound, food, toilets, and on and on). But if you’re the type of person who likes to make a notch in your belt for every band you see, festivals can help you out with that.

I’ve always enjoyed Lollapalooza. It’s fun to enter into the mayhem for one weekend per year. For me, the fun has always outweighed the hassles. Then again I also don’t mind going to IKEA once in a while. Your mileage may vary.

Surprises were Alabama Shakes (way more fun than I expected), Metallica (ditto), and Twin Peaks (I had avoided them because of their dumb name but they’re exactly the kind of band I love).

Disappointments were Father John Misty (grumpy), Lame Impala (I think I stole that joke from Twitter), Albert Hammond, Jr (sang like the guy from Midnight Oil), and the disappearance of the falafel vendor who kept me alive for the past seven or eight Lollas.

Paul McCartney seemed like a big “get” for Lollapalooza. I know people who bought Friday passes just to see his show. Paul played Bonnaroo in 2013 and Coachella in 2009, so this kind of thing is no big deal to Paul who was able to easily connect with the vast, multi-generational crowd of “Lollapaloozans,” as he referred to us.

His set started off a little shaky with a dumb intro video and a very wobbly opener of “Magical Mystery Tour.” He followed that with a terrible new song called “Save Us.” A few classics started to build some momentum, which he squelched by playing another terrible new song, “My Valentine.” I got nervous, wondering if Paul had lost it. But after that there were no missteps. “Maybe I’m Amazed” was amazing, and when he played a short “FourFiveSeconds” (his first Top 10 hit in 29 years!), he had the crowd in the palm of his hand. And it just kept getting better and better. His solo acoustic set was touching. His griping about the bass bleed coming from “the disco” across the park was charming. By the time he blew up the pyro and fireworks in “Live and Let Die” I was thinking this was the best concert I’d ever seen. The crowd was going nuts. Grandparents, children, moms, bros, everybody was totally into it. Dancing, singing along, whooping it up.

The evacuation on Sunday was handled a lot better than in 2012. They actually let people know about the underground parking garage shelter areas this year, unlike in 2012 when they just lied to the press about it afterwards. But I didn’t need shelter because I got out quick and got a bar recommendation from a helpful Chicago cop. Flo & Santos on Wabash would’ve been a hike had we been on the north side of the park, but we were already on the south side for poor little George Ezra whose set got screwed the most after they let us all back in an hour later. They pushed out the rearranged schedule to users of the #lolla app, but you only received the update if you had a solid connection, which nobody does. I had to carry my man AMP’s phone to the media tent’s wi-fi so his app could update.

I’ve been bitching about this since I was using a RAZR but Lollapalooza really needs to figure out a way to provide expanded cellular network capacity to its attendees. Especially since they require the app to relay important information. It’s possible for the Super Bowl, so why not Lollapalooza? Hook us up.

Am I becoming a hippy in my old age, or is it just harder to actively hate bands as you mature? When I found out that the headliners for Saturday were Sam Smith and Metallica I figured I’d just split early that night and maybe get some decent food and a good night’s sleep. I have no interest in Metallica. I hated them throughout the 90s and only in retrospect managed to gain some appreciation for Kill ’em All. I hated them for their Nutty McShithead opposition to Napster. I hated them for making a “therapy documentary” and for their role in the Loudness War. But you know how it is. It’s Lollapalooza. You’re there. You’re grabbing some Anheuser-Busch “craft” beers next to Perry’s stage, checking out some Carnage, and it’s like, you don’t want to just go home… And you’re obviously not going to watch Sam fucking Smith… So yeah, let’s just check out a couple minutes of Metallica. And the next thing you know, you’re realizing what an uptight little dick you’ve been for the past 30 years and it becomes crystal clear that Metallica is a great fucking band! (Or a great “ducking” band, as your iPhone will autocorrect your text to your pal who has loved Metallica all along.) James Hetfield is an awesome frontman, totally charming and gracious but still sincere and 100% metal. I still might not consider myself a fan, but I’d definitely cross the street to see them again if I get the chance.

One interesting thing this year (if you’re a nerd who cares about such things) is that all of the main stages except Perry’s were once again named for big sponsors for the first time since 2012. The worst year for Lolla’s stage name sales department was 2013 when Sony and Google pulled out and we were left with unsponsored stages named “Lake Shore” and “The Grove” and “Petrillo.” Since 2013 the Petrillo band shell has been Palladia (a TV network apparently) and the Kidz stage has been “presented by” Lifeway (dairy products). But this year the Lake Shore stage was named for Sprint and my beloved Grove stage became Pepsi. So maybe ticket prices won’t go up next year. Ha ha.