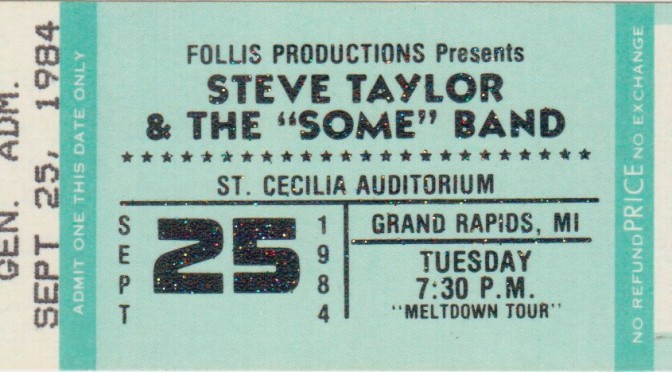 It was a bold move to invite pals from school to a Christian rock concert. Although I had accepted Jesus into my heart as my personal savior a few years before and I knew it was my obligation to spread the gospel, I had kept my faith pretty much to myself at school. I felt a lot of guilt about this because I knew that if I was ashamed of being a Christian, the Son of Man will be ashamed of me when he comes in his Father’s glory (Mark 8:38).

But I was in junior high. And in junior high you never want to stand out from the crowd. It’s all about fitting in and not rocking the boat.

I have no recollection of how I invited these two friends to the concert. I must’ve warned them that Steve Taylor was a Christian rock singer. Did I play them the Meltdown tape at my house beforehand? Who knows. But photographic evidence proves we all stuck around after the show and met the band, and we’re all smiling, so they must have had a pretty good time.

I know I did. I loved Steve Taylor.

He made a huge impact on my life. Before I discovered his music, I thought all Christian music sounded like Kenneth Copeland. Seriously, my mom had that Kenneth Copeland tape and played it nonstop. It sucked. My mom and I had struggled about music since my dad died and we became born again. This was the dawn of MTV, which my mom cancelled from our cable that summer after I flipped out and thrashed around my room screaming Twisted Sister’s “We’re Not Gonna Take It.” I didn’t realize the cable company could turn off one channel, but they did.

The only secular music my mom and I enjoyed together at that point was Michael Jackson. Thriller, of course, had broken down all barriers and there weren’t very many people on the planet who could resist MJ’s charms. Not even my mom, who was very concerned about my eternal well-being. She didn’t see much value in most of the music I was taping off the radio on my Hitachi boombox, and she’d often remind me: garbage in, garbage out. I felt a lot of guilt for not being a good enough Christian, for having impure thoughts, for being a disrespectful son, for acting different around my school friends than how I acted with my church friends…

It was 1984. I was 13 years old. And I was flailing to figure out who I was. Steve Taylor helped me establish a role for myself within the context of our evangelical church. It was okay to question authority. After all, that’s what Jesus did (Matthew 23). It was okay to be snotty when faced with hypocrisy. And there is nothing teenagers love more than pointing out other people’s hypocrisy.

He also gave me a language that I could use to rebel. Any time my mom or the youth group leaders tried to point out things that weren’t really appropriate or modest or whatever, I could throw it back to them that they were just trying to make me into a clone. (“I Want to Be a Clone” is the satirical title track of Taylor’s first EP in which he skewers believers who attempt to force followers into speaking “Christianese” and turning the church into “an assembly line” where you can “kiss conviction goodnight.”)

Other targets of Taylor’s vitriol included racism (“We Don’t Need No Color Code”), self-importance (“Meltdown at Madame Toussaud’s,” “Am I In Sync?”), self-righteousness (“Guilty By Association”), and human rights violations (“Over My Dead Body”). That said, Taylor was not a liberal. He expressed strong anti-abortion views and challenged any theological interpretation that accepted homosexuality (“Whatever Happened to Sin”, “Bad Rap”). Today this bums me out, but at the time I didn’t know any better.

But this wasn’t preachy church music. It was New Wave. And its attitude was punk. At least to me it was. In concert, Taylor wore two different colored Chuck Taylor high tops; this was the most radical fashion statement I’d ever seen. His drummer had blue hair and a safety pin through his septum. His name was Pteryl. With a P! He was the coolest person I had ever seen in my life. *

Our seats were close enough that I could see spit and sweat flying off Taylor’s face as he sang and danced. I was in awe.

At the end of the show there was the obligatory altar call. Nothing high pressure, but if you wanted to talk to somebody about accepting Jesus into your heart as your personal savior, there were people up front in the aisles who would be happy to pray with you. Neither of my pals went up. I can’t remember if I felt relieved or disappointed about that. But we stuck around and talked to the band, which was cool.

I bought a T-shirt. It had “CHOOSE LIFE” in big letters and I wore it to school the next day. “Wake Me Up Before You Go-Go” was the #1 song in the country for the third straight week. A girl I liked named Darcey was super impressed and wanted to know where I got my shirt.

“No, somebody else…” I was too embarrassed to admit it was a Christian rock concert. Which caused me a lot of guilt. Mark 8:38, you know.

After staying out of the spotlight since 1995 Steve Taylor came back last year with a new band (The Perfect Foil) and a new album (Goliath). He’s still pretty cool.

* Correction: I recently discovered the drummer was Terl Bryant, who has since told me that he never spelled his name with a P, nor did he ever have his nose pierced. No idea where I came up with those memories… ^