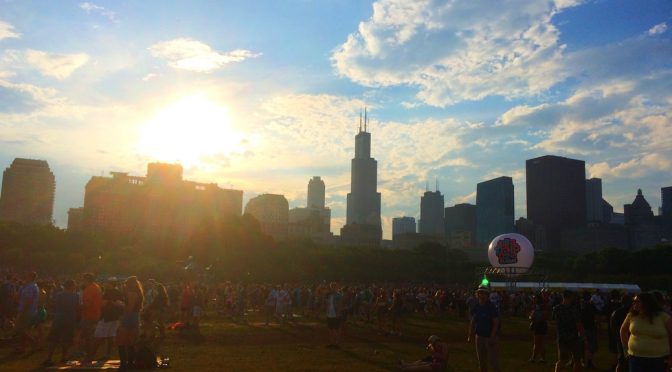 It takes a lot to freak us out these days. And we certainly don’t expect to see anything genuinely disturbing at a summer music festival.

This year Lolla expanded to four days with 175 artists. The slogan of Lollapalooza in its original touring incarnation was “Take the whole day off,” but now they’re expecting grownups to take off both Thursday and Friday? That’s ridiculous. Then again, passes sold out immediately just like they always do, so what do I know?

Well, one thing I know is that with 175 artists there ought to always be something great happening on at least one of the seven stages. Unfortunately, that wasn’t the case. More is not always more.

I couldn’t make it for Thursday. I was disappointed to have to miss Kurt Vile and the Last Shadow Puppets, especially since they were in the top of my “must see” list. But one of the mantras to survive a big fest is to remind yourself that you don’t need to do everything.

On Friday it started to rain as soon as we got inside the park. Looking at the radar revealed a big storm hovering to the west, but the magic of Lake Michigan kept breaking it up as it approached Chicago. No lightning, just drizzling piss. We were waiting out the weather under the media tent, listening to the Struts and then M0, but you can only do that for so long before you need a beer, so we ponchoed up in time to see the Foals.

The sun eventually came out and the ponchos came off and we listened to some Frightened Rabbit and ate some Wow Bao. I still miss my falafel vendor but there seemed to be a lot of good food options, including Harold’s Chicken. I’m not sure if the organizers have finally figured things out or what, but the logistics of the park seemed to really work well for once. The thru-ways never felt soul-crushingly crowded, and the little off-the-beaten-path areas felt useful and pleasant.

With nothing much we needed to see on the north side of the park that night we decided to lay down a blanket and camp out on the south side. M83 and Miike Snow provided background music to hanging out with pals and eating ice cream while we waited for Radiohead.

I rarely listen to Radiohead but they’re a riveting live band. Way more engaging than their albums. In 2008, Lollapalooza didn’t schedule any other headliners to play against Radiohead so pretty much all 75,000 attendees packed onto Hutchinson Field. This year Radiohead was scheduled up against Major Lazer, Martin Garrix, and Ghost, so even though now each day of the fest draws 100,000 lunatics, there weren’t nearly as many people as last time.

We cut out early to catch some of Ghost’s set at the Pepsi stage (formerly the Grove). I love that stage because you can always get nice and close. We walked right up front to see the band who looks like Lucifer but sounds like Ratt. If this is the face of modern Satanism I don’t think anybody has anything to worry about. The devil, apparently, was a theater major.

Saturday was sunny and we spent a lot more time roaming around the park. Again I was impressed with the improvements in the layout over the years. There wasn’t nearly as much sound bleed from stage to stage, you never had to walk very far to find a beer or a portapotty, and the food lines were manageable. I hardly spent any time waiting in line for anything.

The fashion was hilarious as usual. Young girls love their high-waisted jean shorts hiked up high enough for maximum butt cheek visibility. Lots of crop tops, halters, and sports bras. And all the girls were sporting french braids; my wife tells me that’s a Kardashianism. Bro style hasn’t seen much evolution: basketball jerseys, cargo shorts, CamelBaks, and baseball caps. Lots of girls wearing basketball jerseys as dresses too. I noticed all those kids were pretty much sticking exclusively to the dance music sets. If there was a guitar on the stage, you wouldn’t see any butt cheeks in the crowd. You’d see a bunch of oldsters who all looked like me: distressed t-shirts, respectable shorts, comfy shoes, receding hairlines. The women wore nice sundresses and Chuck Taylors. I read that 74% of the Lolla crowd is under 35. The remaining 26% of us still like guitar music.

Most of my favorite sets this year were from guitar bands. I watched Potty Mouth and the Joy Formidable back to back on Saturday and was blown away at how cool and fresh they made it seem to rock out. My favorite set of the whole weekend was FIDLAR on Sunday with their bratty batch of punk songs about getting all fucked up. Maybe EDM has peaked? If it has, then nobody has told the throngs of kids covered in glitter at Perry’s stage. But for the first time — for me, at least — that scene didn’t seem as energetic and exuberant as it used to. Every time I walked by, it sounded like the same old bass dropping cliche. I realize I sound like an old man but I don’t think I’m totally wrong either. (Perry agrees.)

One non-guitar band I loved however was Big Grams. Phantogram’s Sarah Barthel and Big Boi were having a blast together on stage and their joy was infectious.

I’ve told the story about the last time Jane’s Addiction played Lollapalooza in 2009. We had to leave in the middle to rescue a scared little boy after his drugged up dad passed out next to us. I still wonder what became of poor Reuben. He’s probably 13 now.

Anyway, I was looking forward to a full Jane’s Lolla set. Especially since they were playing the whole Ritual de lo Habitual album. I still remember the first time I heard that album. It was in my man AMP’s dorm room in Hoben Hall in Kalamazoo. He had the best stereo of anybody I knew and he was always taking you up to his room to make you listen to something he thought you needed to hear. Sometimes it was something terrible like “Silent Lucidity” or “One” but this time it was the first song on the brand new album by Jane’s Addiction. AMP cranked up the volume and pushed play and “Stop!” blew me away. The dynamic range in that song between the quiet and loud parts almost made my head explode.

The next summer we’d drive across the state for the Michigan stop on the first Lollapalooza tour in 1991, which Perry Farrell organized and Jane’s headlined. It’s hard to believe that was 25 years ago. Sometimes I feel exactly like that 19 year old kid, and sometimes I feel every single one of the 25 years that have passed since then. Getting old sucks but it beats the alternative. With age comes experience. And experience can lead to grumpy old mannerisms like belittling whatever the youth is into because you think your generation did it first and did it better. We’ve seen it all. Nothing’s shocking.

A group of four young women were standing in front of us during Jane’s Addiction. They were getting into it, especially one who looked like Courtney Barnett. I started thinking about how I might be jaded but this was all new for them. It probably made a big impression on them. They were probably about my age when I went to that first Lollapalooza. They probably weren’t concerned that Perry Farrell is starting to look like Liberace.

After the band played all of Ritual they played a few more hits. During “Ted, Just Admit It” they brought out a couple of women in bondage gear (blindfolded, hands bound). While Perry reminded us that “sex is violent,” roadies appeared to place hooks into the shoulder blades of the two blindfolded women. The hooks were connected to a rigging system that stretched their skin upward. It looked painful. Was that blood trickling down her back? I gasped and covered my eyes for sec. Courtney Barnett turned around and shrieked, “They’re not going to lift her up in the air, are they?”

Perry’s wife came out in her underwear and uncuffed the woman’s hands on our side of the stage. Then she removed her blindfold, and whoop! Up they went! As they ascended, roadies grabbed their legs and swung them out over the crowd. “OH MY GOD!” I yelled as they swung back and forth, kicking their legs and spinning. Smiling like the Manson family. I was shocked. It was shocking. Literally jaw dropping. And we were all freaking out together, horrified by what we were seeing.

It was the most exciting moment of theater I’ve experienced in years. Maybe ever.

Immediately afterwards, I was able to tell myself that these women were just circus folk. They’ve got some kind of implant or something that allows them to be suspended by their skin like this. Later that night I was telling some friends about it and my pal’s 12 year old daughter wasn’t impressed. She had just seen a guy on “America’s Got Talent” pull a car with his nipples. Apparently, nothing’s shocking after all.

Stage name sponsorship update: Whereas last year all eight stages except Perry’s were named for big sponsors for the first time since 2012, this year they lost a couple. The “Palladia” was once again just the Petrillo Bandshell and the “Sprint” stage reverted back to the Lake Shore. 2016 stage names from north to south: Bud Light, Petrillo Bandshell, Pepsi, BMI, Perry’s, Kidzapalooza presented by Lifeway, Lake Shore, and Samsung. 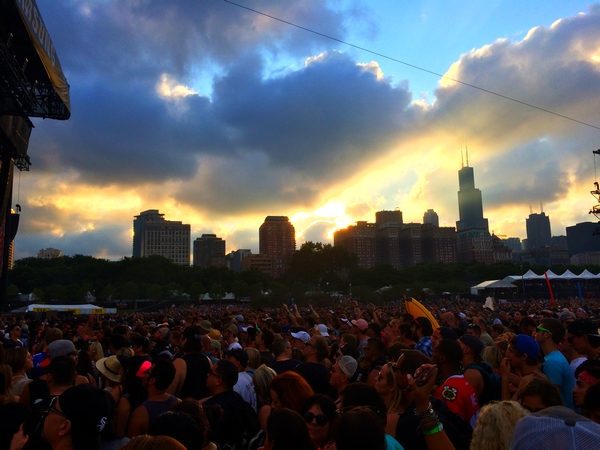