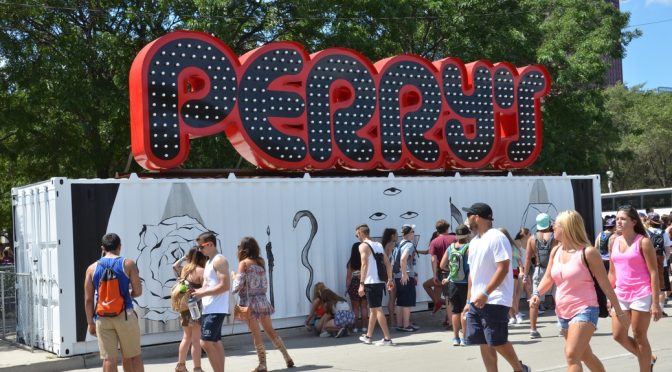 Good old Perry Farrell has changed his tune on EDM at Lollapalooza. Back in 2011 he told USA Today:

“My mission is one day there’ll be live music on one side and electronic music on the other side,” Farrell says. “It looks like the world is really going in that direction where dance music is the new punk rock. I’m going to tell (event producer C3 Presents) next year it should be half and half. So expect it in three years.”

But this year Farrell told the Chicago Tribune:

“When they said they wanted to name a stage after me (when the festival relaunched in 2005), I was honored,” he says. “I like the adulation. But now you say, ‘Perry, what’s going on with your area here?’ Believe me, I’ve got questions myself. I hate EDM. I want to vomit it out of my nostrils. I can’t stand what it did to what I love, which is house music, which was meditative, psychedelic — it took you on a journey. … I sometimes cringe at my own festival.”

I can’t say I disagree. Back in 2011 Perry’s stage was very obviously the most exciting part of Lollapalooza. That was the year I suggested that “Perry’s made the rest of Grant Park feel like a tired twentieth-century throwback to a place where bearded old cavemen rubbed pieces of wood together hoping to make fire.” It was the same in 2012 and 2013, but Perry’s stage has been going downhill since then. I’m no expert on dance music, but maybe it’s just not that cool anymore? I guess we’ll see this weekend…