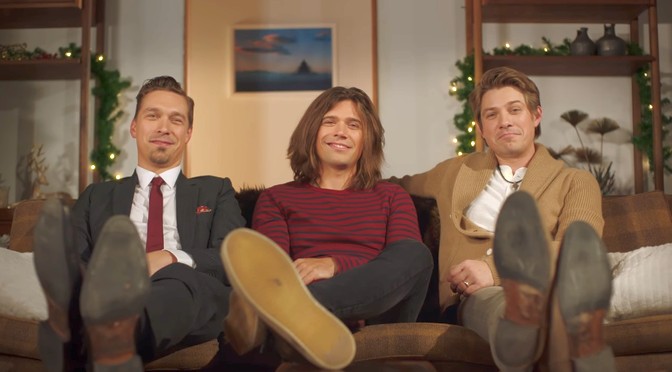 From Finally It’s Christmas, out now on S-Curve Records.

The good old Hanson brothers. Twenty years after the irresistible “MMMBop” broke through and made the Oklahoma teens superstars, they’ve still managed to stick around. Remember the concept of one-hit wonders? Does that even exist today? What about “15 minutes of fame”? Nobody drops off the face of the earth anymore. Once you achieve a certain level of fame in the post-monoculture world, you’re apparently always going to be around.

In the case of Hanson, I’m glad they’re here. They’ve always treated their success with a kind of good-natured bemusement, seemingly aware of the silliness of the hysteria of their peak. They were nice boys and now they seem like nice thirty-somethings. (Yes, even little Zak is 32 now…which might be a little too old to be thrashing around a spray-painted Kurt Cobain bedroom like he does in this video.)

One of the things I love about Christmas music is the formula. It’s like a “Phineas and Ferb” episode: you know the rules, but what makes it interesting is to see how they work them in. Will there be jingle bells in this song? Yes, yes there will.

If you had asked me in 1997 if I’d be listening to and thinking about a new Hanson song in 2017, I’d have scoffed. No matter how talented and charismatic those kids seemed to be, I would have assumed that the industry would just chew them up and spit them out.

Then again, who would have guessed that Donny and Marie Osmond would be still have careers in showbiz?