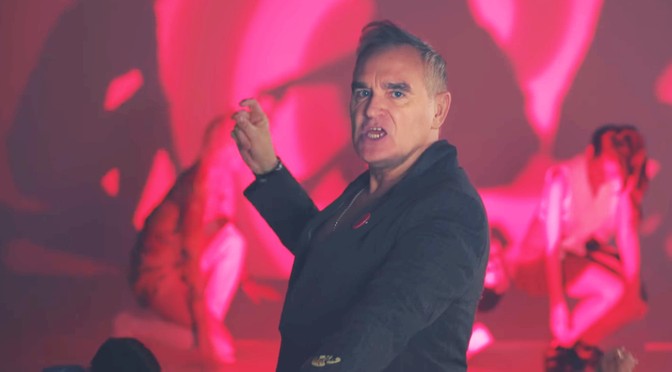 Video: Morrissey – “Jacky’s Only Happy When She’s Up on the Stage”

From Low In High School, out now on BMG.

I always thought Morrissey could easily transition to being an English soap star should he ever decide to give up the music game. I mean, look at him: Can’t you just see him scheming to undercut his rivals with understated but nefarious actions and a whiff of debonair superiority?

Unfortunately, Moz lives in a soap opera and too often undercuts himself with ill-advised comments on everything from Brexit to sexual assault.  Being a Morrissey fan has never been easy.

In his latest video, Moz dances (as much as you can call it that) on what looks like the set of a 80s variety show. Perhaps it’s shot on the soundstage next door to East Enders where he also has a recurring role?

While Moz lacks in the swinging hips department, the songs that have come out from this his 11th solo studio album harken back to his best and earliest solo work from Viva Hate and Your Arsenal. And Goddamn if he doesn’t look great as the leading man in his own TV drama.

I’ll probably skip reading his next interview but I look forward to hearing the rest of this album.