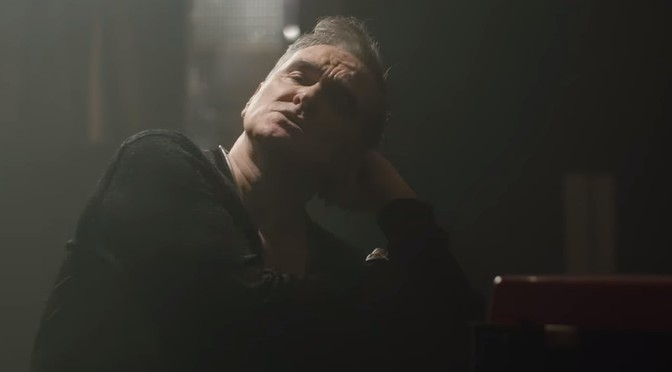 From Low In High School, out November 17 on BMG.

It’s super easy to hate Morrissey. I get it. He says and does a lot of stuff that’s impossible to defend. He applauds Brexit, he cancels tour after tour, he makes you sit through a half hour of YouTube videos before he arrives on stage. And yet…I’ve loved him so long I can’t stop now.

And most people don’t really get his sense of humor. He’s a funny dude. And he’s always aimed his meanest sarcasm at himself. Self-deprecating doesn’t begin to describe it. More like self-lacerating. And it’s hilarious.

“I spent the day in bed; I’m not my type, but I love my bed.” That’s funny. Reminds me of the Tom Waits spiel about taking yourself out on a date, coming home and putting some smooth music on the radio, and by 2:30 in the morning you’ve ended up taking advantage of yourself. Morrissey is more concise.

And you certainly can’t argue with his recommendation to “Stop watching the news.” We’re all burning out on outrage these days and it’s not doing any of us any good to have 24-7 exposure to awful news. Just check in on What The Fuck Just Happened Today? once in a while and keep on keeping on.

As the man says, there’s nothing wrong with being good to yourself.