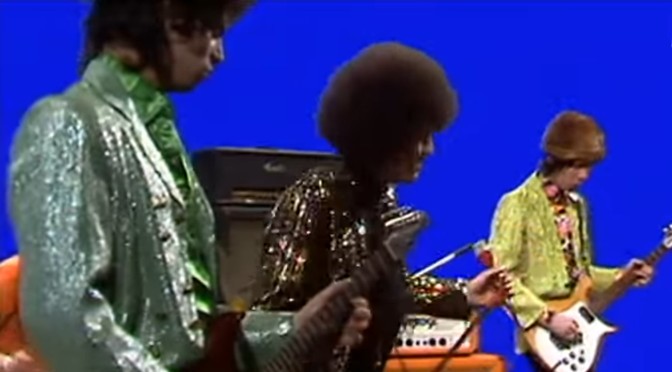 Digging around, I found that Beat-Club has an official YouTube channel where they host a ton of great videos including this alternate take of “Kick Out the Jams” (with Thompson in the black t-shirt). It’s shorter, tighter, more theatrical, and overall just better than the nine-minute version above. It also reveals why they’re playing in front of that blue screen: so the Beat-Club producers can show groovy psychedelic blobs behind them!

You notice that Confederate flag sticker on the bass amp? What’s up with that, right? Leni Sinclair, who took all the best photos of the band, claimed in 2015 that “They were not racist, they were ignorant.” And she publicly burned a photo she took of the band playing in front of a giant rebel flag (as well as a Jolly Rogers pirate flag). I guess it’s important to remember that there wasn’t quite as common a consensus that the Confederate flag was a simple symbol of racism back then as there is today. I mean, nobody thought twice about the General Lee on “The Dukes of Hazzard” every Friday night between 1979 and 1985. Or did they? I didn’t read think pieces back then… But I’m willing to give the Five the benefit of the doubt; they openly endorsed the Black Panthers after all.

By the end of 1972 the band would be broken up for good. There’s not a ton of footage of the MC5 out there, so this is a welcome treat. It’s the best thing I’ve seen since I scored a preview screener of A True Testimonial back in 2004. I’m still hoping (but not super hopeful) that documentary eventually gets released. Because it’s a great story. But until then, enjoy these clips.

And how about Tyner’s sparkly jacket? I’ll never be as hardcore as Rob Tyner. I can’t touch the man. It’s stupid to try. But it’s my quest in life to be as cool as his jacket in this footage.