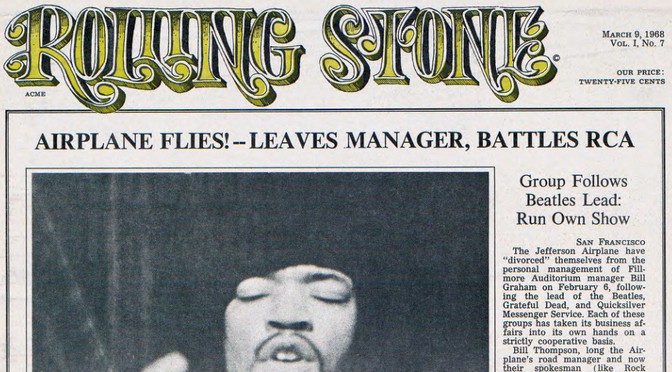 Issue #7 had a cover date of March 9, 1968. 24 pages. 25 cents. This is the final issue with no real “cover of the Rolling Stone” as we know it. These first seven issues were formatted like a regular newspaper with an “above the fold” area containing the logo and a bunch of content: a photo, a headline, and the first few paragraphs of an article or two. Below the fold would be another article or two…or three. Jann Wenner was cramming as much stuff as he could get into those 24 pages.

Full-page ads: Spirit by Spirit on Ode Records, Rotary Connection by the Rotary Connection on Cadet/Concept, History of Rhythm and Blues on Atlantic, Something Else by the Kinks on Reprise, Young Brigham by Ramblin’ Jack Elliott on Reprise, and The 5000 Spirits Or The Layers Of The Onion by the Incredible String Band on Elektra. Plus one for the Billboard Bookshelf, a selection of books “for the musically-minded.”

Record reviews: Something Else by the Kinks on Reprise by James Pomeroy, Young Brigham by Jack Elliott on Reprise by Barry Gifford, Lofty Fake Anagram by The Gary Burton Quartet on RCA (no byline; i.e., Wenner), The Songs of Leonard Cohen by Leonard Cohen on Columbia by Arthur Schmidt, and Mass in F Minor by the Electric Prunes on Reprise by Jim Miller.

Features: Two-page Jimi Hendrix spread by Jann Wenner and photographer Baron Wolman, The Rolling Stone Interview with Ravi Shankar by Sue Clark, and a front page feature about the Jefferson Airplane’s quest for independence. Plus stories about the Charlatans, Albert King, the Maharishi (“He’s Ayn Rand with a Beard”), and filmmaker Bruce Conner. 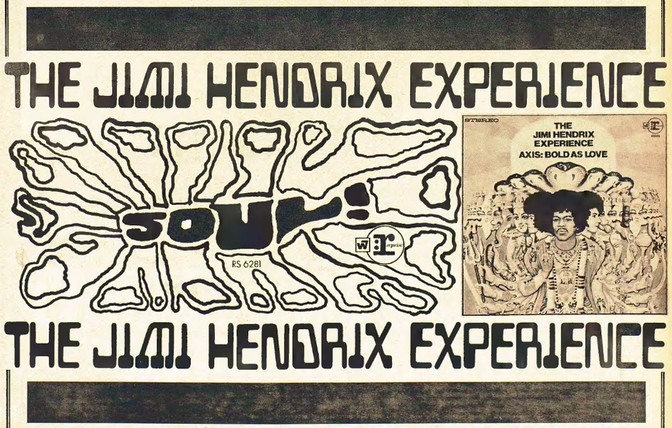 There were also “Flashes” (not yet called “Random Notes”) about Hendrix, the Who, Bob Dylan, Jerry Lee Lewis, Country Joe, and of course the Beatles (“New Directions for Beatle Business”). According to Joe Hagan’s Sticky Fingers, these were probably based on articles from the UK weekly Melody Maker, rewritten by Susan Lydon.

Ralph Gleason’s “Perspectives” column was about how rock groups are changing the historical business relationships by making decisions communally as a band as opposed to unilaterally by a manager or leader as had been the case historically, and was insisted up by the American Federation of Musicians.

“I can see the day coming when bands will operate their own agencies cooperatively, in which the agent really does work for the group. I see them running their own concerts (as only the biggest acts have done so far–Dylan Beatles, Belafonte, etc.) and eventually making their own records and then leasing them to the record companies.”

Interesting to think about the ways Gleason’s prediction did and did not come true.